What Did America Offer North Korea at Working-Level Talks? One Report Claims To Know. 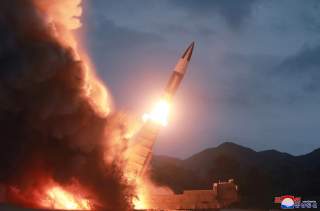 Do we finally know what U.S. negotiators offered North Korea at recent working-level talks that broke down in just a few hours? According to several news reports, citing just one anonymous source, we just might have an idea.

The offer might look familiar, as it is similar to a reported U.S. offer that had been in the press. According to the Korean outlet Hankyoreh which picked up a report in the Japanese newspaper Yomiuri Shimbun, the deal Washington pitched Pyongyang looked like this:

The US offered to temporarily suspend the ban on North Korean exports of coal and textiles as a reward for denuclearization. After the working-level meeting in Stockholm on Oct. 4-5, North Korea declared that the talks had broken down and claimed that the US had shown up “empty-handed.” The US State Department countered by saying it had brought “creative ideas.” The Japanese paper said that these “creative ideas” were the rewards offered during the talks.

The Japanese newspaper reported that the US had proposed two conditions for easing sanctions. First, the US asked North Korea to promise that it would hand over all nuclear weapons and materials in its possession and completely dismantle facilities related to nuclear, chemical, and biological weapons and ballistic missiles. Second, it asked the North to completely dismantle its Yongbyon nuclear complex and to effectively halt its uranium enrichment activities. The US apparently indicated that, if North Korea agreed to those conditions, the US was willing to not only provisionally lift the embargo on coal and textiles but also allow humanitarian aid to the North and officially declare the end of the Korean War. According to the Yomiuri Shimbun, North Korea retorted that the US’ conditions were excessive and asked for all sanctions to be lifted.

The newspaper said that North Korea complained to the US that it hadn’t been rewarded for its suspension of intercontinental ballistic missile (ICBM) and nuclear weapon testing. Furthermore, North Korea asked the US to halt its joint military exercises with South Korea, stop deploying cutting-edge weaponry to South Korea, and to refrain from deploying strategic bombers capable of carrying nuclear weapons to the Korean Peninsula. According to the newspaper, the US responded by voicing its concerns about North Korea’s launch of the Pukguksong-3 missile, apparently launched from a submarine. The launch, US negotiators reportedly said, was entirely unhelpful for dialogue between the two countries.

This, of course, raises a lot of questions as there are key details that would have needed to be ironed out. First and most important, would North Korea give up its weapons of mass destruction, missiles, nuclear material and facilities before sanctions relief comes? Knowing how long that process could take--nevermind confirmed--we could be talking about years for Pyongyang to get any benefit if that is the case.

Second, how would the deal be implemented? This then opens the floodgates to many more questions. What would inspection teams look like? Who would be part of them? Who would determine if North Korea is following the terms of this deal? Are there snapback provisions if Pyongyang cheats?

There is also some strange problems with the deal, or at least the wording of the report. If America demanded the closure of the Yongbyon nuclear facility, wouldn’t that already be covered in the demand to close “completely dismantle facilities related to nuclear, chemical, and biological weapons and ballistic missiles.” What facilities does this cover? Production? As you can see, this report leaves us asking more questions than gaining any sort of clarity, as there seem to be parts missing or jumbled in someway.

But in the end all of these questions are for nothing. Such a deal, if this was the offer to begin with, would have been a non-starter to North Korea as it essentially asks for something close to denuclearization in exchange for just a few sanctions removed. Good luck with that.

Harry J. Kazianis serves as Director of Korean Studies at the Center for the National Interest. You can follow him on Twitter: @Grecianformula.