What Did We Learn From Kim Jong-un’s Absence? 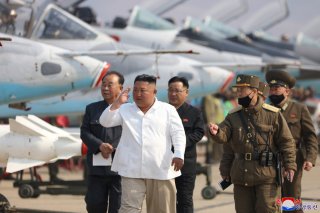 April gave the world Schrödinger's Kim. For three weeks, the North Korean leader was simultaneously both alive and dead.

Competing rumors insisted that Kim Jong-un was dead, brain dead, and gravely ill—from heart attack, failed heart surgery and an exploding missile. He was also healthy and walking around Wonsan.

Kim’s reappearance ended speculation about a sudden North Korean succession. It should also spark self-reflection among those who so readily passed along information from sources that turned out to be horribly wrong.

As an intelligence agency would do, those journalists should question whether their sources didn’t have the access that they claimed, had faulty analytic skills, or were motivated to provide misleading information. Didn't the many conflicting theories raise skepticism about the validity of what they were being told?

A number of lessons may be gleaned from the crescendo of false rumors.

First, despite our best efforts, the Kim regime remains an information black hole. The U.S. Intelligence Community calls North Korea the ‘hardest of the hard targets’ for a reason. Reportedly, the CIA, as well as North Korean ministries, didn’t know that previous leader Kim Jong-il was dead until the official announcement two days later.

Second, long-time Korea watchers were those most strongly counseling that we didn’t know Kim’s condition and would have to wait either for him to reappear or for an official announcement of his death. Caution was merited since, over the years, there have been many false rumors about the death of all three North Korean leaders, as well as executions of officials who later re-emerged.

Third, North Korean governance is reliant on the health of one individual—Kim—who is in abysmally poor health and may be one chocolate wafer away from a heart attack. That underscores the potential brittleness of regime stability as well as the fearful consequences of a botched transfer of power.

Fourth, there is no formal North Korean succession plan nor formal announcement of who is next in line. The next leader could be Kim’s sister (the sibling he didn’t assassinate), his uncle (the one he didn’t execute), or a non-Kim family senior government official (one who hasn’t already been purged).

Fifth, North Korea is under enormous strains from the cumulative effects of decades of economic mismanagement, international sanctions, and the regime’s draconian COVID isolation measures. The disease led Pyongyang to close its borders and curtail trade with China, which is responsible for 90 percent of its foreign trade. Indeed, the regime even reined in the state-run smuggling it uses to circumvent international sanctions.

What happens if Kim dies? There is no evidence that the next leader, regardless of who it is, would pursue policies any less threatening to its citizens or its neighbors. Some have perpetuated the myth of “reformers” or “soft-liners” within the regime as a way of excusing regime behavior or to advocate offer yet more concessions to North Korea.

North Korea may have a behind-the-scenes succession plan and Kim may be taking steps to secure his legacy. As it has twice before, the regime is likely to defy predictions of its imminent collapse and instead perpetuate itself into the next generation of leadership.

But uncertainly in leadership succession in a nuclear weapons state is beyond worrisome; it’s potentially dangerous. To date, succession in North Korea has been a blood sport. This is a real-world Game of Thrones, and many may want to sit on the Iron Throne or become the King of the North.

Many worst-case scenarios could occur. Kim’s sudden departure could spark a potential explosion of lashing out at South Korea or an implosion or regime collapse, internal civil war, and potential loss of control of nuclear weapons.

The United States should coordinate with South Korea and Japan to identify intelligence shortfalls and how to address them. The United States should also resume military exercises with South Korea. These have been on hold since the Singapore summit, in hopes of prompting reciprocal action from Pyongyang. It hasn’t happened, and there’s no point in risking degradation of our joint force deterrent.

Washington should also stop pulling its punches in implementing maximum pressure. It should actively enforce its own laws against North Korean and Chinese sanctions violators. The Trump administration should also drop its demands for exorbitant increases in allied contributions for the cost of stationing American troops overseas.

Kim Jong-un’s recent absence provided a dry-run of how Washington and its allies would collectively respond to a real North Korean leadership transition and potential crisis. Frankly, the results weren’t impressive. But hopefully, it can provide the catalyst for improving U.S. policy in the near term and better prepare for a future crisis.