What Does the Afghanistan Disaster Mean for the U.S.-ROK Alliance? Nothing. 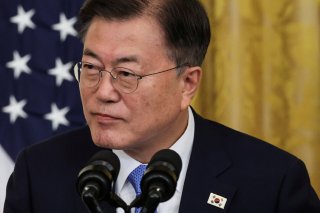 Washington’s long overdue but tragically botched exit from Afghanistan has caused mass hysteria among America’s allies. NATO-lite members grown used to doing as little as possible to defend themselves watched in horror the terrible abandonment of Afghans who backed the United States over the last two decades.

European leaders were left whining loudly about the possibility that Washington might drop them, perhaps imagining being airlifted out of their respective capitals just ahead of the advancing Russian hordes. The obvious response—do more for yourselves!—apparently never crossed their minds.

Some of the same fears appear to have infected South Korean leaders. For instance, conservative presidential candidate Hong Joon-pyo called the U.S.-Republic of Korea (ROK) alliance “faltering” and insisted that the relationship “should be strengthened as a major pillar of our diplomatic security,” a standard mantra during good times and bad.

The opposition party’s legislative spokesman, Kang Min-kuk, issued a similar warning: “Unless its partner has strong defense capabilities and strong will for self-reliance, the United States could leave the partner to pursue its own national interests. The Moon Jae-in government and the military should do their best to strengthen the Republic of Korea-U.S. alliance and maintain a strong military, using the Afghan situation as a turning point.”

Song Young-gil, leader of the governing party, came to a similar conclusion: “We have to take the Afghanistan crisis as a chance to strengthen self-defense capability through” transfer of operational control of the South Korean military to Seoul. He advocated a more effective ROK force: “we also need to have the attitude to foster cooperative self-defense, that we defend our country ourselves, which is why we have to take over wartime OPCON transfer as soon as possible.”

President Joe Biden sought to dampen such speculation, affirming America’s membership in its historic Asian and European alliances. However, that did not satisfy the usual suspects in the infamous policy "blob." Washington, D.C., was awash in establishment thinkers—in government, think tanks, and media organizations—worrying about lost “credibility” and insisting that the administration do something to reassure all of America’s defense welfare clients that the U.S. will always, forever, defend them, irrespective of the circumstances and America’s interests.

However, the apparent discomfort being felt by Washington’s nominal allies is to its advantage. Today prosperous and populous nations around the world play Uncle Sam as a fool, acting as if their defense is more important to the United States than to them. However, one of the advantages of being a superpower is that while it has interests almost everywhere, very few of them are important, let alone vital.

Afghanistan is about as far from the United States as anywhere on earth. The former is surrounded by China, Russia, Iran, India, and Pakistan, among others. America and its allies are far better off out than in when it comes to Afghanistan. And, frankly, Washington would be better off without many of its other allies, which should be defending themselves instead of leeching off the United States.

A second-best of sorts is having allies nervous and determined to do more if they are not certain that America will always be there to do their job for them. Contra the experience of the Afghan government, which melted away, both Kang and Song emphasized the importance of Seoul doing more and creating an effective defense. That is good for the United States even if Washington still is involved.

Afghanistan’s collapse also appears to have spurred support for South Korean access to—if not necessarily development of—nuclear weapons. North Korean defector turned South Korean legislator Thae Yong-ho, echoed the nineteenth-century British statesman Viscount Palmerston: “The lesson for us from the Afghan crisis is that there are no permanent enemies or permanent allies in this world. There is only national interest.” Thae’s solution? Absent North Korean denuclearization, the ROK “should present a strategic timetable to the United States and China and announce that we will inevitably pursue nuclear development.”

This might sound radical, but it, too, would be to Washington’s advantage. Thae’s threat, if adopted by the government, would demonstrate to the North that developing nuclear weapons is not cost-free. Rather, Pyongyang might find itself facing South Korean nukes. This would also be an unpleasant development for China, which would have a greater incentive to press the Democratic People’s Republic of Korea to make a deal. Certainly, the United States would be better off if it was not holding its own cities hostage in an attempt to protect other nations.

Allied complaints about America’s withdrawal from Afghanistan are risible. Washington has a right, indeed, an obligation to put its own people’s interests first. The United States should have left nineteen years ago. Moreover, most of those so worried about remaining on Washington’s generous defense dole do so because they prefer to have a rich cousin pick up the tab, not because they are helpless.

In any case, Asian and European nations are more important to America than is Afghanistan and they have far more lobbyists and quasi-lobbyists in Washington, D.C. The latter include legions of think-tankers and columnists who chant in unison that virtually every bilateral relationship with the United States is more vital than ever before. So, the likelihood of Washington’s withdrawal from these other one-way military commitments remains very small.

Allied shock over Biden’s Afghanistan pull-out is not serious. Unfortunately, there is no evidence that American policymakers are considering force withdrawals elsewhere, irrespective of how strong the justifications for doing so. However, the most likely allied response, to do more on their own behalf, is quite positive.

It shouldn’t take a geopolitical disaster halfway around the world to get the ROK to better protect itself. But if that is what is necessary, then so be it.