What if China Offered a Nuclear Shield to North Korea? 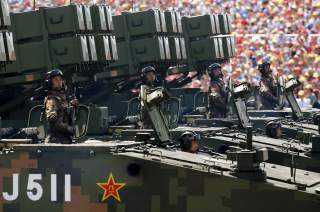 What if China offered a nuclear shield to North Korea in exchange for denuclearization?

A nuclear umbrella is a guarantee by a nuclear weapons state to defend a non-nuclear allied state. It promotes nonproliferation by allowing states to access nuclear deterrence without nuclear weapons of their own. The American nuclear umbrella, for instance, is an important reason South Korea abandoned its nuclear ambitions in the 1970s. A Chinese nuclear shield over North Korea is a realist solution that similarly obviates Pyongyang’s case for a homegrown program while still enabling it to reap the security benefits of nuclear deterrence.

According to Pyongyang’s unilateral deadline, President Trump has until year’s end to produce a more dramatic proposal on North Korean denuclearization. Pyongyang has warned the United States of an ominous “Christmas gift” and claims it is no longer interested in denuclearization talks unless Washington first terminates its “hostile policy.” North Korea maintains its nuclear weapons are necessary for regime security and that it will only exchange its arsenal for a credible security guarantee.

But the United States has never been in a position to issue that guarantee. The elephant in the room is the U.S.-South Korea alliance, which Pyongyang calls “hostile” but Washington considers non-negotiable. Even the recent postponement of joint military drills with South Korea has failed to abate North Korean angst. North Koreans religiously invoke the demise of Libya’s Muanmaar el-Qaddafi to justify their basic mistrust of American promises. In a sense, Pyongyang has been barking up the wrong tree for insurance it is unlikely to trust. The current impasse is no surprise given this fundamental misalignment of interests.

Instead, North Korean security finds a more natural overlap with Beijing’s. China opposes a nuclear North Korea, whose provocations strengthen the Washington-Seoul-Tokyo triangle. Beijing remains deeply anxious about potential regime instability in the North, chaos near its own borders, and the expansion of American influence in its neighborhood. Already, China and North Korea are in a nominal mutual defense treaty; already, it is presumed China would not sit idly by in a contingency on the Korean Peninsula. Beijing’s desire for regional power also means it wants to assert itself at the denuclearization table. Xi Jinping has held five summits with North Korean leader Kim Jong-un in the last two years alone. Meanwhile, nonproliferation remains one place where Chinese assertiveness advances American security.

In other words, there is a convergence: North Korea seeks safety from the United States, and China has a strong incentive to provide that guarantee and banish both nuclear weapons and potential instability from its borders. An explicit Chinese security umbrella only formalizes the natural overlap in Chinese and North Korean security and is a far cheaper price for denuclearization than the concession of U.S. power on the Korean Peninsula. Editorials from Chinese state-run Global Times suggest Beijing may already be open to letting North Korea trade in its weapons for a nuclear shield.

A Chinese nuclear umbrella also solves a major contradiction in Beijing’s strategy that has been the bane of American policy toward North Korea. Beijing supports denuclearization, yet simultaneously fears Pyongyang’s collapse. This dual stance has impaired Beijing’s capacity to support a punitive sanctions campaign aimed at North Korea’s throat. A Chinese nuclear umbrella is a software update that creates space for China to support North Korean denuclearization without having to endanger North Korean stability. It reallocates the responsibility of denuclearization to the cheapest cost avoider by identifying Beijing, rather than the United States, as the most efficient guarantor of North Korean regime security.

Even for North Korea, which insists on “self-reliance,” a Chinese nuclear umbrella is a more attractive bargain than the best deal it could get from Washington—a peace treaty that would still leave Pyongyang feeling naked against the US-South Korea alliance. Through a Chinese shield, Pyongyang gets both access to nuclear deterrence and an invitation to integrate with the world as a reward for denuclearization.

The United States and North Korea now have less than fifteen days to achieve a breakthrough in denuclearization talks before Pyongyang’s ultimatum expires on December 31. The alternative to a creative solution could be the resumption of nuclear tests and long-range missile launches that endanger American lives. The current window of engagement may well be the last opportunity to prevent Pyongyang from perfecting its capacity to threaten the entire U.S. mainland. A Chinese nuclear umbrella is a powerful bargaining chip that could engineer the breakthrough Washington urgently needs.

Brian J. Kim is a Kerry Fellow for Secretary John Kerry and a Korean affairs commentator with a forthcoming J.D. from Yale Law School, M.A. from Peking University, and A.B. from Princeton University. His writing on East Asian geopolitics has appeared on The Diplomat, Lawfare, Asian Jurist, and The Asan Forum.