What if North Korea Launches a Satellite? 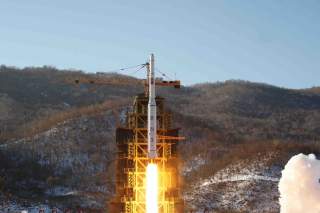 Multiple reports are circulating in the news media that North Korea has tested a new, larger, and more capable rocket engine. There is growing concern that Pyongyang may be about to give the United States and the rest of the world an unwanted Christmas present by launching a long-range missile. U.S.-DPRK negotiations regarding Pyongyang’s nuclear program and related issues have stalled noticeably since the much-ballyhooed “photo-op” summit between President Trump and North Korean leader Kim Jong Un at the Demilitarized Zone in June. Kim may have decided that the launch of an ICBM into the central or eastern Pacific would prod Washington both into giving the bilateral negotiations higher priority and into making significant concessions.

Such a move would inflame tensions throughout East Asia to an alarming extent, empowering hardliners in the United States and Japan who have opposed President Trump’s pursuit of a rapprochement with North Korea from the beginning. North Korean leaders must be aware of the underlying dangers if they conduct an overtly military missile test.  But what if Pyongyang chooses to use the new missile engine to launch a satellite into Earth orbit instead? It is not entirely clear how the United States and its East Asian allies would (or should) react to that development.

North Korea apparently tried to achieve the goal once before—in 2012—although the launch failed. Pyongyang has made noticeable progress on its missile technology since then, and the leadership may be ready for another attempt. A satellite launch would create an acute policy dilemma for U.S. officials. Ostensibly, such a launch would be for peaceful, scientific purposes, and it would be a justifiable source of national pride for North Koreans. However, a missile capable of putting a satellite into orbit also would be able to strike a long-distance target with a nuclear warhead.

Understandably, U.S leaders do not want the DPRK to possess such a capability, since it would bring portions of the continental United States (and perhaps the entire country) into range for an attack. However, does the United States and its allies have the right to demand that North Korean scientific and prestige ambitions remain hobbled? Could U.S. leaders even enforce such an edict short of a willingness to take preemptive military action against North Korean launch sites—an action that could well trigger general war on the Korean Peninsula? Preemptive strikes also would most likely lead to widespread condemnation throughout the international community, further damaging Washington’s already frayed reputation.

In short, if Kim decides on an indirect, ambiguous provocation rather than a blatant one, he could create consternation and nasty policy problems in Washington, Seoul, and Tokyo. The best path out of such a dilemma is to revive the stalled bilateral talks between the United States and the DPRK and make a concerted effort to establish a normal relationship between the two governments.

For that goal to have a decent chance of success, though, U.S. officials must adopt more realistic expectations and drop their demand for North Korea’s complete denuclearization. Clinging to that implausible objective creates the likelihood of a continued diplomatic impasse, eventually followed by a breakdown of negotiations and the resumption of extremely dangerous tensions. Whatever slight chance once existed that Pyongyang would agree to renounce its ambitions for a nuclear deterrent disappeared when the United States and its allies negotiated a similar agreement with Libya’s Muammar Qaddafi regarding that country’s embryonic nuclear program and then just a few years later launched a regime-change war that overthrew him. North Korean leaders learned that the possession of a nuclear arsenal may be the only way to prevent Washington from pursuing a similar strategy toward the DPRK.

The lack of trust regarding the nuclear issue is emblematic of more widespread suspicions and wariness on both sides. There are initiatives that Washington can and should take to reduce the toxic nature of the bilateral relationship. One measure would be a partial lifting of the existing economic sanctions against the DPRK in exchange for a verifiable freeze on Pyongyang’s nuclear and missile programs. Ultimately, the goal should be to lift sanctions on all products not having direct military applications. Another important diplomatic step would be to commence negotiations for a peace treaty to officially end the Korean War. A third step would be to establish full, formal diplomatic relations between the United States and the DPRK, including the exchange of ambassadors.

All of those initiatives would aim to develop a normal bilateral relationship. Given the autocratic and brutal nature of the North Korean government, the United States and the DPRK are unlikely to become friends.  But Washington has developed cooperative relations with numerous autocratic regimes over the decades. Indeed, the United States has forged constructive relationships with former enemies, despite the continued ugly nature of their entrenched authoritarian governments. Vietnam and China are two prominent examples. A similar relationship is possible between Washington and Pyongyang. Under such circumstances, U.S. leaders should then be able to make a distinction between a peaceful satellite launch and a menacing ICBM test and adopt a policy of tolerating the former.

Ted Galen Carpenter, a senior fellow in security studies at the Cato Institute and a contributing editor at the National Interest, is the author of 12 books and more than 850 articles on international affairs.  Among his books is the Korean Conundrum: America’s Troubled Relations with North and South Korea (co-authored with Doug Bandow).