What Kim Jong-un Should Say at Korean Workers’ Party Congress 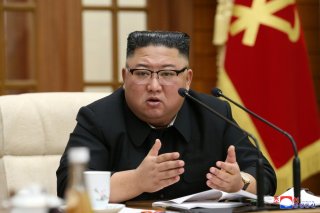 North Korean Supreme Leader Kim Jong-un will set his nation’s course at the Eighth Party Congress of the ruling Workers’ Party of Korea (KWP) in January. It’s the first such meeting since 2016 and is likely to showcase his economic and military plans. He should use the opportunity to propose a path forward with the incoming Biden administration.

Five years ago Kim detailed his commitment to developing both nuclear weapons and the economy. He succeeded with the first. Despite the insistence of the last five U.S. presidents that the North could not be allowed to possess nuclear weapons, it is a nuclear power. Indeed, by some estimates, Pyongyang may possess upwards of seventy atomic bombs, with the ability to produce another half dozen every year.

Economic progress has lagged, however. In April 2012, shortly after taking power, Kim announced “the party’s steadfast determination to ensure that the people will never have to tighten their belt again.” Alas, those hopes went a glimmering. The KWP subsequently admitted that the “planned attainment of the goals for improving the national economy [had] been seriously delayed and the people’s living standard [had] not been improved remarkably,” Kim even tearfully acknowledged his failure in his talk accompanying the October military parade.

The barriers to growth are significant. First, the regime has essentially halted policy reform, even increasing its control over state enterprises, perhaps to prepare for tougher times ahead. Second, U.S. and international sanctions were tightened as the Democratic People’s Republic of Korea forged ahead with its nuclear and missile programs. Third, in 2020 the DPRK isolated itself in response to the Covid-19 pandemic.

The coming year could prove to be the most challenging yet for Kim, with a new administration taking over in Washington. What approach President Joe Biden will take toward the North, especially amid worsening U.S. relations with China, remains unclear. Indeed, the issue is likely to be well down Biden’s priority list, preserving Kim’s uncomfortable limbo.

Traditionally the North’s modus operandi with a new administration is to win attention with a provocation, usually either a missile or nuclear test. Kim might be tempted to do the same early during the Biden term. However, doing so would strengthen Washington, DC’s many DPRK hawks, who were in eclipse during the Trump presidency, and weaken if not kill any Biden administration inclination to reduce or lift sanctions.

If Kim is serious about reaching an agreement with America, that is, one which the incoming U.S. president would sign, he needs to communicate his willingness to both move toward denuclearization and dicker over the terms of doing so. The most effective means would be to use the upcoming party congress to showcase a conciliatory program.

How to promote negotiations with America?

First, offer a positive vision for the DPRK which the United States and allied states could accept if not embrace—a more market-oriented economy and less regimented society. Resume economic reform. Reopen the door to humanitarian NGOs. Request provision of the coronavirus vaccine for his people. Seek support to upgrade the North’s health infrastructure. State his willingness to speak as an equal with any nation about human rights. Indicate the prospect for further change if allied hostility is replaced with cooperation. That is, the government is willing to adapt to international shifts if countries antagonistic to the DPRK do likewise.

Second, emphasize a desire to work with the Republic of Korea to further reduce tensions on the peninsula. President Moon Jae-in has sought to do so, only to be hamstrung by Washington’s refusal to relax sanctions. Moon has lost credibility at home—his approval rating has slipped to 40 percent—and needs evidence of reciprocity to credibly continue his present policy.

Only if the North emphasizes its desire for better relations will Moon have a case to make to Biden’s national security team for selective sanctions relaxation to aid inter-Korean projects. After having spent months dismissing ROK proposals to move forward, in October Kim said he looked forward to when “the North and South take each other’s hand again.” Pyongyang should make a dramatic gesture to counteract so much activity in the other direction, such as blowing up the liaison office constructed by Seoul.

Third, reaffirm the commitment to the Singapore declaration. Even U.S. skeptics of the Trump-Kim summits criticized the statement only for its brevity and lack of detail, not the substantive points made. Most important, Kim should make explicit what his officials said at the time: the sequence established was intentional. Denuclearization is possible only after relations have been improved and regional peace has been established.

How to do that? The two governments should start talking. Other ideas include: lifting the travel ban; opening liaison offices; meeting regularly; discussing all issues, including human rights; encourage cultural, sports, and other exchanges; inviting DPRK participation in international organizations; signing a peace declaration and negotiating a peace treaty; discussing small deals trading U.S. sanctions relief for DPRK arms reductions. Obviously, experience offers a clear warning to Washington that the effort could fail. But no harm would come from trying.

Fourth, make a specific offer. Invite Secretary of State Antony Blinken or National Security Jake Sullivan to visit to negotiate an agreement regulating DPRK missile and nuclear tests and U.S. and South Korean military exercises. Or propose something akin to the Comprehensive Military Agreement between Seoul and Pyongyang to reduce border tensions. Or suggest another accord of limited impact but substantial symbolic value. Biden indicated a willingness to engage but only to achieve practical results. By offering a specific proposal the North would encourage the incoming administration to make North Korea a priority.

Historically Pyongyang would be unlikely to take such steps, but Kim’s ambitions require a dramatic break from the status quo. Kim already has abandoned his father and grandfather’s isolationist approach. He emphasized the importance of economic development and participated in international diplomacy. His economic reforms, though seemingly moribund, nevertheless went further than anything before him.

He also has spent time in the West, which showed him firsthand the productive power of market societies. Refusing to open his nation to that potential would ensure its ever-greater eclipse by neighbors including, most ominously, the ROK. That would frustrate his efforts to deliver a better future to his people, leaving the nation impoverished economically and technologically. That, in turn, would limit his ability to increase his nation’s military strength and international influence.

Most important, refusing to move forward would put his own regime at risk. The status quo is unstable. It would be difficult to allow his people forever only a glimpse of the world around them—with cell phones, flash drives filled with South Korean movies and TV shows, and foreign goods traded in markets and sold in stores, but no real economic prosperity or opportunity. Dissatisfaction could not help but further increase along with the widespread popular realization of all that is being sacrificed for ideological ends.

However, attempting to again hermetically seal the DPRK’s borders over the long-term would risk catastrophic failure. Just a year of Covid-19 isolation has been extraordinarily difficult, with the North reliant on Chinese aid. Too many North Koreans already have seen the outside world. They would know what they were losing—permanently. Rolling back privileges and benefits amassed in recent years would ensure unrest among the elites upon which Kim relies to rule. Even his closest retainers might imagine the benefits of a leadership change.

If Kim hopes to rule for decades—he already has passed the halfway mark of his father’s reign—his government needs a firmer foundation. And that requires moving his country forward economically and reducing tensions with his neighbors, most importantly South Korea and Japan, as well as the United States.

The upcoming KWP Congress occurs at a critical juncture for Kim. How will he move his nation beyond its Covid-19 isolation? How will he engage the incoming Biden administration? Coming up with the right answers could decide the DPRK’s course for decades.