What North Korea’s Missile Testing Means for the Korean Peninsula 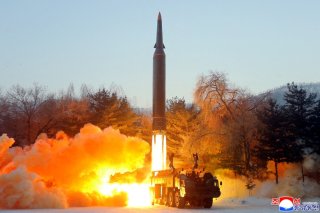 Going forward, they may decide to show off strategic weaponry at a large-scale parade organized for Kim Jong-il’s eightieth birthday, and/or for a parade organized for Kim Il-sung’s 110th birthday. They could also launch more satellites, launch as yet untested submarine-launched ballistic missiles (SLBMs), and/or begin work to restore the Punggye-ri nuclear test site. Hence, the first half of the year is likely to bring further deterioration in U.S.-North Korean relations, and greater military tensions on the Korean peninsula.

Just as the United States and South Korea feel threatened by the North’s nuclear and missile programs, so too does the North perceive joint U.S.-South Korean military exercises and large increases in military spending by South Korea. Hence, going forward, a new government in Seoul (which will take office in May following the presidential election in March), the United States, and South Korea need to thoroughly reexamine their negotiating strategy toward the North. North Korea lacks the capacity to mount a sustained war, with its extremely weak air and ground force capabilities. Hence, to demand it completely surrender its missile and nuclear capabilities is tantamount to demanding it to completely disarm.

The only path forward in negotiations is likely to be difficult require compromise: to tacitly accept North Korean missile developments while pushing the North to reduce its nuclear capabilities. Further, in order to bring North Korea back to the nuclear negotiating table, the United States and South Korea should consider offering to scale back or suspend joint military exercises in exchange for the North agreeing to freeze its nuclear program and subject it to inspections. If the North begins nuclear force reductions, there is clearly a need to consider the cancellation of such exercises altogether. Most South Korean and U.S. experts think that joint exercises can be continued while the North is made to give up its nuclear weapons, but such an approach is completely unacceptable to the North.

If North Korea continues to reject denuclearization negotiations, then there is no way for it to obtain relief from international sanctions, and U.S.-South Korean joint military exercises will continue. Thus, the next South Korean government and the Biden administration must make these realities clear to the North. If the North Koreans persist in their refusal to engage in dialogue, the South Korean government should demonstrate its own capacity to operate a combined missile system incorporating ground forces, air force, and navy by establishing its own strategic command. In doing so, it can effectively counter North Korean missile deployments.

This article is a revised and abridged version of an article that appeared in Korean in the February 2022 Sejong Institute’s journal Current Issues & Policies.

Cheong Seong-Chang is the Director of the Center for North Korean Studies at the Sejong Institute.