What Is the North Korea’s Recently Minted 'General Secretary' up To? 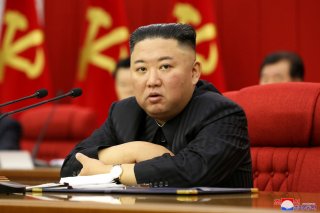 Although anointed Supreme Leader, North Korea’s Kim Jong-un recently added a more prosaic title: that of General Secretary of the Worker’s Party of Korea. His father held that post, but it had remained open since Kim pere’s death in December 2011. Some observers assumed that the job would be left forever unfilled to honor his father, rather like his grandfather had been declared “eternal president.”

However, noted long-time analyst Andrei Lankov for NK News, Kim’s resume padding might mean something ominous. Lankov noted that this move leaves a first secretary as the general secretary’s deputy. He explained: “it is as though North Korea suddenly introduced a close equivalent to the position of vice president. This is unusual: No other ruling communist party has had a formally defined position of second-in-command—a ruler in-waiting.”

The reshuffle could merely reflect a bout of responsible governance, since the deputy position allows a formal delegation of power, a positive step in a system known for micromanagement at the top. Nevertheless, until now being perceived as regime number two has not contributed to longevity under Kim. The Supreme Leader didn’t want anyone to believe that he was not indispensable.

An alternative theory is that the party fears Kim’s possible demise. Contended Lankov: “All these moves have only one reasonable explanation. The top leadership of North Korea, for some reason, has begun to make preparations for the sudden death or, more likely, long-term incapacitation of North Korea’s current leader. From now on, Kim can appoint a person who will automatically take over his duties should the need arise. On top of that, Kim can essentially empower the members of the Permanent Committee to assume the role of acting chief executive.”

Indeed, Kim’s recent loss of weight set off a debate over whether that was good or bad news. Long known as “Fatty Kim” on irreverent Chinese social media, he recently reappeared in public view after losing weight. Does that reflect sustained effort to improve his health? Or did it result from a significant medical problem? Last year his extended absence from public view triggered an extended debate over his health. Rumors of his death obviously proved false, but speculation remained that he had undergone a less serious medical procedure. Most likely, concluded Pyongyang watchers, he had cut public appearances to reduce the risk of catching coronavirus.

The possibility of another North Korean succession so soon after his father’s death understandably has observers unsettled since there is no obvious successor. Lankov pointed to Cho Yong-won, a trusted Politburo official, as a possible candidate. However, Kim disposed of all the “mentors” provided by his father, including, most shockingly, his uncle, and just two years after taking power. Perhaps Kim would trust someone he chose as number two, but he has cycled through many appointees for top posts. Cho might last no longer than anyone else. Moreover, anointing someone as apparent successor would exacerbate tensions among the many others who believed it was their turn to ascend the political summit if Kim died or was incapacitated.

Some analysts hype the importance of any North Korean leader possessing royal blood—that is, descending from Kim’s grandfather and the nation’s founder Kim Il-sung. Although this factor is often cited, it likely matters little to the cynical elite which rules the Democratic People’s Republic of Korea. After all, more than seven decades into the dynasty they have little illusion about rule-by-Kim. Nor does family myth-making work as well today with the broader population given the increase in outside information now available to most North Koreans.

Anyway, what Kim family candidates are available? His children are much too young and his wife has no political role. His male relatives are variously unrecognized, unsuitable, and/or untrained—a couple of nephews, an uncle, and an older brother. His sister, Kim Yo-jong has his confidence but no apparent independent power base, and her sex remains a huge barrier in a system where every other major political figure is male.

The most interesting question is whether he wanted to create the deputy position and plans to fill it. Although he is widely presumed to rule absolutely, there is some dissent, contending that Kim must share power with hardliners. In which case the decision might have been pressed if not forced upon him. If not, perhaps he sought to assuage concerns expressed by his loyal confidantes and retainers. Maybe he is genuinely worried about his mortality or simply desires to have a recognized second-in-command to whom he can delegate. If and when Kim selects that someone outsider observers might gain a better sense of his intentions.

Fears over Kim’s longevity, if widespread within the leadership, are likely to incline the North toward stasis. After all, Pyongyang already is under great strain. Fear of the coronavirus pandemic encouraged the regime to essentially sanction itself, largely cutting itself off from the rest of the world, including China. Moreover, Kim acknowledged his nation’s growing food shortage, about which he recently convened a central committee meeting. His talk of an “arduous march,” the euphemism for the terrible famine of the 1990s, should leave anyone dealing with the DPRK nervous.

This would be a difficult time for any leadership change, which in the near term very likely would shift control outside of the family for the first time since 1945. A bitter factional fight, especially if Kim passed from the scene, could put the regime at risk. If control loosened a destabilizing mix of economic hardship, Chinese pressure, and greater South Korean influence could generate public and, more important, even elite unrest.

With the DPRK on course to have 200 nuclear weapons within the decade, an unstable North Korean regime could be dangerous to the region and beyond. Although bilateral and multilateral pressure currently is intended to denuclearize the North, that result will be less likely if Kim’s hold on power is more limited in reach or length. Even if persuaded to disarm, which seems very unlikely, he would be less able to impose an agreement on the military and hardline party members. Even more so a successor not yet able to consolidate power.

Of course, the end of the Kim dynasty should be a positive development. However, a messy departure at a time of turmoil might turn out to be a cure worse than the disease. Such a crisis likely would exacerbate problems for Washington and Seoul.

Both are distracted and have few means to influence the DPRK. President Joe Biden remains focused on domestic issues and sees the Koreas as a lesser international priority, behind China, Russia, and Iran, at least. The Republic of Korea is rapidly approaching a presidential election that the opposition might win. If so, ROK policy will turn sharply negative toward the North.

Speculation over Kim’s future should prompt discussions among the United States, South Korea, and Japan. Moreover, if there is anything to the Biden administration’s seeming opening to Moscow, Washington should speak with the Putin government about potential upheaval in the North.

Most important would be to engage China on the issue, though it has refused to do so in the past. Nevertheless, the potential consequences of North Korean instability were less dangerous before the North had constructed a substantial nuclear arsenal. The DPRK’s implosion could add loose nukes to mass refugee flows and factional fighting. If collapse looks likely or even possible the PRC might help to stabilize the North, starting with food and energy aid.

Seldom has a national leader’s weight, as evidenced by the state of his watchband, received so much attention. Add to that the governing changes detailed by Lavrov and Washington policymakers should take note. Although stasis in the North is not good, chaotic change might be even worse. Yet again Pyongyang appears determined, even if unintentionally, to thwart an American administration’s efforts to downplay the North Korea issue.