What South Korea’s Election Means for Biden and Democracy 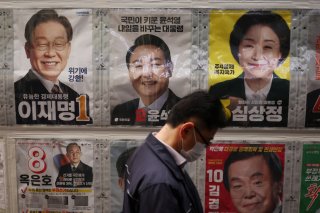 As the world is focused on the devastating crisis in Ukraine, South Korean attention is consumed by a dramatic, contentious presidential election, which will impact the future of South Korea’s democracy and U.S. policy in the region. In politics, it is always too soon to call the race until all votes are cast. This is especially so when the leading candidates from the ruling and opposition parties are neck-in-neck in the polls.

For the first time, this contest on March 9 is between two unconventional candidates whose victory will likely be determined largely by unprecedented young swing voters. Apart from each of the candidates’ fandoms, South Koreans say they have a choice between the “worst and second-worst candidate” from the ruling and main opposition parties. They describe this election as the gloomiest election ever since the country’s democratization began in 1987.

That is because the last five years under progressive President Moon Jae-in have been anything but hopeful for many South Koreans while the two main presidential hopefuls are both unprecedented candidates marred by scandals. Ahead of the snap presidential election in 2017 (upon the impeachment of the previous conservative president, Park Geun-hye), I pointed out that an enormous reconstruction job awaited the next president. Voters back then were tired of the glass ceiling, wide income disparities, and corruption of their political leaders. These frustrations have, on many levels, been exacerbated. Moon’s policies on jobs, real estate, and taxes have hit the youth, the middle class, and small businesses the hardest. Critics in Korea describe these policies as socialist and authoritarian control in disguise. Voters have also witnessed endless reports of corruption scandals and sexual harassment charges by Moon’s closest aides and officials despite proclaiming to be a “feminist president.”

South Korea’s democratization is a triumphant success story, yet every administration was criticized for its share of undemocratic practices. Many South Koreans and foreign scholars say that democratic backsliding gained force under the current Moon government. For the past five years, complaints about unruly governmental control and the erosion of democratic values, norms, and freedoms could be heard almost daily among the broader Korean public, including its media—usually in private whispers for fear of employment termination and government retribution. Instead of consolidating South Korea’s democracy and correcting the undemocratic practices of the previous conservative administration, political sociologist Gi-wook Shin points out that the progressive Moon government “went the other way, exacerbating polarization, eroding democratic norms, and appealing to chauvinistic nationalism.”

South Korean politics is a blood sport. The main focus of this election is twofold for the political elite. First, lawmakers in the progressive and conservative parties are looking mainly at the past. Retribution is the name of the game for the winning party. They are seeking revenge for the tragedies of their respective former presidents and ways to root out each other’s administration’s wrongdoings. Former progressive President Roh Moo-hyun committed suicide in 2009 after his term while being investigated for alleged bribery, and conservative Presidents Park Geun-hye and Lee Myung-bak were put behind bars. Second, this election is a fight to either solidify its party as the new social mainstream and maintain control for the progressive ruling party, or to take back their mainstream position in society, restore liberal democratic values and strengthen national security for the main conservative opposition.

It is no secret that Korea has not been a top priority in U.S. foreign policy in the same way as other Asia-Pacific powers. Yet, Washington should still watch this election closely. The result will determine the state of democracy in South Korea for the next five years in a pivotal corner of the global community. It will also determine whether South Korea will remain as the weakest link in President Joe Biden’s Indo-Pacific strategy, as I warned last year; whether Washington and Seoul will finally be in lockstep to deal with North Korea; and whether South Korea will unambiguously step up to the plate to help protect the rules-based international order, democracy, and human rights around the world.

For the first time, Korea’s upcoming presidential election is a battle among the generations—not regionalism or ideology, which were the dividing lines until now. Young voters in their twenties and thirties (born in the 1980s and 1990s) have unexpectedly emerged as a powerful force. They surprisingly voted for conservative candidates in the April 2021 mayoral by-election, feeling let down by the incumbent progressive government. The so-called 2030 Generation is seen as the swing voters. They are politically neutral or moderate and will influence South Korea’s domestic and foreign policies for the next five years.

Ruling and opposition parties and their candidates have been tailoring campaign rhetoric to appeal to young voters. The main conservative party, known for being agist, unprecedently elected Lee Joon-seok—a mid-thirties political novice yet popular among younger voters—to lead the party and help win the presidential election. Both parties recognize that they cannot change the hearts of voters in their fourties and above, especially those in their fifties and sixties who experienced South Korea’s military dictatorship or extreme poverty having been born during the Korean War (1950-1953) and Japanese colonization (1910-1945).

In contrast, the 2030 Generation is pragmatic and not ideological. They were born into wealthy Korea. As such, they are individualistic and care most about their own financial prosperity first, and national strength in the face of external threats. Many of them told me they refuse to be bound by political party, ideology, or group identities. Unlike older voters, they are not driven by regionalism or historical views either. The “gender conflict” is also hottest in this generation with both men and women feeling discriminated against each other for jobs and opportunities. Some say they are even encouraging each other to vote on election day rather than voting early to prevent any chance of election fraud.

Over time, the salience and relevance of regionalism that determined votes for decades diminished and ideology started to gain traction as the key variable voter attitudes since the 2002 presidential election. In South Korea, conservative and progressive have very different meanings than those in the United States or Europe. They are generally defined by one’s stance on North Korea, Japan, and the United States. The progressive faction in power now and the hard Left are known to be pro-North Korea, anti-Japan, anti-U.S., even pro-China, and nationalists. Conservatives are tougher toward North Korea, pro-U.S., skeptical but compartmentally cooperative toward Japan, and selectively firm toward China. While age is appears to be the key variable for this election, political ideology still matters for South Korea’s foreign policy that will have ramifications for U.S. foreign policy.

This is also the first presidential race with frontrunners who share some unusual traits. Both candidates are far outside the mainstream in their respective party politics. Neither one has legislative experience in the National Assembly. They are also tainted by alleged scandals—from corruption to abuse of power and forgeries—involving their wives and child. Their alleged personal life practices have raised questions about presidential fit, but voters with clear political and party preferences say they are squarely focused on ensuring that the other unfavorable candidate does not win. For now, both candidates have also skirted being subjected to thorough investigations themselves for their alleged scandals because of the election campaign period.

Lee Jae-myung—a former governor and mayor—is the maverick on the outermost fringe of the ruling progressive party. In the 2017 presidential election, his supporters called him “Korea’s Donald Trump” and is known to have a foul mouth. He has been criticized for serving as legal counsel in defense of his nephew, who brutally killed two women. Yet political insiders and analysts say the Democratic Party chose a candidate with the highest chance of winning, mainly to avoid retribution by conservatives if they lose this election. Lee rides on populism and his key claim to fame is providing cash handouts.

Yoon Suk-yeol is called the “ultimate outsider.” He was appointed prosecutor general by incumbent progressive President Moon, with whom he later had a falling out. Yoon chose to run as candidate for the conservative People’s Power Party at the last minute. Yoon was iconic in leading Moon’s campaign to “eradicate deep-rooted evils” from the previous conservative administration. He gained political prominence while investigating Moon’s own inner circle without falling under political pressures from the ruling party to show leniency. The conservative party’s primary motivation to accept such an outsider was evidently retribution—expecting Yoon as president to investigate Moon and his cronies with the same severity in which he investigated former conservative presidents who ended up behind bars. Yoon has his own skeletons in the closet, including his wife claiming on tape that MeToo scandals occurred in the ruling party because victims were not paid off while she is being accused of lying on her resume.

It is not surprising that both Lee and Yoon’s vision for their foreign policies published in Foreign Affairs share more similarities than differences. Their essay drafters are apparently mindful of their American audience and the footprints of former career diplomats advising both candidates are reflected in the nexus of their similarities. Lee and Yoon’s effort to differentiate themselves from the incumbent government is also noticeable as they outline either a more moderate approach than usual (Lee) or a tougher line toward North Korea (Yoon) while both are pledging greater contributions to regional and global affairs.