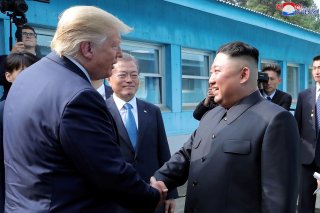 President Donald Trump spent the evening of his September 11 anniversary in a nontraditional place: giving commentary at the Triller-produced boxing match between long-retired former heavyweight champion Evander Holyfield and Vitor Belfort. That appearance was shorter than was likely planned because Belfort won the fight in the first round.

Trump skipped the more traditional commemoration ceremonies attended by most of the other living former presidents and had another activity on his docket Saturday: an address to the controversial group known as the Unification Church.

The group, founded in the 1950s by the late South Korean Reverend Sun Myung Moon, is known as the Moonies, and the event held Saturday is called the Rally Hope. Organized by Dr. Hak Ja Han Moon, Rev. Moon’s widow, the event also featured remarks from the presidents of Cambodia, Republic of the Congo and Niger, and former chief executives of the European Commission, India, The Philippines, and Serbia.

During ten minutes of remarks, which appeared to be pre-recorded, Trump called for “peace and unity on the Korean Peninsula,” calling it “a cause that is very close to my heart.” The former president also touted his own diplomatic opening to North Korea.

“One of my proudest accomplishments as president was to help create a new path towards a brighter future for all Koreans, North and South, a path by which the divisions and hardships of the past might one day be healed to a level that nobody thought possible before,” Trump said.

Trump blamed his predecessors for failing to address the “threat of conflict from that part of the globe.”

“Missiles were flying, nuclear weapons were being tested, and powerful threats were being issued every single day,” Trump said of the situation in North Korea prior to his presidency.

“Under my leadership the United States adopted a policy of unprecedented strength, doing more than any prior administration to ensure that American and its allies would always protect its citizens.”

He noted that the “rhetoric got very, very tough, nasty and mean,” likely in reference to his threat to unleash “fire and fury” and his denunciation of Kim Jong-un as “Little Rocket Man.”

“I knew that while any leader could wage war, it takes true courage to pursue a chance for peace,” Trump said of the diplomatic opening to the North Korean regime. He thanked Prime Minister Moon of South Korea and then-President Abe of Japan for their help with the talks in 2018 and 2019.

While acknowledging that the diplomacy did not lead to a deal, Trump touted that Kim has kept his promise, and that North Korea has not engaged in a “major weapons test” since 2017, although the truth of that depends on how one defines “major.”