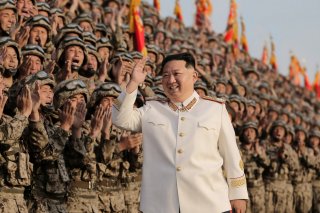 North Korean state media claimed on Monday that the country had successfully contained its first publicly-acknowledged COVID-19 outbreak, claiming that nearly all North Korean affected by the virus had recovered—although these claims were met with skepticism from members of the international community who noted Pyongyang’s fragile healthcare system and extremely low vaccination rate as reasons to be suspicious about pronouncements of the virus’s alleged containment.

The North Korean state-run Korean Central News Agency, or KCNA, claimed on Monday that the government’s “anti-epidemic campaign is improved to finally defuse the crisis completely,” adding that 99.8 percent of the nearly five million North Koreans treated for fever symptoms—one of the only signs of COVID-19 within the country, as Pyongyang lacks the capacity to conduct widespread testing for the virus. The KCNA report added that 310 additional North Koreans had reported fever symptoms and had been placed in quarantine.

However, World Health Organization (WHO) officials expressed immediate skepticism of Pyongyang’s claims, citing a lack of evidence for its assertion that the virus had been contained and speculating that the situation in the country had deteriorated in recent weeks. An anonymous WHO official suggested that the North Korean government may have been motivated to declare victory over COVID-19 by economic concerns, which would allow it to resume long-restricted trade with China.

Cheong Seong-chang, the director of the Sejong Institute’s North Korea studies center in Seoul, suggested that Pyongyang “could announce in less than a month that its COVID crisis is over,” warning that such an action “could be a prelude to resuming cross-border trade,” according to Reuters. However, it is unclear whether China, which is also grappling with a rising caseload, would agree to reopen cross-border trade if Beijing perceived the virus to be widespread within North Korea.

Outside observers have suggested that North Korea, already one of the world’s most totalitarian states, grew even more intrusive during the pandemic, closely monitoring its citizens’ movements to prevent the spread of the virus. Officials in Pyongyang have reportedly blamed the virus’s entry into North Korea on South Korean leafleting campaigns, in which media from the outside world are attached to large balloons and floated into North Korea from the south. In response to the virus, North Korea has warned its citizens to remain away from “alien things.” However, scientific evidence has suggested that surface transmission of the virus is very rare indoors and nearly unheard of outdoors.