Who Is the New Woman in Kim Jong-un’s Circle? 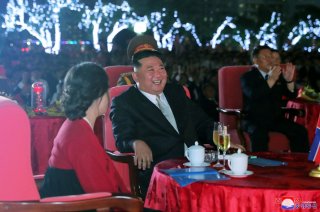 The Guardian reported that a mysterious woman has appeared of late as part of North Korean leader Kim Jong-un’s entourage. The woman, the report said, is often spotted holding a handbag and standing near Kim.

NK News had reported earlier this year on the arrival of the woman, described as someone who “appears to be a young woman in her 30s or 40s,” although they also could not identify her by name or position. That site did speculate that the woman might be Kim’s “mysterious half-sister, Kim Sol Song.”

“She has typically been seen carrying a handbag, possibly containing items the North Korean leader needs on call at all times such as his phone, cigarettes or medicine,” NK News said.

Kim, while remaining an autocrat, has put more women in positions of power than has been the case when his father and grandfather led the country. The leader’s sister,  Kim Yo-jong, is seen as the second-most-powerful official in North Korea—last seen telling the South Korean president to “shut his mouth”—while Kim has also appointed Choe Son-hui as North Korea’s first female foreign minister.

The new aide was seen with Kim last week, when he delivered a major speech vowing that the regime would never give up its nuclear capability.

North Korea, Kim said in the speech, will “never give up nuclear weapons and there is absolutely no denuclearization, no negotiation, and no bargaining chip to trade in the process.” This goes against the premise of most diplomacy, or theoretical diplomacy, that has taken place between the West and North Korea in the last several decades.

The regime is also said to have passed a law to allow retaliating with a nuclear strike in the event of an invasion by “hostile forces,” although only as a last resort.

One recent report also has North Korea preparing for a new nuclear test, which would be its seventh, but the first in several years. The country has, however, conducted several missile tests this year.

“The purpose of the United States is not only to remove our nuclear might itself but eventually to force us to surrender or weaken our rights to self-defense through giving up our nukes so that they could collapse our government at any time,” Kim said in the speech earlier this month.

“Let them sanction us for 100 days, 1,000 days, ten years, or 100 years,” he added. “We will never give up our rights to self-defense that preserves our country’s existence and the safety of our people just to ease the difficulties we are experiencing temporarily.”