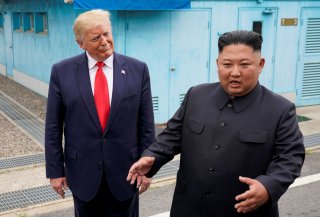 “The strong do what they can, the weak suffer what they must,” lamented Thucydides in his History of the Peloponnesian War. This most acerbic dictum, born out of the Greek historian’s observation of a devastating series of wars across the ancient Mediterranean, seems painfully apparent even in the twenty-first century. The Korean conflict remains one of the most grievous reminders of the bitter legacy of colonialism. It’s a testament to how often smaller nations’ fates are the playthings of superpowers.

Across the Korean Peninsula, one sees not two but actually a singular nation. Throughout history, Koreans considered Paektu Mountain as the birthplace of their forefathers, most prominently Dangun, the founder of the Gojoseon kingdom. The scenic mountain, with its mythical beauty, represented the civilizational boundary between the largely agrarian Korean people and the nomadic Manchus. When the latter managed to dominate post-Ming China, establishing the centuries-long Qing dynasty, Koreans stood as the ultimate heirs of the Confucian world. And yet today, only a select few Koreans, mostly the Pyongyang royalty, have access to this highly symbolic site.

Though it’s hard to say which side of the DMZ has got the better Kimchi, my North Korean hosts have claimed theirs is better. Back in Seoul, I was told by a government-affiliated official, who took us to a North Korean restaurant, that indeed the vegetables are better in the north. It must be the climate or maybe the fact that much of North Korea, unlike the hypermodern South, is untouched by the travails of industrialization. Across the 38th parallel, practically the same language is spoken by people who share the same lineage. Especially compared to other Asian nations such as Iran, India, or the Philippines, where the north-south divide is palpable, one can detect minimal linguistic or physiognomic variations among people from Pyongyang to Busan.

The late political scientist Benedict Anderson once famously described nations as “imagined communities” forged by shared pains, glories, and visions of the future. In short, nations are artificial constructs rather than an organic heritage from “absolutely splendid ancestors.” Upon closer examination, what’s even more artificial is the geopolitical division of the Korean people, whose civilization crystallized over millennia of shared history, traditions, and mythology. The Korean Peninsula’s decades-long division marked the spoils of war on the ashes of a crumbling Japanese Empire. The 38th parallel represented a supposedly transient compromise between the then-ascendant Soviet Union, which established a puppet communist regime in Pyongyang, and the United States, which propped up its own Western-aligned regime under the Harvard-educated Syngman Rhee.

The ensuing Korean War, among deadliest conflicts of the past century, hardened this most artificial division by adding the element of resentment, tragedy, and unfathomable destruction. And yet the Korean people never gave up the dream of unification. Few things better capture the emotional depth and moral urgency of unification than the wrenching reunion of long-divided families, whose fates were altered practically overnight.

Recent headlines, from North Korea’s blowing up of a joint liaison office in Kaesong to its threat of unleashing “leaflets of punishment” across the border, are far from encouraging. With the Trump administration failing to offer any tangible concessions, Pyongyang has found little reason to stick to its side of the bargain, namely shunning further provocative gestures. In the meantime, the dovish occupant of the Blue House, Moon Jae-in, who has played a vital role in the historic U.S.-North Korean summits, is entering his twilight years of office.

Nonetheless, there are reasons for hope. To begin with, revolutions in military technology have made Korean War-like mobilization increasingly unappealing. I doubt even North Koreans, despite all their notorious bluster, are interested in repeating the grinding “total war” that devastated the Korean Peninsula during those opening years of the Cold War. Having mastered nuclear technology, Pyongyang seems less insecure than ever. Though far from paragons of liberal reformism, the pragmatic new generation of millennial rulers in North Korea are intent on closing the yawning technological-developmental gap across the 38th parallel.

And for all his faults and blunders, President Donald Trump has achieved a crucial objective: puncturing the taboo of direct negotiations with Pyongyang, in conjunction with Seoul and full support from like-minded regional actors, from Singapore to Vietnam, which hosted the historic summits in the past two years. As a result, a “grand bargain” between the West and Pyongyang is less improbable than ever, especially if a sound, mature leader occupies the White House in the coming years. If we don’t get a destructive war, then there will be a possibility of one ever-lurking over the horizon; the year 2025 will likely mark a great leap forward for peace on the long-tortured Korean Peninsula.

Richard Javad Heydarian is a Research Fellow at National Chengchi University and the author of both The Indo-Pacific: Trump, China, and the New Struggle for Global Mastery and The Rise of Duterte: A Populist Revolt against Elite Democracy.