Why America Should Normalize Relations with North Korea to Undermine China 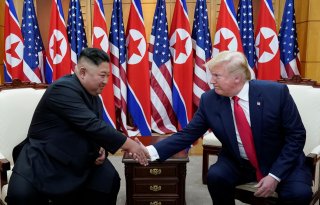 U.S. negotiations with North Korea have been largely stagnant for the past year. Hopes that Washington and Pyongyang might take steps to normalize their relationship, which seemed to gain new momentum at the DMZ “photo-op summit” in late June 2019, soon faded and have not rebounded. The two sides remain at an impasse over U.S. demands that North Korea agree to a complete, verifiable, and irreversible end to its nuclear weapons program. As I’ve written previously, that demand is a nonstarter, and the Trump administration should abandon it to pursue more limited, achievable objectives. Pyongyang continues to exercise some restraint in its behavior, refraining from conducting nuclear tests and limiting its missile tests to short-range missiles rather than the more provocative long-range variety. That relative caution suggests that North Korean leaders still hope to make progress on normalizing relations with the United States.

Indeed, there is now an opportunity for Washington and Pyongyang to improve their relationship and at least mildly undermine China’s regional influence in the process. It is quite apparent that President Trump has opted for a hardline stance against Beijing as a prominent theme in his re-election bid. He blames the Chinese government for the spread of the coronavirus pandemic and his campaign scorns his electoral opponent, former vice president Joe Biden, as “Beijing Biden.”

It’s a smart strategy, given the state of American public opinion regarding China. A Pew Research Center survey of Americans taken in late April showed that 66 percent of respondents held negative opinions of China. A mere 26 percent expressed a favorable attitude. It was the highest percentage of negative views about China since Pew began asking the question in 2005.

But as bilateral relations with Beijing become more tense and confrontational (as now seems inevitable), Trump would be unwise to risk a simultaneous crisis with North Korea. Moreover, moving to normalize relations with that country, China’s longtime ally, would automatically dilute Beijing’s influence over Pyongyang—yet another way to demonstrate mounting U.S. displeasure with the PRC’s behavior.

Establishing normal ties with the United States also would benefit the North Korean government. Not only would it lead to an easing of punishing economic sanctions, it would reduce Pyongyang’s overwhelming economic dependence on China. Contrary to the prevailing myth in the United States, the North Korean regime does not gladly serve as an obedient PRC puppet. Indeed, there is solid evidence that Pyongyang chafes at its longstanding, excessive reliance on its powerful neighbor. A smart U.S. policy would seek to exploit such restlessness instead of continuing to isolate North Korea and thereby perpetuate its dependence on China.

As the U.S. election draws closer, both Kim’s regime and the Trump administration would be wise to reboot negotiations—and do so with far less emphasis on the nuclear issue. Kim especially should avoid the temptation to wait and hope for a more pliable negotiating partner if Biden becomes the next president. Prominent Democrats have excoriated President Trump for even meeting with Kim. Biden would be under intense pressure to take a harder line, not a more accommodating one, in any interactions with North Korea. Both Trump and Kim would benefit from facilitating a normal relationship between Washington and Pyongyang. China would be the only potential loser from such a rapprochement—and that outcome should have some appeal to leaders in both North Korea and the United States.