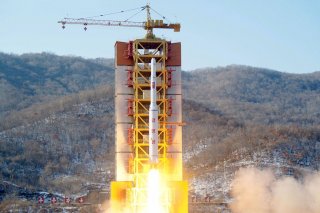 Status quo is the short answer to where U.S.-DPRK relations is most likely heading for the rest of the year. Between the ongoing pandemic, its crushing economic repercussions, and the upcoming presidential election, the U.S. lacks the bandwidth to realistically attempt any considerable new outreach.

And Kim Jong-un needs only a moderate display of force to prove his health and vigor. Since short-range missile tests have already been carried out this year, it makes sense to continue that trajectory of moderate provocation that will not risk the wrath of an unpredictable U.S. president (particularly after the killing of Iran’s Qasem Soleimani).

The eventual goal of denuclearization is one where the United States and North Korea are at fundamental odds. Not because one side wants peace and the other doesn’t, but because both sides speak a diplomatic language the other continually misunderstands.

To North Korea, nuclear weapons are not only the ultimate guarantor of regime survivability, they are also the fulfillment of decades of promises from Pyongyang. And the citizens know very well that part of their privation has been endured for the purpose of developing these weapons. The idea of giving them up without major security and financial guarantees is something that doesn’t enter into North Korea’s calculus.

Denuclearization, in the eyes of Pyongyang, means the removal of American forces in South Korea as well as the guarantee that America will never strike first. To Washington, it often means the nearly immediate “complete verifiable and irreversible denuclearization” (CVID) of North Korea before any concessions could be given.

The Trump administration’s insistence during the Hanoi summit on total denuclearization before any sanctions relief was a bridge too far for Pyongyang. There are numerous small steps that could be taken on the road to CVID, unfortunately, many are still acting like North Korea is developing WMDs, they’re not. They already have them.

Placing limits on the number of warheads, missile ranges, numbers of launchers, stopping construction of new facilities, and more could be part of an incremental process to limit further production and slow the development of future weapon systems.

North Korea is obviously not an honest broker and CVID may not achievable in the near future, but previous attempts at a more gradual approach did in fact slow their activities. The 1994 Agreed Framework provided years of additional time to counter Pyongyang’s nuclear ambitions. Looking back, those years were squandered and in 2017 North Korea conducted its most powerful nuclear test.

Despite the popular misconception that North Korea’s intentions are never clear, their intentions indeed become clear to anyone watching. Through satellite imagery we can follow their equipment build ups for military exercises, see new construction and evidence of testing, and so on. The question becomes, are the right people paying attention?

Regardless of political claims saying North Korea is no longer a major threat, myself, 38 North, the Center for Strategic and International Studies, and many others have painstakingly been following all of North Korea’s weapons of mass destruction facilities. The Yongbyon Nuclear Scientific Research Center hasn’t been shut down. Instead, all laboratories and reactors are being maintained, and the residential area has recently experienced substantial growth.

At the Pungyye-ri nuclear test site only two tunnel entrances were demolished; the rest of the 17-km long complex sits waiting to resume activities whenever the order is given. A newly constructed ballistic missile facility has recently been described in detail, and development of nuclear-capable submarines at Sinpo has ramped up. Even the Hagap underground (suspected) nuclear facility is currently undergoing new construction.

This year has already seen tests of large caliber rockets and a possible “ejection test” that occurred in April at Sinpo as part of their submarine-launched ballistic missile development. While I do not think a nuclear test is forthcoming, especially prior to America’s presidential election, other weapons testing can’t be ruled out.

Although neither “strategic patience” nor “maximum pressure” has done much to advance U.S. goals, Washington has no option but to continue some level of engagement. Whether or not new tactics are tried after the election is something left to be seen.

Jacob Bogle is a U.S.-based North Korea analyst who runs the AccessDPRK blog which uses open-source intelligence to improve the understanding of military, economic, and cultural sites in the country.