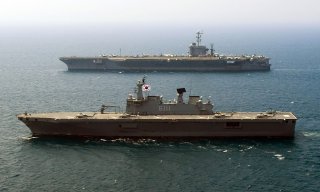 Tensions between the Republic of Korea (ROK) and the communist Democratic People’s Republic of Korea (DPRK) are escalating at an alarming rate. First, North Korea severed all communication lines between the two Korean states on June 8. Now, the DPRK regime has destroyed the liaison office the two governments jointly maintained in the North Korean city of Kaesong. The gleaming blue-glass four-story structure- was “ruined with a terrific explosion,” North Korea’s state news agency KCNA boasted. It was an important and worrisome gesture, since the office was a key symbol of greater inter-Korean cooperation.

That cooperation, which ROK President Moon Jae-in has fostered so diligently the past three years, is on the brink of ruin.  Pyongyang’s ostensible grievance is a campaign that activists opposed to Kim Jong-un’s regime (including a contingent of defectors from North Korea) have been waging from South Korean territory. Those dissidents send balloons with packets of anti-regime leaflets aloft from positions just south of the Demilitarized Zone (DMZ) and watch them float north into the DPRK.

North Korean officials are apoplectic about the campaign, and South Korea is not happy about the strategy either.  Moon’s government has criticized the efforts and taken steps to keep the activists and their balloons back from the DMZ.  But such efforts to placate Kim’s regime clearly have failed. In addition to cutting off lines of communication and obliterating the liaison office, Pyongyang warns that North Korea’s military is “fully ready to move against the South” and is prepared to turn the DMZ “into a fortress.”

Tensions on the Korean Peninsula are now back to the worrisome levels of 2017, when the new Trump administration adopted an extremely confrontational stance toward North Korea.  There was a widespread sense of relief throughout East Asia and beyond the following year when Washington pursued a more conciliatory course, and President Trump and Kim Jong-un held their first summit meeting.  But hopes for a rapprochement between Washington and Pyongyang faded steadily over the next two years and are now clearly moribund.  Kim’s government recently emphasized that it no longer has any interest in continuing to negotiate with the United States. Thus, both the U.S.-North Korean dialogue and inter-Korean cooperation have collapsed simultaneously. That development does not bode well for peace prospects on the Peninsula.

The resurgence of dangerous tensions in Korea should cause U.S. leaders to reassess America’s policy in that part of the world.  Washington has a treaty obligation to defend the ROK, and if the current crisis explodes into armed conflict, the United States would have little choice but to honor that commitment. However, the conditions that led to the signing of that treaty have little relevance to today’s world, and continuing the obligation does not pass a sensible risk-benefit calculation for America.

Washington approved the security commitment to South Korea in the immediate aftermath of the horribly destructive Korean War. The global strategic environment was starkly bipolar, with the United States and the Soviet Union being the only powers that truly mattered. U.S. leaders saw both China and North Korea as Soviet clients and interpreted the DPRK’s 1950 invasion of the South as the first move in a Soviet-orchestrated offensive to dominate East Asia. As a weak, impoverished state, the ROK was in no position to defend itself during or after that war.

Today’s strategic environment is vastly different in numerous ways. The world has multiple economic and even military power centers instead of being bipolar. South Korea is one of Asia’s economic tigers and has enormous advantages over the North. The ROK’s population is twice that of the DPRK and its more technologically sophisticated economy is some 40 times greater. A country with those characteristics has the ability to create whatever defense force it wants or needs (including building a nuclear arsenal, if it chooses) to deter or defeat its adversary.

Retaining a country that is fully capable of defending itself as a U.S. security client makes little sense from the standpoint of genuine American interests. An armed conflict between the two Koreas, as tragic as that would be, would not constitute the opening move in a communist offensive to dominate East Asia, as it might during the Cold War. It would be an unfortunate but parochial struggle between two small Northeast Asian states.

Yet the possible adverse consequences to the United States of becoming entangled in such a war are substantially greater than they were during the Cold War.  North Korea did not possess nuclear weapons at that time, much less missile delivery systems capable of reaching the U.S. homeland.  Today, Pyongyang already is a nuclear-weapons state, and it is fast acquiring long-range missiles.

The current spike in inter-Korean tensions is an example of a quarrel that could embroil the United States in an armed conflict that would have little to do with issues crucial to America. It’s time for Washington to begin disengaging from its increasingly obsolete commitment to the ROK’s defense. Hopefully, the latest inter-Korean crisis will subside without warfare breaking out. But history shows that crises on the Korean Peninsula are like buses; even when one passes, another will be along relatively soon. U.S. leaders should commence the process of disengagement now, not years from now when an even more dangerous situation is taking place.