Why the Chances for Future Korean Peace Are Low 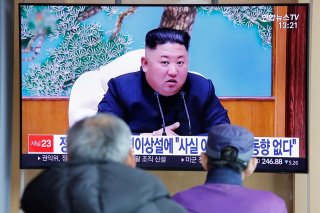 On June 25th, 1950, the peace across the Korean Peninsula was shattered by North Korean forces invading South Korea. Seventy years later, the Korean peninsula is once again facing growing tensions as North Korea threatens to take “measures to make the army advance again into the zones that had been demilitarized under the north-south agreement, turn the front line into a fortress and further heighten the military vigilance against the south.”

This is the latest step in a consistent pattern by Pyongyang to increase tensions. Kim’s increasingly powerful sister, Kim Yo-jong, has issued a military threat as a result of a leaflet-dropping campaign from defectors in the South, stating that “…before long, a tragic scene of the useless north-south joint liaison office completely collapsed will be seen.” In fact, North Korea demolished that building not too long later. Duyeon Kim argues that the latest phase in these tensions are manufactured by Pyongyang to pressure Seoul into further accommodating North Korea’s demands, in particular, to ease sanctions, and to split with the United States. It is likely that North Korea will continue to undertake provocations below a level that would justify a U.S. military response. Any actions by Pyongyang will be limited in scope and intensity and designed to drive a wedge between Seoul and Washington, D.C.

Certainly, there seems little prospect for a return to U.S.-North Korean summit diplomacy in 2020, with Foreign Minister Ri Son Gwon ruling out further meetings with President Trump. Kim Jong-un has stated that the priority now is to “mass produce” nuclear and missile capability. That could imply further testing of long-range missile systems. Resorting to new tests—either of long-range missiles or worse, a nuclear test, would violate the Trump Administration’s red line, and likely force a tough response from the United States. It would certainly sink any chance to restore the inter-Korean dialogue. Instead we’d be back to the dangerous days of “fire and fury” in 2017.

So, in 2020, all the indicators are flashing red, and events are heading in the wrong direction. Getting the process back on track will be challenging.

Is there a chance to end the Korean war by 2025—the 75th anniversary of the outbreak of conflict? It really will depend on the ability of key individuals to change course and engage in dialogue in a manner that leads to practical outcomes. But there are more uncertainties about which key actors will guide such a dialogue. In April, there were concerns that Kim Jong-un had disappeared and had, in fact, died. He is clearly still alive but is in poor health. Does Kim Jong-un survive and how stable is his leadership if his health is uncertain? If he dies, does power pass to his sister, Kim Yo-jong? Is she more amenable to dialogue or is she more dangerous than even Kim? Can she hold on to power, or is she and the Kim family Paekdu bloodline, ultimately challenged by opposing forces inside North Korea?

Turning to the United States, does a prospective Biden Administration adopt a more nuanced approach to future dialogue with Pyongyang? Or is the likelihood that the regime in North Korea would demand major concessions up front—an end to sanctions, a peace treaty, a withdrawal of U.S. nuclear capable forces on and around the peninsula—make such a dialogue impossible? Would another term of office for President Trump increase, or weaken, the chance for dialogue in a manner that contributes to a verifiable denuclearization of North Korea?

The future in relation to the outcome of seventy years of Korean War remains unknowable. Yet given current events and indications, the prospect of peace by 2025 doesn’t seem high. What is more likely is that the current tensions will continue—or even intensify, especially as North Korea looks set to return to provocations against the South and could undertake additional testing of long-range missile and nuclear capabilities.

Dr. Malcolm Davis joined ASPI as a Senior Analyst in Defence Strategy and Capability in January 2016.