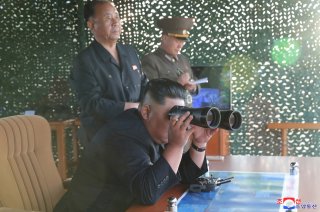 COVID-19 is continuing to create political, security, and economic challenges for countries all around the world. But these unexpected external shocks pose the greatest threat to autocratic regimes. For this reason, North Korea is attempting to project an image of strength through insisting that there are zero coronavirus cases within the country’s borders, announcing plans to go ahead with its Supreme People’s Assembly in early April, and conducting multiple short-range ballistic missile tests. However, experts suspect North Korea may be concealing a COVID-19 outbreak given an unexplained temporary halt in military activity.

It goes without saying that North Korea’s weak public health system is ill-equipped to deal with an outbreak that could create instability in the country. Admittedly, pundits have been predicting the collapse of the North Korean regime for decades — and there are no indications that recent developments threaten Kim Jong-un’s rule. But, as my recent study of 31 hereditary autocratic regimes reveals, family dictatorships like that in North Korea tend to experience rapid, unanticipated collapse.

Even if COVID-19 leads to internal instability in North Korea, that won’t be enough to truly threaten the regime. In my Survival article, I demonstrate that public discontents are usually not enough to herald in a new regime; the support of the military is critical for the durability of family dictatorships — and its withdrawal often marks the end of the regime. And one of the reasons the Kim regime has managed to stay in power through three different leaders is that it has made a number of policy decisions to ensure that the military will not challenge it. For example, Kim Jong-il’s focus on building nuclear weapons, as part of his revival of the ‘military first’ strategy, likely made him popular among military elites.

In an attempt to consolidate his position with the armed forces, particularly if it is true that COVID-19 led to a short-term freezing of military activity in North Korea, Kim may change his approach and push more frequent or advanced missile or nuclear testing. As the United States refocuses its security resources on dealing with the spread of COVID-19 at home, an uptick in tensions on the peninsula could create a real dilemma for Washington.

This article by Oriana Skylar Mastro first appeared at the American Enterprise Institute.