Why Donald Trump’s North Korea Policy Is in Limbo 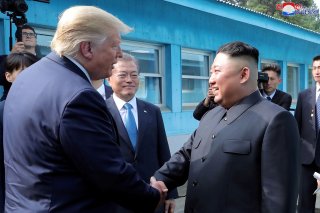 The only notable difference is that legacy now becomes more of a salient factor for Trump in the second term. As handling the North Korea issue is one of the most promising areas in which Trump can easily set himself apart from his predecessors, particularly former President Barack Obama, he will not squander such an opportunity. In last July, he stated confidently in an interview that “if Democrats had gotten in, we would right now be in a war.” Therefore, although many continue to be quite pessimistic about the prospect of another Trump-Kim summit after witnessing the failure of the Hanoi summit back in early 2019, Trump most likely will push for his third summit with Kim in the second term.

If holding another summit with Chairman Kim is a matter of when—rather than a matter of if—for Trump in his second term, then when will it take place exactly? To some degree, it depends on Pyongyang’s willingness, but Trump will try to make it happen when he needs it the most. For example, his third summit with Kim may be useful for diverting the American public’s attention away from some of the domestic problems. Moreover, Trump could simply hold it at a time when he can get the most credit for doing so, perhaps through maximum media attention; we know that he loves the media frenzy.

Until that time comes around, Trump has to maintain at least a decent relationship with North Korea’s leader. Similar to his first term, he will thus actively engage in personal diplomacy with Kim. Of course, flattering letters will move back and forth between the two leaders whenever necessary and at the same time, Trump will continue to look the other way as long as North Korea only shoots off short-range missiles.

Yu Bin Kim is a Ph.D. student in Political Science at the University of Missouri (MU). He is also a 2020–21 Graduate Fellow at the MU Institute for Korean Studies (MU-IKS). His interests are both interstate and intrastate conflicts. Follow him on Twitter at @Yubs89.