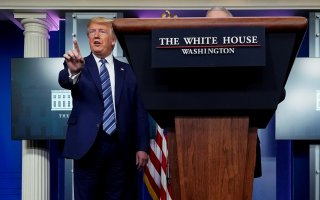 The relationship between President Donald Trump and Supreme Leader Kim Jong-un which began with such promise seems likely to fade away. The negotiations are stalemated, with neither side prepared to move. And the Trump administration still doesn’t understand what motivates Kim.

The problem is not just the lack of conversation. Kim has retreated from his more positive approach of 2018. He made the extraordinary announcement to his people that the regime had completed North Korea’s deterrent and planned to emphasize economic development. That was intended to appeal to Pyongyang elites who had grown to enjoy some of the finer things in life. The capital was much brighter and livelier, with more consumer goods, when I visited in 2017 than on my earlier trip years before. He was seeking to strengthen the regime’s popular support with an economic appeal.

However, after the summit failure in Hanoi and subsequent diplomatic deadlock he indicated what appeared to be a return to the old Byungjin line, or parallel development of the military and economy. This past New Year’s Eve he warned of tougher times and spoke of unveiling a new strategic weapon. Presumably, Kim still wants to improve the economy, but he, like his father and grandfather, put security first.

Kim understands the administration’s position, which is why he warned his people of hardship to come when he rejected advance denuclearization. For Kim, security, in the form of regime preservation, tops economics.

Indeed, if he was inclined to follow O’Brien’s advice he could have avoided steadily tougher sanctions from the start after he took power in late 2011 by not developing and testing missiles and nukes. And the same for his father. Both of them counted the cost and decided to proceed.

And who can blame them for doing so? It is a malign regime, to be sure, but it also responds rationally to threats and incentives. The kingdom of Korea long was called a shrimp among whales, surrounded by warring empires—China, Japan, and Russia—all of which wanted to dominate the peninsula. Japan won that battle in 1890, defeating China and turning Korea into a colony. However, Pyongyang has no desire to be ordered about even by supposed friends Beijing and Moscow.

Worse, North Korea is, even more, a shrimp today, worried about South Korea and the U.S. as well. Washington is distant, which is good from the standpoint of thwarting imperial control. But America also is moralistic and aggressive and at heart a social engineer. Thus, Washington policymakers can be counted on to take out hostile or obstreperous regimes with some regularity. Since the North’s large but decrepit conventional force could not withstand an American attack, possessing a modest number of deliverable nukes offers the only sure deterrent to attempted decapitation and regime change.

Moreover, U.S. behavior has not inspired trust in Washington’s word. President George W. Bush, along with the Europeans, made a deal with Libya’s Muammar Khadafy, who abandoned his missile and nuclear programs. He was feted around Europe until some of his people rose up in revolt. Then the U.S. and European governments took full advantage of his moment of weakness to engineer his ouster. He died in a spectacularly ugly public murder.

After the execution of Nicolae and Elena Ceausescu on Christmas Day, 1989, Kim Jong-il reportedly circulated a video of their end to his top officials to stiffen their resistance to change in North Korea. One can imagine Kim Jong-un using the recording of Khadafy’s fate in a similar way. The Trump administration might promise the regime beach resorts and corporate headquarters if only it disarms. But who does Kim sue for relief if American bombers later arrive overhead?

Add to that Trump’s repudiation of the Iranian nuclear deal and demand for a renegotiation, based on conditions that amount to Tehran’s surrender of its independent foreign policy. Even if Kim came to terms with Trump, what would stop a successor from deciding to unilaterally change the deal?

Washington should acknowledge that denuclearization is a fantasy. Back when the Clinton administration negotiated the Agreed Framework it might have been possible to convince the North to forego the nuclear option by offering the right mix of security guarantees, economic benefits, and mixed penalties.

However, today the DPRK is an existing, not a prospective, nuclear power. The U.S. has repeatedly demonstrated that it is not a trustworthy partner. Threats of war only reinforce the North’s reasons to develop a sizeable arsenal capable of hitting America. Kim is a rational dictator who desires to retain power. Ergo, Pyongyang will not denuclearize. And certainly not do so because U.S. officials try to dazzle him with prospective development plans if he turns over his future to Washington.

There is still much that could be advanced with negotiations. Creating a communication channel, reducing opportunities for mistake and misjudgment, reducing military tensions, limiting the North’s nuclear ambitions, improving inter-Korean relations, and more. However, they require entering talks with open eyes and realistic expectations. Neither of which currently characterizes the Trump administration.