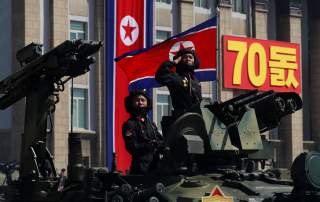 North Korea’s leaders are used to “muddling through.” For decades, it’s how they have ensured their domestic survival: never pursuing the bold reforms that would be required to put their country on a path toward international acceptance and economic prosperity, but always doing just enough to avert the regime’s collapse. Pyongyang’s nuclear weapons program is the epitome of this approach, an ambition that prevents North Korea from becoming a “normal” member of the international community while also providing the best available guarantee against armed attack.

In a way, U.S. policy toward North Korea has also been a case study in muddling through. For despite the periodic suggestion that a military strike against Pyongyang would bring its nuclear program to a swift end, those in power have always (rightly) rejected such proposals as being far too costly. Neither have U.S. leaders been willing to enter into a peace agreement with North Korea that accepts its status as a nuclear weapons state.

The result has been a residual approach characterized by a tacit acceptance that the United States ought to focus on mitigating the risks posed by an abjectly recalcitrant North Korea. In one form or another, this was the de facto policy of the Clinton, Bush, and Obama administrations. To be sure, the United States has waged some purposive policies meant to nudge Pyongyang in the direction of denuclearization—the Agreed Framework and Perry Process in the 1990s and the Six-Party Talks in the 2000s, for example—but, in the end, every such effort has been left by the wayside.

The Singapore and Hanoi summits between President Trump and Kim Jong-un offered the best hope in a generation that the United States might break with muddling through. Finally, it seemed, a bona fide “peace process” was in the making. But there was a fundamental problem with Trump’s diplomatic overtures that even the histrionics of summitry could not conceal forever. Namely, Trump has been making the same core demand of Pyongyang—that is, comprehensive, verifiable nuclear disarmament—that past presidents have articulated, and which has always made a lasting agreement between the two sides impossible to achieve.

In his New Year’s address, Chairman Kim reiterated this basic political reality that North Korea has little interest in giving up its nuclear deterrent. Not only did Kim announce that Pyongyang no longer considered itself bound by its previous undertaking to stop testing nuclear weapons, but he went on to declare that a “new strategic weapon” would soon be debuted. In short, Kim rejected both the letter and the spirit of the tentative agreements so far reached between himself and President Trump.

Now the Trump administration must respond to Kim’s message in a way that acknowledges the cold fact that North Korea is unwilling to exchange its nuclear weapons for what the United States had placed on offer. It will not be an easy task.

Like his predecessors, Trump is unlikely to drop the demand that Pyongyang submit to total denuclearization. While watering down the U.S. negotiating position would rescue the peace process in the short term, it would invite such severe criticism from domestic and international audiences that diplomatic engagement would become untenable in the long term. Nor is Trump likely to return to a policy of military coercion—at least, not unless he has the stomach for managing simultaneous military crises in the Persian Gulf and Northeast Asia.

The only remaining alternative is for the United States to go back to muddling through—that is, retaining the formal pretense that North Korea must denuclearize but, in practice, converting US policy into an exercise in damage limitation. Trump will find it harder than past presidents to resume this tack, not only because he has spent the past few years insisting (contrary to expert opinion) that the North Korean nuclear issue can easily be resolved, but also because his administration has utterly laid waste to the critical US relationship with China.

In the end, however, Trump might not have much of a choice. If denuclearization is unattainable and military options are as unpalatable as ever, muddling through will be all that remains—just as it always has.