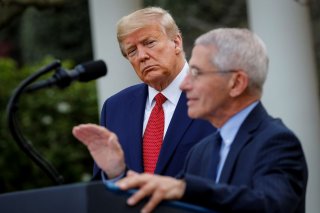 The threat of the Corona virus has changed the global security environment. A conflict qualifies as a war by standard statistics of violence if it produces at least 1000 battle deaths per year. Since March 27, Covid-19 has produced more than three times that number, every single day. By the time this article is published, Covid-19 will likely have killed more Americans than the terrorist attacks on September 11, 2001. Globally the Corona virus has already killed as many people as all conflicts in the world killed during an average year of the first decade of the twenty-first-century.

A comparison between the magnitude of the threat of war and a virus may be artificial. However, there is evidence about what effect focusing on a pandemic has on the likelihood of wars. Some commentators refer to the letter by President Trump to North Korea’s leader Kim Jong-un, offering cooperation to help fight the pandemic, while others point to the possibility that North Korea uses the distraction this global pandemic offers, to engage in further tests and developments of its nuclear capacity. Will the coronavirus pandemic increase or reduce the likelihood of a war?

An extensive dataset in the research data depository of the University of Bath in the United Kingdom, provides evidence on how different U.S. approaches and presidential discourses precede U.S. military engagements and increase the chances of conflict fatalities in such operations. When the U.S. president speaks about protecting Americans or others, he is more often than not referring to methods of protection that aim at changing someone else’s behaviour by means of power. The United Nations Security Council discourse emphasises power in the same way, but only in less than one fifth of the time it deals with protection of people. Clearly, the focus on hard power is as American as an apple pie. This is, perhaps, unsurprising given the position of the United States as the world’s most powerful nation.

However, if we link the data on U.S. Presidential Papers with Uppsala University’s conflict data, we can see that the more U.S. presidents focus on changing the behaviour of others, the more they authorise war fighting and the more these wars produce fatalities. This seems to be the case both if we look at a time series or the countries a given U.S. president talks about. For example, whenever and wherever a U.S. president talks about protection by changing some else’s behavior, there will be a war and battle deaths.

Conversely, when the focus is on protection that prevents health crises, environmental degradation or economic underdevelopment, the framing is cooperative and there will be less wars and conflict fatalities. This has been proven by a study on modern humanitarian interventions. Whenever, U.S. presidents have focused on the protection of the environment, for example, they have been much less willing to engage in destructive wars, and whenever the focus in protection has been related to fixing domestic problems that threaten the wellbeing of Americans, such as domestic crime, less Americans have died in far-away wars.

Thus, Trump’s letter to North Korea is in line with the general pattern: in the midst of the coronavirus attack, America is more likely to be able to cooperate with other countries, and less likely to have to fight wars. This is not simply because of the fact that the United States is faced with a greater danger than foreign conflicts. It is also not due to the fact that U.S. resources are taken up by the domestic problem of fighting the pandemic. The fact that the world focuses on a threat that is caused by a virus rather than a dictator, a terrorist or a global criminal, changes—at least temporarily—the diagnosis and prescription in world politics. In other words, U.S. security is not in this instance threatened by bad guys that need to be stopped. American government can also protect its people by cooperating with others, learning from the experiences of allies, and working hard without focusing on how U.S. power could change the behaviour of other countries.

When America has worked within this framing of the world—protecting the environment or helping poor countries like North Korea in their efforts to save lives—less people, including Americans, have died in conflicts. Thus, the fact that the world is now focused on a common, unintentional threat, the coronavirus, could be good for peace on the Korean peninsula and in the world. While it is unlikely that there will be formal peace treaties, let alone a global ceasefire as the UN Secretary General is calling for, there will still be a reduced threat of war due to the new framing of world politics that the virus has imposed on us.

Timo Kivimäki is a professor at the University of Bath.