Why Iran's Provocations Require Working With Japan and South Korea 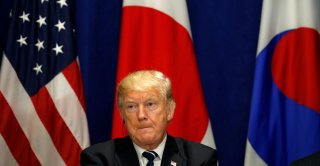 As the COVID-19 outbreak dominates global news cycles, U.S.-Iran tensions are also heating up. While some of this is on display in the COVID-19 sphere, it’s also taking place in the military one: on April 15, U.S. Forces Central Command accused eleven Islamic Revolutionary Guard Corps vessels of harassing six U.S. warships in the North Arabian Gulf. This is the latest in a line of retaliatory measures that the United States and Iran have been taking towards one another since the beginning of the year. As the administration convenes with partners and considers how to respond to this round of Iranian provocations, it cannot forget to coordinate with its allies in Northeast Asia: Japan and South Korea.

Despite the seeming distance, U.S. military engagement in the Middle East and Southwest Asia has been a historic source of friction between the United States and these strategically critical allies. Japan’s ability to maintain and deploy a military is famously restricted by Article 9 of its constitution. Over the past thirty years, U.S. involvement in the Middle East has repeatedly triggered debate around this constitutional provision, as it raises questions over Japan’s responsibility to back U.S. military actions per the two countries’ defense alliance. This often leaves Japanese policymakers who prioritize a strong working relationship with the United States at odds with the pacifist-leaning Japanese public.

These tensions were on full display after the Gulf War—the Japanese government, which had been constitutionally bound from sending troops to region, controversially legalized the participation of the Japanese Self-Defense Forces in certain U.N.-authorized peacekeeping missions. A 2004 deployment to non-combat zones in Iraq similarly raised concerns surrounding constitutionality amidst public backlash. Additionally, South Korea has not been immune from stresses stemming from U.S. military engagement in the region. It deployed the so-called “Zaytun Division” to Iraq in 2004 and at one point in time had the third-largest foreign military contingent in the country. However, this force was removed in 2008 after an outcry of public opinion.

In recent years, Japan and South Korea have found themselves caught in the middle as tensions between the United States and Iran escalate. Both countries rely on fossil fuel imports to meet their energy needs, and the majority of crude oil imports in both countries comes from the Middle East. Japan and South Korea, understandably, see stability in the Middle East as critical for their energy security. While both countries complied with pre-Joint Comprehensive Plan of Action (JCPOA) sanctions, Iran has typically held a large share of these imports. In recent years, South Korea had been the world’s largest buyer of Iranian condensate. Iran alone accounted for approximately 20 percent of Japan’s oil imports before the JCPOA’s enactment, and even while complying with sanctions Iran still accounted for around 4 percent of Japanese imports.

In light of these conditions, the administration should take these allies’ interests into deeper account while improving its coordination with them in regards to Iran. To accomplish this, the Defense Department should work to break down silos between CENTCOM and INDOPACOM to facilitate communication between Middle East and Asian subject matter experts. Despite being placed in different Geographical Combatant Commands, analysts and operational planners must account for our INDOPACOM allies’ strategic needs in the CENTCOM Area of Responsibility and coordinate accordingly.

The United States should also consider creating formal, permanent desks for INDOPACOM-focused liaison officers from Japan and South Korea at operational headquarters throughout the Area of Operations. After all ,these liaison desks already exist for partners in Europe and the Middle East. While Japanese and South Korean liaisons have been present on a static basis in the past, their missions were typically focused on tactical level, in-theater concerns.

CENTCOM planners have greatly benefited from the expertise and perspective from NATO, Middle Eastern, and other out-of-theater liaisons when planning complex, multinational operations like those to counter the Islamic State of Iraq and ash-Sham (ISIS). Expanding this liaison network to include Japan and South Korea would simultaneously factor in the strategic needs of two critical allies, as well as add a fresh perspective from two capable military partners to American planning. U.S. actions regarding Iran have far-reaching consequences, and the United States should not take Japan and South Korea for granted as it pursues its Iran policy.