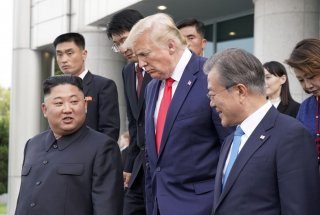 Ending the Korea War by 2025 is a remote and unlikely possibility, but it is not unimaginable. One fundamental challenge to resolving any international conflict is that the internal politics must be right for each party to come to the table before any external deal can be made. This is particularly challenging on the Korea Peninsula, since ending the war requires this alignment among three parties, the United States, North Korea, and South Korea.

The Democratic Republic of North Korea may be an authoritarian regime, but it is not immune to political realities. National defense is the first order priority for any government, so North Korea had little ability to deviate from its intense pursuit of nuclear weapons as long as the United States maintained its regime change policy toward the “Axis of Evil.” By 2009, Kim Jong-il had begun to establish Kim Jong-un as his heir, and this succession process added and additional barrier to North Korea’s ability to negotiate. Kim Jong-un’s own efforts to consolidate power in Pyongyang constrained his ability to freely negotiate with the United States and South Korea until the Seventh Congress of the Korean Workers’ Party in 2016, which, of course, followed considerable progress in the country’s nuclear program.

While Pyongyang has not had the political inclination to negotiate, over the past two decades, the same can be said about Washington. After jump-starting North Korea’s nuclear program by committing itself to regime change, the Bush administration made no serious effort to engage North Korea. Rather, it used the foil of the Six-Party Talks to avoid direct interaction with Pyongyang, which was of course, unpalatable to North Korea’s leadership. The efforts of the Obama administration’s Leap Day Accord were doomed by Kim Jong-un’s imperative to advance the nuclear aspect of his byongjin policy in order to consolidate his rule. After that, there was little interest in pursuing any policy except strategic patience.

Thus, the Trump administration received the first opportunity to negotiate with North Korea in two decades. But, as is now clear, these efforts were not serious. The Singapore Summit offered a high-level road map with no plan for working-level follow up. The administration neglected to consider realistic economic incentives for North Korea while adhering to a failing maximum pressure policy. It pursed not a top-down diplomatic process, but a top-only approach where Trump exchanged “Love Letters,” but did not actually depart from the policy of strategic patience. The weakness of this approach was clearly exposed by the collapse of the process in Hanoi, which closed the most recent window of opportunity.

Recent South Korean administrations have been open to reunification (and likewise ending the Korean War), with varying levels of tolerance for what concessions to make and when. Thus, an end to the war could be on the table for both Moon Jae-in and the next incumbent of the Blue House. Yet, Syngman Rhee famously scuttled armistice efforts in 1953, fearing that the United States would make a deal that undermined the Republic of Korea’s ability to reunite the peninsula on its terms. It is unthinkable that South Korea would accept a U.S.-North Korea deal that did not address its fundamental interests—and it is hopeful that the United States would not pursue one, although in a continued “America First” era, one cannot discount the possibility.

To make progress, the United States will have to make concessions that are meaningful to Pyongyang. This prospect is complicated by imminent 2020 elections. In one scenario, a second Trump administration will have to abandon its maximum pressure policy and begin to offer economic incentives to change North Korean behavior. In another scenario, a Biden administration will have to shed its outdated thinking on North Korea and do the same.

Yet, either administration will likely face a North Korean provocation campaign designed to escalate to deescalate before any negotiations—think 2017-redux. Will Pyongyang be able to successfully ratchet up tensions without making it inordinately difficult for the United States to return to the table? Will North Korea have a domestic situation that is stable enough to allow Kim Jong-un to come back to the table himself? Will Kim Jong-un’s health hold out long enough that North Korea can avoid another succession before 2025?

And we haven’t even considered China’s stakes in resolving this issue.

With so many variables in play, it is difficult to be optimistic about ending the Korean War to an end by 2025, but it is not impossible. It will rely on all parties making concessions, and the biggest question is if they will be willing to do so.

Chris Steinitz is Director of the North Korea Program at CNA, a nonprofit research and analysis organization located in Arlington, VA.