Why It Takes Both Koreas, America, and China for There to Be Peace in Korea 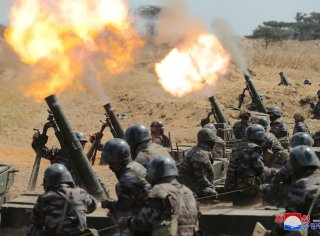 The Korean War has never officially ended. The so-called “Forgotten War” was only temporarily halted by the armistice agreement signed on July 27, 1953, between the United States, China, and North Korea (the DPRK). It was never followed by a peace treaty, and thus the two Koreas are technically still at war. Despite the on-and-off escalation of military tensions on the Korean Peninsula, Seoul and Pyongyang have fortunately avoided initiating or being dragged down into another large-scale military conflict up to this point. However, it does not mean that the Korean people currently live in peace. The unresolved war constantly poses a potential threat to the security and well-being of ordinary people on the peninsula, restraining their ability and intention to go beyond the Cold War that still defines the geopolitics of their region.

On the way to the Hanoi Summit in February 2019, there were expectations that progress in the U.S.-DPRK nuclear negotiations might lead to an end-of-war or peace declaration. However, the abrupt end to the summit without any achievement, followed by a worsening of the situation, has frustrated anyone who aspires to establish a permanent peace regime on the Korean Peninsula and has made any optimistic future unlikely to be realized for the time being. The 70th anniversary of the Korean War this year is further tainted by the growing aggression from Pyongyang lately, reinforcing the reality that the two Koreas are still divided and hostile to each other.

Historians, including myself, are usually careful with making conjectures about the future. Nevertheless, we can still, based on our past experiences, think about the conditions or premises which would contribute to making a crucial breakthrough for the end of the Korean War within five years. What I would focus on are the major players’ aligned interests on this issue as one of the key conditions. All the major parties involved in the war should share the same understanding that the Korean War should be formally terminated by a legitimate legal or political process to which they are ready to fully commit themselves. Historically, however, the Korean Peninsula was not fortunate enough to gather all the necessary support simultaneously from the four main parties—the United States, China, and the two Koreas—at several critical junctures in history.

For instance, the step-by-step normalization of relations between Washington and Pyongyang was considered during the Bill Clinton administration with its diplomatic efforts such as the “Agreed Framework” and “Perry Process” to curb North Korea’s nuclear and missile development programs. Yet, the Clinton administration failed to reach an additional agreement with North Korea before George W. Bush took office in 2001. Clinton’s North Korea policy based on dialogue and diplomacy was then quickly overturned by the Bush administration’s antagonistic attitudes toward North Korea, which was even proclaimed part of an “axis of evil” by Bush in early 2002. With such neoconservatives as Dick Cheney, Donald Rumsfeld, and John Bolton in key positions, the Bush administration was not willing to talk and find a diplomatic solution with North Korea. However, the two consecutive, progressive administrations of South Korea which overlapped with the Bush years still pursued inter-Korean dialogue.

Another example is the “strategic patience” policy of the Barrack Obama administration, which failed to prevent North Korea from becoming a de facto nuclear state. Obama’s two terms overlapped with two conservative presidents in South Korea, who were much less eager to initiate diplomatic efforts with Pyongyang than their progressive predecessors. Other issues aside, the absence of South Korea in the role of an intermediary or co-player in bringing Pyongyang to the negotiation table during this period appears to have partly limited potential diplomatic space for the Obama administration to implement its North Korea policy.

Currently, the two Koreas would be the most willing parties to formally end the Korean War and move forward. The 2018 Panmunjom Declaration clearly states that “[b]ringing an end to the current unnatural state of armistice and establishing a firm peace regime on the Korean peninsula is a historic mission that must not be delayed any further.” However, South Korea’s actions are limited as a result of it not having been party to the armistice, although there still exists room for Seoul to mediate between the others who were. China has, thus far, not revealed any obvious opposition on this matter. There is an uncertain possibility that growing rivalry and competition between Washington and Beijing might affect the latter’s position on the future of Korea at a later point, but, at this moment, there is no sign of China becoming an obstacle in any negotiations to end the Korean War.

Thus, it becomes clear that the United States holds the key to resolving this almost seventy-year-old problem on the Korean Peninsula. Yet U.S.-DPRK nuclear negotiations have been in a stalemate since the Hanoi Summit, and, without any progress in the denuclearization of North Korea, a breakthrough in the formal ending of the war cannot be expected for the near future either. In this sense, the November presidential election in the United States is important even though neither a power transition to the Democrats nor a Trump reelection guarantees a change in U.S. policy towards North Korea.

The next American and South Korean presidents are going to commemorate the 75th anniversary of the Korean War in 2025. Assuming that the current Chinese and North Korean leadership stays in power, who wins the elections in the United States (November 2020) and South Korea (March 2022) and how the U.S.-DPRK nuclear negotiations evolve or deteriorate over the next five years could be decisive for this significant but neglected issue of ending the Korean War.