Why the Korean War Armistice and U.S. Alliance Is Here to Stay 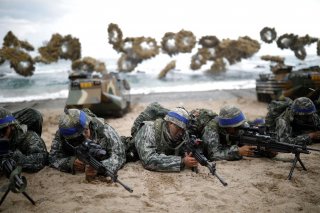 On the eve of this year’s commemoration of the onset of the Korean War, Pyongyang bluntly reminded us that Korea’s civil war—a war North Korea doesn’t intend to lose—is far from over. North Korea’s dramatic destruction of the Inter-Korean Joint Liaison Office in Kaesong and its promise to take military steps against the South also highlighted the stark contrast between Seoul’s idealistic vision of reconciliation and Pyongyang’s cold-blooded pursuit of a zero-sum competition with the South. Seventy-five years after its tragic division, the Korean Peninsula remains a dangerous place, and all signs suggest a period of rising danger is ahead.

North Korea’s destruction of a symbol of South-North cooperation signaled its preparedness to dismantle the entire foundation of relations with Seoul. Pyongyang has already cut communication links and military hotlines to the South, and it is now on the verge of ending the Comprehensive Military Agreement concluded on September 19, 2018, between the two Koreas to reduce border tensions. Pyongyang is even planning to redeploy troops and resume military exercises along the DMZ, rebuild DMZ guard posts, and reinforce artillery units capable of targeting South Korea. With virtually every North-South connection now suspended or in danger of termination, the Moon administration’s vision of reconciliation with Pyongyang has gone up in the smoke of the explosion at Kaesong. The two Koreas now seem headed for a dark, confrontational period in their relations.

Pyongyang’s anger at Seoul has been rising since the collapse of the Trump-Kim Jong-un summit in Hanoi. North Korea has resented Seoul’s failure to convince Washington to accept the North’s offer of closing some of its nuclear facilities in exchange for easing of sanctions. More broadly, Pyongyang has long been frustrated that engagement with Seoul has not yielded tangible benefits. Faced with the pressure of sanctions and an economic downturn caused by the coronavirus pandemic, Pyongyang’s new strategy is to threaten the end of all contact and cooperation unless South Korea offers major concessions. Even if Seoul were inclined to yield to this blackmail, the restraints imposed by international sanctions and the need to avoid alienating its U.S. ally would likely prevent it from satisfying Pyongyang’s demands. But Seoul’s latest rhetoric suggests it is not inclined to play North Korea’s game.

As tensions simmer, we cannot rule out the possibility that North Korea may carry out a military provocation, both to test Seoul’s mettle and to underscore its point that the era of cooperation between North and South has ended. Should that happen, South Korea will be compelled to respond. As tensions escalate, progress on the nuclear issue is unlikely. Indeed, Pyongyang is more wedded to its nuclear weapons now than ever.

Both Washington and Seoul have sought to make progress on the nuclear issue by indicating a willingness to replace the Korean War Armistice Agreement with a permanent peace treaty, but this idea has not gained any traction in Pyongyang. Instead, Pyongyang is focused on its demand that Washington remove their own “threat,” which North Korean diplomats define as the U.S.-South Korea alliance, the presence of American troops in Korea, the U.S. nuclear umbrella over South Korea, and those tactical and strategic weapons the U.S. could bring to bear in a conflict with North Korea. Even for the current U.S. president, a vocal alliance skeptic, accepting Pyongyang’s demand and leaving America’s South Korean ally to face a nuclear-armed North Korea on their own seems highly unlikely.

The upshot of the current crisis is that five years from now, when we commemorate the 75th anniversary of the beginning of the Korean War, both the armistice and the alliance—which have long kept the peace on the Korean Peninsula—will still be with us. That is our good fortune, since they will be indispensable in restraining and deterring a nuclear-armed North Korea and in preventing another tragic Korean War.

Evans J.R. Revere is a former Acting Assistant Secretary and former Principal Deputy Assistant Secretary of State for East Asian and Pacific Affairs and served as deputy chief of the U.S. team in negotiations with North Korea. He is currently a Nonresident Senior Fellow at the Brookings Institution’s Center for East Asia Policy Studies and a Senior Advisor at Albright Stonebridge Group. He previously served as President and CEO of The Korea Society (TKS).