Why the Korean War Has Not Formally Ended 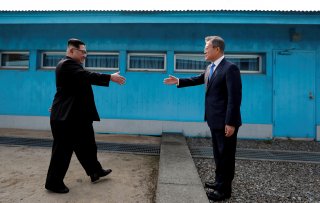 The U.S. withdrawal from Afghanistan has provoked a wave of concern that the United States might withdraw from other commitments, such as South Korea or Taiwan. This occasioned some debate on the still unresolved status of the Korean War. Hostilities only stopped under an armistice, not an actual peace treaty.

Dovish analysts in the Korea policy community have argued that a treaty would ameliorate the peninsular stand-off. Notionally, a final deal would make reconciliation easier, facilitate disarmament, reduce foreign intervention in Korean affairs, and so on. Yet such a deal never happens despite this idea floating around for decades.

This is why it has not happened:

First, Korea is not at “war” in the normal sense of the word. In fact, it has not been at war since 1953. So suggesting that a treaty will bring a state of peace is an empirical exaggeration, as that state already basically exists. It is a mischaracterization to refer to Korea as another “forever war.” That term connotes regular, kinetic exchange between two sides in an unwinnable quagmire with no obvious end-point. That is a good description of U.S. wars in Vietnam, Iraq, and Afghanistan, but not of the Korean Peninsula. The armistice has held since 1953, and provocations along the border have always come from North Korea, not from South Korea or the United States. The lack of paperwork—a formal peace treaty—has no bearing on the empirical situation on the ground which is obviously not open conflict.

Second, a peace treaty is irrelevant if the two Koreas do not change to become more like each other and thus more likely to get along normally post-treaty. If they stay as they are—a liberal democracy on the one hand and an Orwellian gangsterish autocracy on the other—a treaty will make no empirical difference as all the actual issues dividing the Koreas will remain. Since South Korea is not going to constitutionally become more like North Korea, then a narrowing of the gap means, in practice, the liberalization of North Korea. The case on the Korean Peninsula is likely similar to that of Germany. Recall that the division of Germany was wound down on paper only after the Soviet Union reformed. Specifically, if North Korea stays the Democratic People’s Republic of Korea that everyone has known for decades—with a million soldiers flush against the South’s border, gulags, a spiraling nuclear missile program, a quasi-theocratic leadership cult—then what would change post-treaty? Would South Korea and its allies suddenly trust North Korea more? Almost certainly not. Signing a treaty without any reform is a costless move for the North. So neither side would disarm; the inter-Korean arms race would continue; the United States and UN commitment to South Korea would still be needed; human rights would still be a big issue; and so on.

Third, doves frequently finger U.S. obduracy for the lack of movement toward a treaty, and it is true that the United States fears a treaty would undercut the legality of the UN Command in Korea as well as its own forces’ position. But there are other, more important reasons the United States and South Korea do not push hard for a treaty.

The implacable resistance of the South Korea Right. The Right is staunchly anti-communist and pro-Southern-led unification. The current dovish government has made no overture to them on this issue, which has led to conservative paranoia over the government’s intentions. The right would fight a treaty hard and seek to undo it as soon as conservatives re-took the South Korean presidency.

The South Korean median voter is cool to a treaty for fear it might push out the Americans. The U.S. alliance is very popular. Centrist and low information voters understand, however vaguely, that the U.S. presence backstops South Korea’s participation in the global economy, and that jeopardizing that arrangement for a deal with the deeply mendacious North is a huge risk. There is just not much enthusiasm for a treaty outside of the South Korean Left, which is perhaps 35-40 percent of the public. Hence this idea, which has been kicked around by the South Korean left for decades, never comes to fruition. It is also why President Moon Jae-in’s 2019 idea for an inter-Korean “peace economy” flopped too. If Moon and his leftist coalition really want this treaty, then he needs to use the bully pulpit of his presidency to convince centrist and conservative voters. He has never tried.

South Korea wants to avoid legal and constitutional confusion. Seoul did not sign the 1953 armistice, so it is legally unclear what its role would be in a treaty. But China did sign the armistice which would, presumably, give it a veto over the treaty’s shape. China has already bullied South Korea in recent years as part of its “wolf warrior diplomacy.” Treaty negotiations would invite Beijing further into peninsular affairs. Also, the South Korean constitution claims the sole right of governance over the whole peninsula for Seoul. A treaty would probably involve some kind of recognition of North Korea, which might well require amending the South’s constitution.

A treaty is all upside for North Korea with no obvious benefit for the South. It suggests the inter-Korean diplomatic normalization and the legitimization of North Korea as an equal, normal Korean state rather than the Orwellian gangster fiefdom and errant black hole of Korean history which it is. Also, it undercuts the legitimacy of UN and U.S. presence.

So why would the South do this? Again, outside of the small percentage of Left, there is almost no interest or enthusiasm for this project. And if Seoul gets nothing from the treaty, then it is easy to understand why.

In short, it is easy to predict there will be no treaty until North Korea is dramatically different.