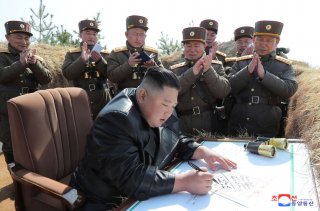 First, there is little chance that North Korea will give up its nuclear weapons program on its own or that denuclearization negotiations between the United States and North Korea will produce any meaningful results soon. In April 2012, North Korea revised the preamble of its constitution to clearly recognize itself as a nuclear power. Then in March 2013, a plenary meeting of the Party Central Committee was held to confirm the “byeongjin policy,” which pursues economic development and nuclear power simultaneously. North Korea’s policy of pushing for both nuclear weapons and economic development is fundamentally opposed to the position of South Korea and the United States that a peace regime presupposes the North’s denuclearization, signaling that Pyongyang has no intention to give up its valuable strategic arsenal.

Second, worsening U.S.-China strategic competition in the post-coronavirus era will make negotiations on North Korea’s denuclearization more difficult. This will, in turn, also make it difficult to realize a declaration to end the Korean War. A declaration is just a declaration, not a treaty or statute that is legally binding. Nonetheless, if a declaration of the end of the war is to lead to a meaningful peace regime, it should be approved by neighboring countries such as China, Japan, and Russia, as likewise for a declaration between the U.S. and North Korea. However, strategic competition between the United States and China after COVID-19 is expected to worsen, which would give them little incentive to cooperate on this issue.

Recently, North Korea blew up the inter-Korean liaison office in Kaesong, marking a sharp turn toward heightened hostilities between Seoul and Pyongyang. Pyongyang subsequently rejected a South Korean offer to send a special envoy for urgent talks and instead announced plans to remilitarize the DMZ, which had been disarmed following the 2018 inter-Korean Comprehensive Military Agreement. As a result, inter-Korean relations have regressed to the state things were before the June 15 Joint Declaration, which called for the two Koreas to work together to resolve the issue of national reunification. Given this, it seems quite difficult to expect a declaration of the end of the Korean War by 2025.