Why Is North Korea Testing a Long-Range Cruise Missile When It Has Plenty of Ballistic Ones? 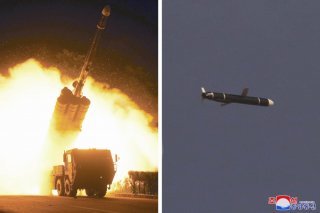 North Korean state media announced last weekend that Pyongyang had successfully test-fired its first long-range cruise missile late on the evening of September 11-12. Reportedly powered by a newly-developed turbofan engine, the weapon allegedly traversed 932 miles flying in a figure-eight pattern over the course of two hours and six minutes.

The image posted with the article shows a large missile leaping up from an eight-wheel truck with five launch tubes that appears to match one that debuted in a military parade on January 2021, though analysts at the time speculated it resembled an oversize rocket artillery system.

The missile is described as a “strategic weapon,” wording intended to convey it could serve as a delivery system for nuclear weapons. The reported range implies it could be used to attack U.S. bases across Japan, particularly those on the island of Okinawa, roughly 800 miles south of North Korea.

Experts disagree as to whether the recent test was a signal aimed at the United States over military exercises with South Korea this August, or to improve the morale of the North Korean public, or simply scheduled to avoid annoying China by creating a disturbance in the vicinity of the 2022 Winter Olympics in Beijing.

Curiously, a brief statement by the U.S. Pacific Command did not confirm that it was aware of the test prior to the North Korean announcement. That may mean it was not one hundred percent certain that the missile test took place, but may also imply a test may not have been detected by the current surveillance measures in place, particularly as the ascribed figure-eight pattern suggests the weapon did not leave North Korean airspace.

Still, that hints at the possible advantage a long-distance cruise missile could have compared to North Korea’s already existing arsenal of faster ballistic missiles.

Cruise missiles aren’t as fast and flashy (literally!) as ballistic missiles that arc high up into the atmosphere traveling many times the speed of sound. And North Korea already has a large arsenal of ballistic missiles, including some with the range to threaten the continental United States.

Indeed, while an intercontinental or intermediate-range ballistic missile can traverse thousands of miles in a matter of minutes, a typical subsonic land-attack cruise missile skims at low altitude at below the speed of sound at around 600 miles per hour, meaning they may take a few hours to reach targets not much further than 1,000 miles away.

However, existing U.S. missile defenses may be more challenged by a nuclear-armed cruise missile than if North Korea had built yet another even bigger and faster ballistic missile, like the so-called ‘monster missile’ tested earlier this year.

That’s because ballistic missiles are highly indiscrete. Their first-stage rocket boosters create a huge flash at launch that can be promptly detected by orbiting Satellite-Based Infrared Sensors (SBIRS), providing early warning and allowing other sensors to cue to the missile’s projected trajectory. And ballistic missiles do indeed fly high above the atmosphere in predictable arcs that make them visible to powerful long-range radars, making it easier to plot an intercept with an appropriately designed missile interceptor.

By contrast, a cruise missile’s boosters produce a smaller flash unlikely to be distinguished in a wartime context. And because cruise missiles fly at relatively low altitudes, the curvature of the earth means many surface-based radars simply won’t have a direct angle with which to detect a cruise missile until they are dangerously close.

Worse, cruise missiles tend to have a small radar cross-section,  especially from their frontal ‘head on’ aspect, decreasing the range at which they are detected. According to one study, the latest Block 4 Tomahawk may have a radar cross-section ranging from .05 to .001 square meters depending on the detection angle, roughly in the ballpark of an older F-117 Nighthawk stealth jet, though not as stealthy as an F-35 stealth fighter jet. A first-generation North Korean missile is unlikely to be as stealth-optimized, but should still pose a serious detection challenge.

Cruise missiles are also more maneuverable than ballistic missiles, allowing them to perform evasive maneuvers and navigate around areas where hostile radar coverage and air defenses are denser.

That’s not to say cruise missiles are impossible to detect and unstoppable. Ships and downward-looking airborne early warning planes and space-based sensors could allow detection and interception of low-flying missiles from further away. And because cruise missiles fly so much lower and slower than ballistic missiles, they can potentially be engaged by less specialized air defense systems and even fighter aircraft—if detected soon enough, at least.

Prior to the September 2021 test, North Korea developed two shorter-range anti-ship cruise missiles: the Kumgsong-1, a domestic extended-range variant of the old Soviet P-15 and Chinese Silkworm anti-ship missile, and debuting in 2014-2015, the Kumsong-3 (or KN-19), a lengthened derivative of the newer Russian Kh-35U anti-ship missile believed to have a range of 155 miles.

There was no lack of evidence that North Korea was working on more advanced types, as it conducted cruise missile tests in April and July 2020 and two more in March 2021. As non-nuclear cruise missiles are widely used as anti-ship weapons, those tests were not seen as especially provocative. In retrospect, it remains unclear if those represented further testing of the known Kumsong missiles, or preliminary tests of the land-attack missile that premiered this September.

To be fair, even if North Korea has developed a Tomahawk-like cruise missile that can traverse long distances, we don’t know whether it relies only on pre-programmed flight instructions and inertial navigation systems, or if it has the terrain-matching sensors and artificial intelligence to ensure it strikes targets with precision, which would be especially important if the missile is to be used in a non-nuclear role.

Sophisticated or not, land-attack cruise missiles fit in with North Korea’s general strategy of developing diverse nuclear weapon delivery systems such as missile-armed submarines and Intercontinental Ballistic Missiles (ICBMs) which release multiple nuclear warheads in hopes of overcoming U.S. missile defenses and mitigating the risk of its nuclear forces being knocked out by a preemptive strike. That is intended to persuade Washington that war with North Korea could prove unacceptably destructive, thereby deterring attack and enhancing Pyongyang’s leverage to extract concessions in negotiations.