Why North Korea Won't Test Missiles During the Biden-Moon Summit 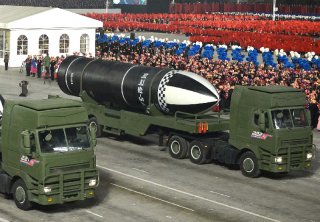 Later this week, U.S. President Joe Biden will host his second summit meeting with a foreign leader since coming into office when South Korean President Moon Jae-in visits Washington on a five-day trip. The summit follows the recent revelation that the Biden administration has completed its months-long review of U.S. North Korea policy, and roughly two months after North Korea carried out tests of both cruise missiles and short-range ballistic missiles (SRBMs), the first such missiles launch since President Biden took office.

This first meeting between the new U.S. president and his South Korean counterpart brings with it the possibility that North Korea will look to carry out some form of coercive or provocative action designed to drive tensions on the Korean Peninsula or to establish and signal the DPRK’s negotiating position.

Indeed, North Korea has demonstrated in the past a willingness to use summit meetings between a U.S. president and a regional counterpart as an opportunity to do just that. In 2017, as former U.S. President Donald Trump and former Japanese Prime Minister Shinzo Abe met in Florida, North Korea launched what would later be identified as the Pukguksong-2, a land-based variant of North Korea’s Pukguksong-1 submarine-launched ballistic missile which demonstrated continued progress in North Korea’s development of both solid fuel engines and transporter erector launchers.

Recent North Korean statements, offered in response to a speech to Congress by President Biden during which he identified North Korea’s nuclear weapons program as a serious threat to U.S. and global security, could also be interpreted as a sign that North Korea is gearing up for some sort of provocation. Pyongyang warned that it would be “compelled to press for corresponding measures” and that the U.S. would soon find itself “in a very grave situation.”

It is worth keeping all of this in context, however. The missile launch during the Trump-Abe summit in 2017 came during a period of both rapid North Korean missile testing and heightened U.S.-DPRK tensions. And as some analysts have pointed out, the recent comments by North Korea did not include any personal or vitriolic attacks against Biden, and the fact that they were rather ambiguous – coupled with the fact that they did not originate from a top-level DPRK official – suggest that they are more of an effort at diplomatic posturing designed to provide North Korea with flexibility moving forward than a warning of an impending provocation.

Rather than engaging in an act of coercion in the buildup to or during the Biden-Moon summit, North Korea is more likely to continue to employ a wait-and-see approach with regards to its foreign policy towards the United States as it works to get an accurate read on what exactly the Biden administration’s new policy will look like in action. So far, the administration has revealed only the broad outline of the new policy, and has yet to reveal more specific details regarding implementation and other tactical details. The notable omission of any reference to the Biden administration’s new policy suggests that North Korea is at least for now withholding judgment.

One element of the policy reveal that will surely have caught North Korea’s attention is the suggestion by at least one official involved in the review process that the Biden administration’s policy would look to build on past agreements, including the 2018 Singapore statement. That statement, signed by former President Trump and North Korean leader Kim Jong Un during the first of two summit meetings between the two leaders, included calls for the United States and North Korea to establish new relations, efforts towards building a peace regime on the Korean Peninsula, a DPRK reaffirmation of the 2018 Panmunjom Declaration along with steps towards the complete denuclearization of the peninsula, and a commitment towards the recovery and return of the remains of American POWs in North Korea. A top National Security Council official recently confirmed that the Biden administration’s diplomatic efforts towards North Korea would be based on the Singapore statement, and it is likely that North Korea will want to assess the extent to which this is true before it engages in any sort of provocation.

North Korea will almost certainly resume missile testing and return to a strategy of probing the limits of U.S tolerance as it looks to continue to develop its ballistic missile capabilities, particularly if it does not see what it perceives as favorable conditions for diplomacy with the United States. But for now, North Korea remains likely to continue to assess the Biden administration’s approach before it does so.