Why A Peace Declaration Ending the Korean War Matters 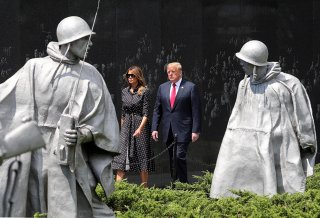 The 70th anniversary of the outbreak of the Korean War could have been celebrated in a very different way. At a certain point, one a couple of years ago, all the right stars seemed to have aligned: an 'engagist' South Korean president; a North Korean leader who seemed genuinely interested in starting a serious negotiation with the United States, and the international community; an American president who was willing to meet with the leader of a “brutal” regime, a leader he had even mocked as “rocket man.” It seemed this celestial alignment was particularly auspicious. The blowing up of the Inter-Korean Liaison Office would seem to have dashed such hopes, reaffirming, with extreme violence, that the legacy of the Korean War still lingers over the peninsula.

The armistice which halted fighting and established the demilitarized zone, or DMZ, was signed on July 27, 1953. It was meant to be temporary, but the Geneva Conference, held in 1954, failed to deliver a full peace deal because both sides considered themselves to be the victors. As a result, the situation has remained perpetually tense, and since the 1990s, North Korea has frequently declared that it would no longer abide by the armistice. Should 2025, the year that will be the war's 75th anniversary, be one of celebration too rather than just commemoration, a peace treaty must be signed. It is a step necessary to revive the prospect of unification.

The discussions surrounding a potential peace treaty have a rather long and tortuous history going back to the time of the armistice agreement. The viewpoints, intentions, strategies, policies, and actions of the countries involved—particularly South Korea, North Korea, and the United States—have changed over time, often diverging from, and frequently clashing with, each other.

Two rather prominent issues have plagued the discussions around a potential peace treaty. One is a matter of timing. The U.S. has insisted that a peace treaty should be discussed and negotiated only after North Korea completely denuclearizes itself. In contrast, North Korea would prefer to see a treaty agreed to in the beginning of its denuclearization process as a security guarantee for the regime. In other words, the U.S. sees a peace treaty as the eventual result of the denuclearization process whereas North Korea sees it as an instrument for furthering the process. South Korea used to side with the U.S. but has recently, particularly under the progressive governments which have tried hard to broker peace between North Korea and the U.S., come to realize the instrumentality of a peace treaty to facilitating peace-building on the Korean Peninsula—if North Korea takes reasonably credible steps towards denuclearization. The other thorny issue in discussions on a potential peace treaty is the question of who the main stakeholders are and who the signatories would be, given that South Korea was not actually a signatory to the Armistice Agreement.

A peace settlement would be beneficial for all involved. For the South Korean president, Moon, or his eventual successor, this would tremendously improve his country’s relationship with the North and could be touted as a personal and political accomplishment. For Kim, this would be a validation of the regime to be sold at home as a huge diplomatic success. For Trump, this would be the foundation for a real denuclearization effort on the peninsula and a terrific political card to leverage in domestic politics. A successful approach would be one of sequenced and parallel actions following development of the necessary goodwill and reciprocity to move forward. A peace declaration should be offered in exchange for North Korea taking concrete and verifiable steps towards denuclearization.

Antonio Fiori is an Associate Professor of History and Institutions of Asia at the University of Bologna and an Adjunct Professor at Korea University. He is co-editor of The Korean Paradox: Domestic Political Divide and Foreign Policy in South Korea and is working on a new comprehensive textbook in Italian on the history of Asian international relations since the 19th century.