Why Progress in U.S.-North Korea Relations Is Unlikely Before 2020 Ends 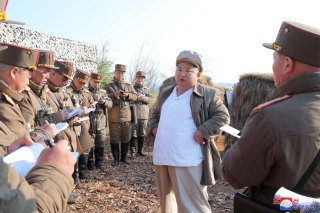 By the end of this year, no breakthrough in U.S.-North Korea relations should be expected as neither party is interested in it.

Since the failure of the summit in Hanoi in February 2019, the United States and North Korea have not managed to break the deadlock in their dialogue. Donald Trump and Kim Jong-un’s meeting at the DMZ in June 2019 turned out to be nothing more than a photo opportunity. The breakdown of working talks in Stockholm in October 2019 revealed the actual state of the U.S.-North Korea dialogue. Since then, Pyongyang has more clearly started to blame Washington for the lack of progress and rejected the current terms of negotiations. The Trump administration’s focus on internal affairs and the upcoming presidential elections in the United States mean that significant changes in the relations between Washington and Pyongyang are unlikely to take place this year.

Trump is currently preoccupied with addressing the socio-economic issues related to the coronavirus crisis, as his decisions on the domestic effects of the pandemic will largely impact the results of the current presidential election. When it comes to foreign policy, Trump will focus on criticizing China rather than the dialogue with the DPRK, knowing that ramping up anti-Chinese rhetoric could help him gain his voters’ support. In his personal letter sent to Kim Jong-un in March, Donald Trump offered to help the DPRK in its fight against coronavirus. The gesture has shown that the U.S. president has been interested in maintaining the status quo in relations with North Korea. Confirming a close relationship with Kim, Trump may have suggested that the DPRK should not choose the escalation path. Yet despite the Trump administration’s efforts to maintain dialogue with North Korea, any removal of sanctions on the DPRK seems unlikely as long as Pyongyang does not take any concrete steps towards denuclearization. However, it does not change the fact that there are more and more loopholes in the U.S.-backed sanctions on North Korea. Pyongyang has applied increasingly sophisticated techniques of circumventing the sanctions and can also rely on Beijing, whose sanctions enforcement is becoming less strict.

Uncertainties over the result of the presidential election in America will prompt North Korea to maintain a “wait and see” approach. The DPRK will not make any major moves until November, and will use the coming months to prepare a strategy for the post-election United States. In the near future, North Korea will probably continue its “head-on breakthrough” line announced at the beginning of the year. Seeing problems in the U.S. “hostile policy,” the DPRK does not feel obliged to comply with the moratorium on nuclear and ICBM tests adopted in April 2018. North Korea also warned that “the world will witness a new strategic weapon” in the near future, signaling further development of its deterrence potential and means of delivery as well as its readiness to demonstrate its growing military capabilities. The “new strategic weapon”—probably an improved ICBM using a new propulsion system—could be shown at a military parade commemorating the seventy-fifth anniversary of the foundation of the Workers’ Party of Korea in October, or on the occasion of Kim’s visit to some military facilities. Ultimately, the DPRK may test such a weapon or its liquid fuel version. However, shorter-range missiles, an SLBM, and conventional arms tests are more likely.

Drastic provocations of the DPRK are unlikely because in the long run Pyongyang is still interested in returning to negotiations with Washington, regardless of who becomes the president. North Korea remains committed to dialogue with the United States, and the alleged establishment of a new department handling negotiations with Washington at the North Korean Ministry of Foreign Affairs could be seen as a message sent to both Trump and Biden. Regardless of who becomes the next U.S. president, he will certainly face the challenge of a nuclear North Korea. But to find an optimal solution to that problem, more flexibility in terms of policy-making will be needed from both North Korea and the United States. Right now, however, that seems unlikely.

Dr. Oskar Pietrewicz is Senior Analyst of the Asia-Pacific Programme at the Polish Institute of International Affairs (PISM).