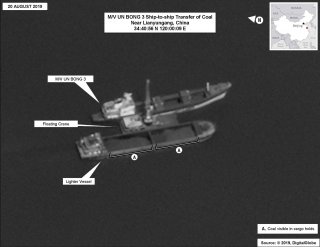 While the Twittersphere and commentariat were pouring over thin, single-sourced news accounts about North Korean leader Kim Jong-un’s imminent demise (reports South Korean officials called unsubstantiated less than an hour later) and reporters were pontificating about possible successors, the UN Panel of Experts was busy putting the finishing touches on their annual Security Council sanctions committee report. The 268-page report, full of charts, graphs, and satellite photos, makes for interesting reading if you happen to be an observer of the Kim regime’s machinations.

The bottom line, however, is anything but groundbreaking—despite layers upon layers of UN and U.S. economic sanctions over the past fourteen years, North Korea continues to find increasingly innovative ways to export what it wants, import what it needs, and test short-range ballistic missiles to its heart’s desire.

Nearly every aspect of the onerous UN Security Council sanctions regime is being flouted by the North Koreans. Financial restrictions designed to ice out North Korean entities from the international banking system have proven to be swiftly violated as Pyongyang relies on a growing list of third-party mediators who are comfortable doing business in its name. Coal, which provides hundreds of millions of dollars to the Kim regime’s coffers every year, continues to be loaded onto North Korean vessels and transmitted to foreign ships in the dead of night, often with their transponders turned off to avoid detection. And North Korean hackers and computer technicians are seriously enhancing their skill and capability, stealing tens of millions of dollars in the course of their cyber-operations.

The Panel of Experts reported that the Kim regime exported 3.7 million tons of coal between January and August 2019, netting a profit of $370 million. As expected, the bulk of those coal shipments—2.8 million tons, or approximately 75 percent—were delivered to Chinese barges, which in turn transported the shipments to Chinese ports. If Beijing truly wanted to do anything about these illicit shipments, they could enforce the Security Council restrictions on exports and imports in a far more aggressive fashion. The fact that China didn’t take action to intercept North Korean vessels, even as other member states were providing Chinese authorities with intelligence on the existence of those vessels, tells you all you need to know about Beijing’s disinterest in implementing the very sanctions it voted for.

The story is much the same on fuel imports. Security Council Resolution 2397, passed in 2017, limits the amount of fuel oil Pyongyang can receive every year to no more than five hundred thousand barrels. It sounds like a harsh quota on paper, but it’s meaningless if member states don’t enforce the limitations. A U.S. assessment provided to the Panel of Experts suggested that North Korea could have imported three times above the five hundred thousand barrel quota last year—and that finding was a conservative estimate. If the tankers that delivered the fuel oil were at capacity, then those imports could be almost eight times above the cap.

The Russians aren’t exactly being helpful either. Last December, all UN member states were expected to have deported every single North Korean with a workers visa from their territory. Like the banking, trading, and exporting restrictions, the purpose of this specific measure was to dry up another revenue source the Kim regime could use to finance its nuclear and ballistic missile programs. Not only was Beijing and Moscow late in abiding by those deportation rules, but it appears that Russia is beginning to issue new visas entirely. The Kremlin has given hundreds of work visas to North Korean laborers, in addition to thousands of student and tourist visas—a scheme many sanctions experts interpret as a Russian attempt to exploit the loopholes in the ban. Much like China is turning a blind eye to Chinese entities transacting with North Korean companies and suppliers, Russia is stamping the documents of North Koreans “students” and “tourists” who in all likelihood intend to spend their months-long stay in factories somewhere in the Far East.

The Washington foreign policy establishment will look at all this information and conclude that the sanctions on North Korea simply aren’t working. This is, of course, a perfectly solid assessment supported by the facts. But many will make the mistake of endorsing stronger sanctions as the remedy to the problem, as if just the right number of limitations on the North Korean economy will someday magically compel the Kim regime to negotiate the destruction of its own nuclear deterrent—a deterrent it has spent decades, sacrificed billions of dollars, and withstood extreme political and economic isolation to construct. If nearly a decade and a half of sanctions hasn’t done the trick, then can America really expect one more Security Council resolution or piece of sanctions legislation will succeed where so many others have failed?

The latest Panel of Experts report is sober reading because it shows how ineffective the entire sanctions edifice has become. It also exposes how unimaginative U.S. national security officials are on North Korea policy. Time and again, these officials use sanctions as a crutch instead of reassessing the foundations of the entire strategy.

The Kim regime is a master of sanctions evasion. Tougher quotas on luxury items, oil, coal, sand, and seafood won’t make that fact any less relevant.