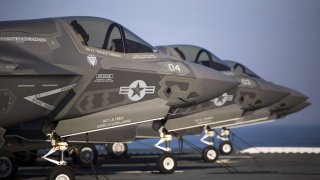 South Korea announced in 2018, as part of its Navy Vision 2045 plan, that it was developing a light aircraft carrier, in order to carry a fleet of F-35B short take-off vertical landing (STOVL) aircraft.

According to an analysis earlier this week by The Diplomat, there has been much second-guessing of South Korea’s aircraft carrier plans, mostly because the biggest threat to the country is its neighbor, North Korea, rather than an enemy likely to confronted at sea. Also, some have been arguing that such a carrier would be too vulnerable.

“For there is a country that daily faces a risk of cataclysmic war: invasion by an army of more than 1 million, mass artillery bombardment of its capital and even nuclear attack,” the Australian Strategic Policy Institute (ASPI)’s The Strategist wrote in early March. “And its latest proposed acquisition? An aircraft carrier—a meaningless hole in the water into which the Republic of Korea Navy hopes the country will pour about US$5 billion.”

Writing in The Diplomat, Jihoon Yu and Erik French argue that these criticisms are misplaced.

“This criticism fails to grasp the utility of a ROKN carrier in the event of a clash with North Korea,” the authors write. “In the event of war, North Korea would likely launch a barrage of attacks against ROK airbases, employing special operations forces, chemical weapons, and ballistic missiles. A carrier wing based at sea would be less susceptible to this initial strike and would therefore be ready to respond more swiftly and effectively.”

In addition, Yu and French said, the carrier would be of use in a war against North Korea for another reason: It would give South Korea other approaches to North Korea through “less well-defended avenues of approach.”

The authors of the Diplomat piece also argue that there are other reasons the carrier could be useful to the South Koreans-because it will allow South Korea to better defend its maritime interests around the world.

“Yes, North Korea remains the most immediate threat to South Korean security,” Yu and French write. “But South Korea has capable land forces and a powerful ally in the United States, which serve to deter this threat. North Korea’s military, while quantitatively formidable, is antiquated, poorly trained, and faces serious deficiencies in its sustainment capabilities.”

And the authors sought to rebut criticisms of the relatively small carrier as a “sitting duck” by stating that the ship will almost certainly have the protection of its U.S. allies.

“The costs and challenges involved in the creation and operation of a light aircraft carrier cannot be ignored or wished away,” the article concluded. “The ROKN’s new carrier will take time, effort, and resources. It will require extensive logistical support to operate far from Korean shores for extended periods of time. But suggestions that these resources will have little to no payoff for South Korean national security are mistaken.”