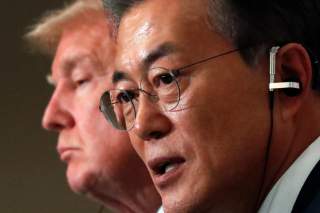 In recent years, the U.S. alliance with the Republic of Korea (ROK) has faced considerable pressure. The Trump administration is insisting that the ROK bolster its host-nation support for U.S. forces, demanding a five-fold increase in the ROK’s contribution much to the chagrin of Seoul. The Moon administration, meanwhile, has prompted concern in Washington due to its repeated diplomatic spats with Japan, the United States’ other key Northeast Asian ally.

In addition to these recent disputes, several broad strategic challenges have placed a strain on the long-standing ROK-US alliance. The ROK government worries about whether the United States is committed to defending it against the Democratic People’s Republic of Korea (DPRK), which shares a border with i. The ROK’s concerns are driven by President Donald Trump’s track-record of skepticism toward U.S. commitments abroad. Just as significantly, the DPRK has moved closer to a nuclear arsenal capable of striking the U.S. homeland, leading to concerns about decoupling.

Others in the ROK argue that the alliance impedes President Moon Jae-in’s diplomatic engagement with the DPRK. The Trump administration is understandably skeptical about Moon’s attempts to improve ties with the DPRK. President Trump’s pursuit of independent negotiations with the DPRK also has the potential to undercut the ROK’s efforts to improve inter-Korean relations. As some in the ROK have noted, this allows the DPRK to bypass the ROK in favor of direct talks with the United States.

The United States also has concerns about the current trajectory of its alliance with the ROK. Washington has long sought greater cooperation from Seoul in maintaining Asia-Pacific security. The Trump administration has shown great interest in recruiting the ROK for its “free and open Indo-Pacific” strategy. Yet, despite the ROK’s clear interest in a secure region, Seoul has been reluctant to expand its cooperation with the US beyond the Korean Peninsula. This hesitancy derives in part from the ROK’s concern about antagonizing China, the ROK’s leading economic partner.

The United States and ROK cannot afford to ignore these emerging rifts in their alliance. Some analysts have argued that these strains are problematic enough to merit a reassessment of the ROK-US alliance. We argue, however, that these obstacles can be addressed by strengthening the ROK-US alliance rather than downgrading it. Both allies can benefit from reciprocal measures designed to address one another’s concerns.

The United States can pursue a range of initiatives to reassure the ROK of its continued commitment to the alliance. It should begin by abandoning its excessive demands for increased ROK host-nation support, demonstrating to the ROK that the United States’ interest in the alliance is strategic rather than transactional. Furthermore, the United States would be well-served to reverse its unilateral decision to scale back large military exercises with the ROK; these exercises serve as an important signal of U.S. resolve to help defend the ROK and bolster the alliance’s deterrent by maintaining military readiness and interoperability. The United States can also offer to incorporate the ROK more closely into its planning and preparation for nuclear operations to reassure Seoul about the credibility of the United States’ extended nuclear deterrent.  Additionally, the United States should work closely with the ROK to develop contingency plans to deter DPRK aggression across the entire spectrum of conflict, including limited gray-zone aggression. Greater flexibility and a wider array of options will render the U.S. commitment to its alliance with the ROK more credible. Finally, to offset the DPRK’s growing ability to hold the U.S. homeland at risk, the United States could invest more in its missile defense capabilities, particularly Ground-Based Defense missiles. Again, this investment would further reassure Seoul that Washington will defend it against DPRK aggression.

At the same time, the United States can alleviate the ROK government’s concerns about the way that it’s undermining the ROK’s engagement strategy toward the DPRK. In particular, the United States needs to insist that its talks with the DPRK include the ROK government and it should maintain a unified position with the ROK during these negotiations. U.S. policymakers could also express greater support for Moon’s attempts to repair ROK-DPRK relations. Overall, these steps will emphasize to the ROK that the United States stands behind its efforts to simultaneously deter and engage the DPRK. If the United States makes a greater effort to shore up its ally’s security on the Korean Peninsula, then the ROK will be better positioned to coordinate with Washington to promote security in the Asia-Pacific writ large.

The ROK can address U.S. concerns about the regional role of the alliance in several ways. In particular, the ROK can strengthen its “New Southern Policy” while gradually expanding its involvement in the United States’ “Free and Open Indo-Pacific” strategy (building on Moon’s recent endorsement of this initiative). Diplomatically, the ROK could express greater support for key principles undergirding regional stability and security, such as freedom of navigation, peaceful resolution of disputes, and open and transparent economic agreements. Economically, the ROK would be well-served to coordinate with the United States in providing much-needed infrastructure investment throughout the region, particularly in Southeast Asia, which serves to bolster both economic interconnectivity and openness. For instance, the ROK could join in the Japan-US Strategic Energy Partnership (JUSEP) designed to increase high-quality investment in energy infrastructure throughout the Asia-Pacific region. Seoul should also expand its contributions to maritime capacity-building initiatives throughout Southeast Asia in coordination with Washington. Specifically, the ROK can bolster its funding, training, and joint exercises with Southeast Asian states to improve the ability of these states to manage emerging threats to regional maritime security. Additionally, Seoul should consider joining the Quadrilateral Security Dialogue, a forum developed by the United States, Australia, Japan, and India to discuss Asia-Pacific security.

The ROK could also bolster its ability to contribute militarily to regional security and openness. In particular, the ROK would be well-served to double-down on its plans to develop a blue-water navy capable of operating throughout the Indo-Pacific. A blue-water navy would enhance the ROK’s ability to work with the United States and other partners in sea lane protection, counter-piracy, humanitarian assistance and disaster relief, and other similar operations across Asia’s maritime commons. Finally, the ROK might explore new arrangements with the US to provide greater logistical support for U.S. operations to promote security beyond the Korean Peninsula. Doing so will highlight to the United States that the ROK, like Japan, Australia, and other partners, is willing to join hands with the United States in maintaining the balance of power in the Asia-Pacific and addressing transnational risks like piracy, terrorism, and natural disasters. Overall, the ROK can encourage the United States to double-down on its commitment to ROK security on the Korean Peninsula by undertaking these reciprocal efforts to promote U.S. interests in a more secure Asia-Pacific region.

There are obstacles to these proposed policy initiatives. Both states face budgetary constraints and a host of other policy challenges. Both administrations are also preoccupied with upcoming elections. Finally, attempts by either ally to upgrade their alliance are likely to be met with resistance from China. Nevertheless, despite the obstacles, both states stand to gain from an amplified ROK-U.S. alliance. Reciprocal cooperation and compromise will help solidify the alliance in the coming decade.

Jihoon Yu is a lieutenant commander in the ROK Navy working on naval strategy and force development at the ROK Navy HQ.

Erik French is an assistant professor of international studies at the College at Brockport.