Why South Korea Needs to Reorganize Its Priorities for North Korea 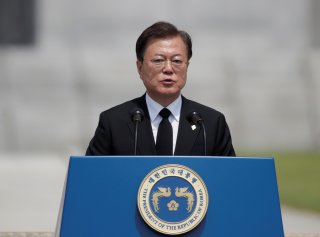 “Human scum little short of wild animals who betrayed their own homeland are engrossed in such unbecoming acts to imitate men. They are sure to be called mongrel dogs as they bark . . . where they should not.”

That is what Kim Yo-jong, the sister of North Korean leader Kim Jong-un, said last week in a burst of anger. The target of her invective: North Korean defectors who had sent thousands of anti-Pyongyang leaflets from South Korea into the North via giant balloons.

In response, South Korea’s government is considering a legal ban on sending the leaflets. Seoul should reconsider. If South Korean president Moon Jae-in imposes the ban, then Seoul will walk straight into a trap set by North Korea, which seeks to deliberately provoke South Korea in order to gain concessions, particularly with respect to nuclear weapons and missiles.

The Moon administration’s rationale for the leaflet ban is that it will prevent further deterioration in bilateral relations with the North. Specifically, the Kim regime has threatened to withdraw from a comprehensive military agreement and abolish an inter-Korean liaison office unless Seoul takes action on the leaflet issue.

Seoul’s reasoning, however, is flawed for two reasons.

Second, there is no guarantee this ban will improve Seoul’s relations with Pyongyang. In fact, the recent history of North Korea’s acts of hostility and coercion under Kim suggests otherwise.

Even after Kim signed onto several pledges with the United States and South Korea to denuclearize and improve relations, North Korea’s aggression continued. For instance, only weeks after the April 2018 first inter-Korean summit, South Korea began investigating North Korean cyber-attacks against civilian, government, and military targets.

Since 2019, North Korea’s military has also conducted a historically high number of missile and multiple-rocket launcher weapons tests and rehabilitated ballistic missile facilities that it had agreed to dismantle. Earlier this May, North Korea’s Central Military Commission publicly declared that it will be “further increasing the nuclear war deterrence of the country.”

Most of Pyongyang’s provocations violate the non-hostility and denuclearization pledges found in the comprehensive military agreement of 2018, the Panmunjom Declaration of 2018, the Singapore Joint Statement of 2018, and the 1953 Armistice Agreement.

Yet the Moon administration overlooked these provocations and instead chose to devote its efforts to starting numerous inter-Korean projects in order to strengthen cross-border economic cooperation and cultural exchange. The Moon administration hopes these inter-Korean cooperation projects will open a pathway for establishing peace on the peninsula.

For instance, Seoul’s leadership seeks to revise the South-North Exchange and Cooperation Act to enable North Korean companies to do business in the South. Other potential projects include a joint research project to inscribe the demilitarized zone (DMZ) as a UNESCO World Heritage Site as well as an inter-Korean rail construction project that began last year.

Despite North Korea repeatedly reneging on its signed commitments, in his 2020 New Year’s Day speech, Moon naively still suggested, “if South and North Korea identify realistic ways to implement projects . . . it will not only lead to international cooperation but also provide a big boost to the resumption of inter-Korean tourism.”

Unfortunately, for Moon, North Korean regime continues to reject all of South Korea’s offers for dialogue.

In reference to the politburo meeting this month, the Korean Central News Agency, a major North Korean state media outlet, quoted senior officials saying Pyongyang will treat South Korea as an “enemy” and that the politburo “reached a conclusion that there is no need to sit face to face with the South Korean authorities, and there is no issue to discuss with them, as they have aroused our dismay.”

In the past, the North Korean government did participate in various South Korean proposed projects, such as the Kaesong Industrial Complex or Mount Kumgang Resort. However, Pyongyang’s leadership sought significant control over these projects to maximize economic benefits for the regime.

The Kim regime also rejected more open engagement with the South because it presented long-term risks to regime stability. After all, a critical tool undergirding North Korean regime stability is a comprehensive information and influence activities (IIA) campaign to control the population’s ideological thinking.

Pyongyang’s IIA campaigns focus on three key messages: enhancing the Kim family regime’s reputation, countering U.S. and outside influence on the Korean peninsula, and undermining the legitimacy of the South Korean government.

From the Kim regime’s perspective, the open and free engagement between South Korean businesses and organizations would likely undermine the validity of Northern propaganda narratives regarding South Korea’s illegitimacy. Cross-border projects and people-to-people exchange could also lead the North to open up to more foreign media and influence infiltration, thereby threatening the regime’s ideological influence in the country.

The Moon administration should, therefore, reconsider not only the recent ban on anti-North Korean propaganda leaflets but also its overall North Korea strategy. Seoul should employ a coordinated political warfare strategy that incorporates all elements of power—diplomatic, military, economic, and informational—to persuade the Kim family regime that retaining nuclear weapons will bring more harm than good.

For this strategy to be effective, the Moon administration must also resolve issues negatively affecting its alliance with the United States. The most immediately pressing issue for the alliance is the negotiation of the Special Measures Agreement to decide burden-sharing costs for the U.S. troop presence in Korea. The failure to complete this negotiation could result in a worst-case scenario of U.S. troop withdrawals from South Korea, which could embolden more hostile North Korean military activity.

Furthermore, for South Korea, the most critical element for an effective North Korea strategy is to ensure a robust U.S.-South Korea alliance. This decades-long security partnership has served as the lynchpin for relative peace on the Korean peninsula, as the U.S. military footprint in South Korea has deterred North Korea from engaging in a full-scale conflict since the Korean War.

While this new approach certainly brings the risk of heightening tensions on the peninsula, continuing the Moon administration’s current strategy present the long-term risk of providing the North Korean regime more time to perfect its nuclear and ballistic missile capabilities. The Moon administration can only achieve the peace it so desperately desires by finally confronting the Kim regime for its hostile actions – rather than being intimidated by the likes of Kim Yo Jong.

Mathew Ha is a research analyst focused on North Korea and China at the Foundation for Defense of Democracies (FDD), where he also contributes to FDD’s Center on Military and Political Power (CMPP).