Why South Korea's Anti-Leaflet Bill Is a Mistake 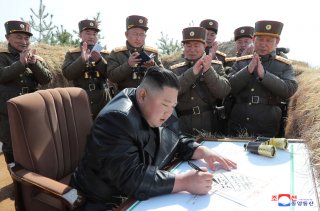 Divisions between Right and Left are as bitter in South Korea as in America. Last week the beleaguered opposition People’s Power Party staged a walk-out as the ruling Minjoo Party moved forward on legislation to ban private groups from sending political materials into the North. North Korean defector Park Sang-hak, chairman of the Fighters for a Free North Korea, complained: “This government is a savage siding with the devil.”

The latest legislation was sparked by an angry rant by North Korea’s Kim Yo-jong in June after some defectors sent brochures north via balloons. KCNA, Pyongyang’s official news agency, quoted Kim: “If such an act of evil intention committed before our eyes is left to take its own course under the pretext of ‘freedom of individuals’ and ‘freedom of expression’, the South Korean authorities must face the worst phase shortly.” Other officials threatened retaliation for the South’s “anti-DPRK” action. A couple of weeks later the North blew up the inter-Korean liaison office, built by the Republic of Korea.

After Kim’s statement, the Minjoo Party’s Song Young-gil proposed a propaganda ban. In July the Ministry of Unification announced that it planned to investigate twenty-five activist organizations that sent materials to North Korea. The following month Lee Jong-joo, director-general of the ministry’s Humanitarian Cooperation Bureau, complained that “since June, North Korea has used these leaflets as an excuse to escalate the tension of the North Korean Peninsula. Therefore, the Korean government has made a decision that this is not time for us to simply wait and see the damage and [suffering] of the people living along the border area, but it is time for us to take initiatives to make sure we can take preventions to prevent these damages from being given to the people on the border.” He also noted that “the organizations sending leaflets and balloons to North Korea has escalated tensions and were creating problems for a long period of time.”

As the legislative prohibition moved forward the ministry declared: “We welcome that the bill has been passed at the plenary meeting of the Foreign Affairs and Unification Committee.” With final approval, as early as tomorrow, seemingly assured by the Minjoo Party’s National Assembly majority—which will land the bill on President Moon Jae-in’s desk—the ministry claimed that the measure would help maintain peaceful bilateral relations and safeguard residents near the border.

Despite sharp criticism from conservatives, Moon and the Minjoo Party are right to seek better relations with the DPRK. South Korea would be the battlefield in any renewed conflict, and the North’s Supreme Leader Kim Jong-un, though no liberal, has shown interest in both economic development and diplomatic engagement, unlike his father and grandfather. However, the foundation for better inter-Korean relations should be a strong military capable of deterring attack and a free society that contrasts sharply with the DPRK.

The legal right to criticize government officials at home is an important reason the Republic of Korea’s system is superior to that of the North. More importantly, South Koreans should be free to criticize Pyongyang and its totalitarian system. The Moon government should be embarrassed, acting like the DPRK to stifle its own citizens. The issue is not just an abstract principle. Acting as censors on behalf of the Kim regime is foolish on practical grounds as well.

First, Pyongyang cannot help but view that step as weakness, even cowardice, a concession resulting from North Korean bullying. Giving in only guarantees new and greater demands in the future. Of course Kim’s government is angered by leafleteering. It abhors any criticism of its system or ideology. However, banning South Koreans from attempting to speak to North Koreans will not satisfy the North. It will simply deploy new grievances as weapons against a Republic of Korea government unwilling to stand for basic freedoms.

Second, if the DPRK wants to provoke a fight it will find an excuse to do so. It can always create a justification for another provocation. Over the last decade, the North sank a South Korean warship, bombarded Republic of Korea territory, and laid mines in the Demilitarized Zone. During the Cold War Pyongyang violated the armistice hundreds of times with raids, incursions, and attacks. Giving in to Kim Yo-jong’s rhetorical fusillade will only encourage North Korean aggressiveness.

Third, this is an especially bad time to go weak-kneed toward Pyongyang. Donald Trump’s defeat will soon leave Kim Jong-un without a negotiating partner and on the U.S. government’s policy back-burner. Even if the incoming Biden administration is inclined to talk—which is likely, but not certain—it will not be nearly as accommodating.

This means that Pyongyang needs the Republic of Korea’s assistance to deal with America. This realization might account for Kim’s surprisingly abashed response to the killing of the South Korean official who apparently attempted a maritime defection. Battered by sanctions, coronavirus-induced isolation, and multiple typhoons, and capped by Kim’s public confession of economic failure, the North has little leverage in dealing with Seoul. The Moon government should renew its push for engagement but insist on better, more responsible behavior in return. The South, not North, is positioned to set the terms for their relationship.

Fourth, while the immediate strategy in confronting the DPRK is to maintain the peace, the South’s long-term objective should be to inform and empower North Koreans to remake their own society. The North is more information accessible today than during the reign of Kim’s father and grandfather. Although leaflets and other advocacy work might be as crude as the mode of delivery, they are part of a larger effort to break the North’s information blockade. While Seoul might be wary of mounting a high-level official effort, it should informally welcome private efforts.

Finally, preventing activists from reaching oppressed northerners undermines the Moon government’s credibility. Opponents rightly denounce its shameless deference to Pyongyang, suggesting that the ruling party is favorable to communism or even a captive of the DPRK. This obsequiousness will taint any diplomatic or economic cooperation, which will be dismissed as favoring the North.

Seoul’s over-eagerness to please North Korea will affect the South’s relationship with the United States, too. In Washington, there is enduring hostility toward engagement with North Korea. That viewpoint causes U.S. administrations to take a hard line and push their perspective on the South, especially through sanctions policy. The perception that the Republic of Korea is soft on communism reinforces bilateral suspicions, ultimately undermining prospects for improved North-South cooperation.

The Korean War was a great tragedy. The most important outcome was preserving the South’s independence and allowing it to develop into a democratic, free, and prosperous society. That should make Seoul confident in its dealings with the North. And a confident South Korea should be an advocate on behalf of the fundamental rights of all Koreans.

Doug Bandow is a senior fellow at the Cato Institute. A former special assistant to President Ronald Reagan, he is author of Foreign Follies: America’s New Global Empire and co-author of The Korean Conundrum: America’s Troubled Relations with North and South Korea.