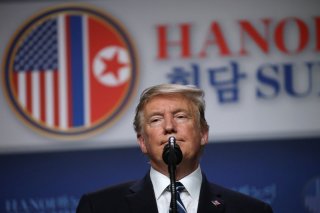 The coronavirus pandemic has put many U.S. foreign policy priorities on the back burner, including the North Korea dilemma. But this longstanding problem continues to deepen regardless of COVID-19’s trajectory. In March, Pyongyang conducted five short-range ballistic missile and rocket launches. In addition, North Korea is expanding existing rocket launch facilities and building new ones. The unexplained disappearance of North Korean leader Kim Jong-un in April also led to much speculation about the future of the North Korean regime. Meanwhile, the U.S. presidential elections looms large over North Korea’s calculations. What’s in store for the rest of the year?

U.S.-North Korea relations will likely remain deadlocked through 2020 for several reasons. The main reason is that neither side seems willing to demonstrate any real flexibility and deviate from its maximalist negotiating position. Washington refuses to provide meaningful sanctions relief until after North Korea completely denuclearizes. Similarly, North Korea refuses to take significant denuclearization steps or even return to the negotiating table until the United States provides, or at least signals a willingness to provide, major sanctions relief. Some analysts have suggested that U.S. assistance related to COVID-19 and other humanitarian concerns could serve as a catalyst to restart diplomacy, but these measures will likely not be helpful because they don’t address the underlying fundamental issues.

It’s hard to envision anything that could cause any dramatic shifts from either side, at least this year. The Trump administration appears to be satisfied with, or at least willing to tolerate, the status quo as long as North Korea doesn’t take provocative measures that threaten the United States or cause enough public concern that an administration response would be required. A major North Korea provocation—such as a nuclear or ICBM test—could cause the administration to reassess its current policy, but it seems unlikely North Korea will take any such action in the near term. As long as the North Korean threat appears to be kept at a simmer rather than a raging boil, we won’t see significant changes from the administration. Of course, things could change in a second Trump term or a new Democratic administration. But there is not much room for optimism about dramatic shifts in U.S. policy toward North Korea because of the structural constraints of U.S. politics and foreign policy making.

North Korea is also in a difficult domestic situation that warrants caution. Pyongyang needs to mitigate a potential COVID-19 crisis, manage any fallout from the speculation about Kim Jong-un’s health, respond to the U.S. unwillingness to provide sanctions relief, and continually reassert the regime’s credibility due to a failing economy.

Pyongyang is also savvy about understanding U.S. and international redlines. Recent experience indicates that a nuclear or ICBM test would likely be met with additional U.N. sanctions, U.S. threats of military action, and a reduction in humanitarian assistance, even from countries like China. More likely, North Korea will conduct a steady stream of lower-level provocations, like the recent short-range missile tests and gunfire across the demilitarized zone, to maintain pressure on Washington and Seoul while not crossing the line. North Korea could also conduct more ambiguous provocations like the 2014 cyber-attack on Sony Pictures or the 2015 landmine incident, which take longer to attribute and so are not likely to encounter immediate retaliation.

Pyongyang will likely wait until after the November elections to get clarity on U.S. political leadership before deciding on a path forward. If President Trump is re-elected, North Korea could try to re-engage him again to see if negotiations can be salvaged. If a new president is elected, North Korea could potentially engage in a significant provocation to capitalize on the leadership transition, test the new leader, increase the stakes, and dictate the context for future U.S.-DPRK relations. This would be a mistake for North Korea because it would immediately undercut any U.S. public support for engagement and reinforce those who are predisposed to enhancing pressure on the regime.

Ultimately, short term or long, U.S.-North Korea relations will not change until there is a radical shift in U.S. policy, North Korea’s policy, or both. Indeed, frustration with the status quo is one of the reasons why the guessing game about Kim Jong-un’s health ran rampant last month and a “collapsist” strain persists among some U.S. analysts. On the U.S. side, there are dueling campaigns to shift the North Korea policy toward a more authentic version of maximum pressure or a more reciprocal, confidence-building approach that emphasizes peace and denuclearization in parallel. But until something dramatic happens, we shouldn’t be holding our breaths under our protective masks for a breakthrough in U.S.-DPRK relations.