Why U.S.-South Korea Joint Military Exercises Keep Getting Scaled Back 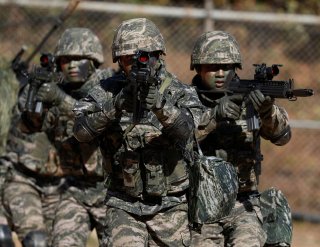 South Korea and the United States are pressing on with joint annual military exercises despite concerns over the coronavirus, reaffirming Washington’s security commitment to the Republic of Korea (ROK) at a time of simmering military tensions and ongoing regional uncertainty on the Korean peninsula.

Seoul’s Joint Chiefs of Staff announced earlier this week that ROK and U.S. forces will kick off a ten-day drill session that will run from August 18-28. These will be the first major military drills between the two countries in 2020, following the February cancellation of traditional springtime exercises due to Coronavirus concerns. The upcoming “command post training”—a term employed by Washington and Seoul to circumscribe the political implications of calling it a military exercise—will be conducted in two parts: defensive operations from August 18 to 22, and offensive countermeasures from August 24 to 28.

The training, which was delayed by several days after initially being planned to begin this Sunday, coincides with what increasingly appears to be a new coronavirus spike in South Korea. The Joint Chiefs of Staff stated that they are “comprehensively taking into consideration the COVID-19 situation.” The bulk of this year’s training will accordingly be conducted via computer simulation, a significant reduction in scale from the field combat drills of prior years. Neither the content of this month’s exercises nor the number of participating servicemen on both sides, has been revealed as of the time of writing.

This month’s Command Post Training reaffirms Washington’s defense commitment to ROK on the heels of at least three North Korean missile tests since July 25. Nevertheless, the U.S.-ROK security relationship faces an ambiguous future since the Trump administration has expressed its intention to rethink the extent of Washington’s military presence on the Korean peninsula.

Popular news coverage has overwhelmingly focused on the ongoing debate over prospective troop reductions in South Korea, but a more consequential development is brewing in the background. Since 1978, wartime operational control (OPCON) over South Korea’s armed forces has belonged to ROK/US Combined Forces Command (CFC), a joint body led by a four-star U.S. General. South Korea formally requested in 2007 that wartime OPCON be returned to Seoul; after years of delays, it now appears that the transfer is slowly moving forward with newfound political goodwill from both the Trump and Moon Jae-In administrations. If successful, the planned OPCON transfer would facilitate Washington’s goal of playing a less pronounced role in Korean affairs and serve as a gesture of goodwill to potentially restart currently moribound negotiations with North Korea. It would also propel President Moon’s ambitious initiative, outlined in his Defense Reform 2.0 package, to support the growth of ROK’s domestic military industry.

The August exercises were slated to contain a Full Operational Capability (FOC) test to determine if Seoul meets all the originally agreed-upon conditions for the transfer, but the FOC can no longer be completed following the pandemic-related scale reduction of drills.

The FOC must be followed by a Full Mission Capability (FMC) test, only after which operational command will be formally transferred to South Korea. It remains to be seen if the Moon Jae-in administration can surmount this latest setback to complete all transfer steps by the summer of 2022, which marks the end of President’s Moon’s five-year term.