Will China Take the Seoul Train to a New Korean Future? 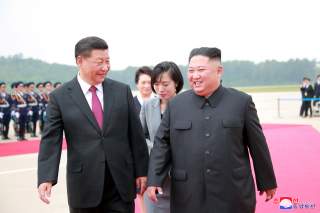 China’s rise is inexorable, and the decline of U.S. power an inevitable corollary. Although the United States has dominated the world’s oceans since World War II, the best outcome now is for the United States to gradually and gracefully relinquish its global maritime hegemony, much as the United Kingdom once did, beginning around a century ago. This is the context in which the changing role of China on the Korean Peninsula should be assessed. Clearly the most salient issues are North Korean denuclearization and the prospects for reunification of the Korean Peninsula.

Recently there have been two historic face-to-face summit meetings between President Donald Trump and North Korea’s “Great Leader” Kim Jong-un, and it is arguable that China’s customary leverage as a mediator between the two Koreas has been somewhat weakened by this direct diplomacy.

Moreover, although the second of these summits in Hanoi, Vietnam, on February 28, 2019, was largely dysfunctional, it is obvious that there are different opinions on how to achieve a peaceful incremental denuclearization of North Korea, and that China’s role in any such process has essentially disappeared. The six-party talks were China’s principle sphere of influence, most notably the Agreement on a Joint Statement in September 2005, but these talks were discontinued after North Korea’s second nuclear test in May 2009 and they must surely now be considered as dead. Indeed, the fact that Kim Jong-un chose to meet with Russian president Vladimir Putin, on April 25, 2019, in Vladivostok soon after his second summit with Trump rather than with Chinese president Xi Jinping—whom he had previously met three times within a year—seems to confirm China’s diminished leverage on the Korean Peninsula.

If there is any possibility that North Korea intends to trade its indigenous nuclear deterrent for desperately needed food, energy, and hard currency, then the North Korean regime will insist upon solid and substantive guarantees for its survival. And which countries are best-placed to offer such guarantees? The answer is clearly South Korea and the United States, not China. President Moon Jae-in is pursuing a strategy of peaceable engagement and working towards inter-Korean rapprochement, for example by abandoning the broadcasting of psychological warfare into North Korea, as part of the 9/19 military agreement. Meanwhile, the United States has suspended the combined forces exercises which North Korea sees as a preparation for invasion. These policies should be understood in the light of reassuring North Korea, and as steps toward providing the necessary guarantees for regime survival.

China’s support for North Korea is codified by three principles: denuclearization of the Korean Peninsula, maintenance of peace and stability on the Korean Peninsula, and the peaceful resolution of issues through bilateral dialogue between the two Koreas. It is now widely accepted that these three principles are no longer sufficient to persuade the North Koreans to reliably fall into line with Chinese interests, and this has forced Xi Jinping to change his attitude toward the two Koreas, especially toward North Korea. The reduced influence of China on the Korean Peninsula has been exacerbated by Trump’s chaotic unpredictability, and China has effectively lost the role which it once enjoyed as a mediator between Washington and Pyongyang to resolve the nuclear stand-off.

If China wants to regain its relevance on the Korean Peninsula, then it will have to understand Korean issues from a Korean perspective, getting beyond China’s narrow perspective entirely based on its own history and interests. China urgently needs an alternative strategy to address Trump’s transactional diplomacy, both about the Korean Peninsula, and also more broadly. Instead of constantly undermining U.S. enforcement of UNSC sanctions against North Korea by facilitating illegal ship-to-ship oil transfers between Chinese and North Korean vessels on the high seas, China would do better to start playing by international rules, so that other countries can trust its promises. In fact, China should be gratified by the recognition that it is now too large and important to be allowed to continue to bend the international rules for its own advantage, and the ongoing trade war between the United States and China is another chapter in this story.

China should develop fresh policies which take a more balanced approach towards the two Koreas, and there are certainly some perceptive scholars and experts in China who are critical of China’s existing policies on the Korean Peninsula, and who also question how China is handling Trump. It is time for China to rise above narrowly historical and militarist perspectives, otherwise it will miss the opportunity to contribute to resolving current issues on the Korean Peninsula. These tired old zero-sum games are no longer serving China’s long-term interests, for example: reflexively denouncing the U.S. presence on the Korean Peninsula, condemning the enhancement of weapons interoperability, using commercial power to complain about THAAD, hedging China’s influence between the two Koreas. Such policies are no longer constructive: China needs new thinking to come up with something fresh.

For China to cope with Trump’s erratic approach to the Korean Peninsula, for China to deal with a less cooperative and nuclear-armed North Korea, and for China to balance its policies towards a South Korea now seeking more autonomy from the United States, a radical new departure will be needed from the status quo. Both in China and South Korea there are plenty of new ideas being discussed about Korean issues. For example, Trump’s capriciousness has diluted the influence of pro-U.S. factions which previously dominated South Korean policy toward China and toward North Korea, while there is now an opportunity for China to mount a charm offensive to strengthen pro-China voices in South Korea.

In conclusion, with United States power declining (at least in East Asia), and with the rise of China, South Korea is sensibly pursuing policies designed to establish a greater degree of self-reliance, a strategy which will make it easier to keep a balance between the two great regional powers. And yet Xi Jinping continues to undermine Moon Jae-in’s initiatives towards building deeper and more harmonious relations between the two Koreas. It is striking, and rather mysterious, that China’s policies are so clearly ill-adapted to the changing situation on the Korean Peninsula. Chinese foreign policy is generally perceived as taking a more long-term view than that of the United States, but at present both countries seem to have lost sight of the future.