Will Trump Risk National Security and a Deal with North Korea? 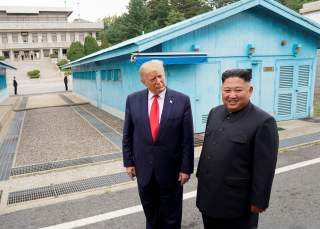 Rumors have swirled over the last several months that the Trump administration may be planning to “unsign” the 1996 Comprehensive Nuclear Test Ban Treaty (CTBT). Washington’s withdrawal from the Intermediate-Range Nuclear Forces Treaty and refusal to commit to extending New START make it all too easy to believe that these rumors may be true.

The CTBT bans nuclear testing anywhere on earth, but it has not been enforced because eight countries—including the United States—have yet to ratify it. Although President Bill Clinton led the world in signing the treaty twenty-three years ago, the Republican-led Senate voted it down by a margin of 51-48 two years later. The Obama administration’s efforts to pursue ratification also proved no match for the entrenched Republican opposition. Their objections largely hinged on the same concerns raised in the Senate a decade prior, ignoring new developments in areas like treaty verification that would have bolstered the case for its entry into force.

While prospects for the CTBT appeared dim at the end of Obama’s term, they are poised to become far more dismal soon if some in Washington get their way.

In 2018, the Trump administration adopted its new nuclear strategy, which states that the United States will no longer pursue the ratification of the CTBT. In March 2019, four Republican senators sent a letter to President Donald Trump asking whether he would consider “unsigning” this agreement, which they characterized as “deeply flawed.” This summer, both the Defense Intelligence Agency and the Department of State alleged that Russia—a CTBT party—was violating the treaty without providing any evidence to support this conclusion. An interagency discussion is currently underway to determine what additional steps the administration might take now.

While treaty opponents may welcome these developments, the reality is that leaving the CTBT would deal a serious blow to U.S. national security. For one thing, it would mean that the United States would lose access to data gathered by the Comprehensive Nuclear Test Ban Treaty Organization’s International Monitoring System. This sprawling network of 337 facilities can detect very small nuclear explosions anywhere in the world, which countries can use to advance their nuclear arsenals. Even critics of the treaty concede that the system affords the U.S. valuable information that it could not obtain through other means.

What is more, if Washington left the CTBT, then Moscow would likely follow suit. Once freed from the treaty’s constraints, Russia would be able to develop new nuclear weapons that require explosive testing, which it is now prohibited from doing. With the future of the only remaining bilateral arms control treaty—New START—in doubt, the United States could quickly find itself embroiled in a costly and dangerous nuclear arms race for the first time in fifty years. Unlike its Cold War antecedent, though, this race would almost certainly involve China and could be further complicated by a parallel buildup of advanced conventional systems.

These outcomes are entirely avoidable, considering that the United States no longer needs explosive testing to ensure the safety or credibility of its nuclear deterrent. Unfortunately, this line of reasoning won’t be enough to convince CTBT opponents in this administration that leaving the treaty is a bad idea. Among those who fundamentally see arms control as an act of altruism, not self-interest, the security benefits the treaty affords are not worth the perceived constraints it imposes on U.S. military flexibility. Instead, CTBT supporters must come up with new reasons not to unsign that align with Trump administration priorities.

One such argument is tied to Trump’s efforts to “denuclearize” the Korean Peninsula. Before taking any steps to unsign the CTBT, the administration should consider how North Korea might react if the United States were to lower the barriers to resume its own explosive testing. Trump, who has no major foreign policy achievements to his name, has put his self-styled image as a dealmaker on the line to persuade Kim Jong-un to dismantle his nuclear arsenal. His success to date has been limited, however, and the window of opportunity for any concrete outcomes at all appears to be rapidly closing.

Kim has certainly benefited from Trump’s personal investment in this issue, which has afforded him an unprecedented level of access, recognition, and validation from the American president. He has been careful, however, not to commit to any meaningful actions absent sanctions relief and negative security assurances, which the United States so far refuses to give. The only public indications of a forward movement have been North Korea’s unilateral dismantlement of its nuclear test site at Punggye-ri and a moratorium on nuclear and ICBM tests, which it has upheld for the last two years. While neither of these measures is the result of a deal with the United States, per se, they are some of the only outcomes to which Trump can point when arguing that his efforts have borne fruit.

These gains would be thrown into doubt if the United States were to leave the CTBT. Doing so would provide an immediate pretext for North Korea to reverse its commitment not to conduct further nuclear weapons tests. Pyongyang appears to be considering this move anyway as negotiations with Washington stall. It would also undermine the rationale Kim gave for concluding a moratorium in the first place, namely, that nuclear testing is no longer necessary now that North Korea’s nuclear weapons are complete.

Such a move would be ill-timed, too, as North Korea’s patience with the United States wears thin. Last month, Foreign Ministry advisor Kim Kye Gwan issued a statement urging Washington to act “wisely” through the end of the year if it wanted to salvage any prospects for a denuclearization deal. Surely, even devout CTBT opponents can see how leaving the treaty now would fall very short of this mark. These potential consequences may be enough to convince those who have the president’s ear that unsigning the CTBT would do more harm than good.

To be clear, even if the U.S. signature on the treaty remains valid, the CTBT will still be vulnerable to future onslaughts. The only surefire way to protect it is through U.S. ratification, which remains highly unlikely under the Trump administration.

Making real progress toward this goal will require the investment of high-level stakeholders who see the intrinsic value of this complex and technical treaty. It will also take a dedicated outreach initiative to convince lawmakers that it’s still worth the effort to see the CTBT across the finish line. For now, then, the top priority must be ensuring that the current leadership does not terminate prospects for the treaty’s entry into force, given its central importance to international security and nonproliferation. Linking it to outcomes on the Korean Peninsula might just be enough to preserve the status quo until more, and more ambitious steps, are possible.

Sarah Bidgood is the director of the Eurasia Nonproliferation Program at the James Martin Center for Nonproliferation Studies, which is located at the Middlebury Institute of International Studies at Monterey.