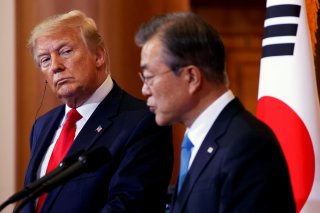 The Trump administration’s supposed decision to cut the U.S. military presence in Germany by roughly one-third produced a catacomb of outrage that is becoming all too familiar for the White House. The news of the impending departure—the Wall Street Journal reported last week that the 9,500 troop reduction will be completed by September—caught German officials in Berlin by surprise and elicited a fury of panic inside Washington, D.C. Former U.S. Ambassador Nicholas Burns, an adviser to the Biden campaign, referred to the cut as "a significant political and symbolic blow” to U.S.-German relations. Peter Meyer, German Chancellor Angela Merkel’s coordinator for transatlantic issues, blasted the move as “completely unacceptable.”

On the surface, what happens in Berlin may not matter for the Republic of Korea. Officials in the Moon Jae-in administration, however, don’t have the luxury of ignoring what happens tens of thousands of miles away. The South Korean government has always had concerns about what Donald Trump may or may not do. The news about an imminent U.S. drawdown in Germany won’t do much to level out the anxiety.

Could a U.S. redeployment from Germany be a preview to a similar redeployment in South Korea, which hosts a contingent of 28,500 U.S. military personnel on a permanent basis?

It would seem to be a ludicrous proposition on its face. In addition to Japan and Australia, South Korea is the closest treaty ally the United States has in Asia—a partner whose own troops and doctrine have been heavily intertwined with the U.S. military for decades. Unlike Germany, a master at excuse-making for failing to meet its 2% GDP threshold on defense spending and whose air force is unprepared for combat, Seoul has been pouring money into procurement for years. The South Koreans have ordered 60 F-35’s since 2014, with the latest purchase just last year. The Moon government plans to spend an additional $239 billion on military modernization over the next 5 years, an influx that will include everything from more destroyers and anti-missile systems to submarine-based cruise missiles and reconnaissance satellites.

Trump, however, is an unpredictable leader with a short-fuse and little time for gruff. South Korean officials have never been able to get a handle on the mercurial U.S. president and remain mystified about why the former real-estate magnate seeks to monetize the bilateral relationship.

What they do understand is that the current occupant of the Oval Office is a long-time skeptic about South Korea generally; enjoys poking the South Korean government in the eye, and at one point ordered the Pentagon to withdraw the family members of U.S. military personnel from the country. South Koreans also have access to the internet, which means they are able to find Trump’s 1990 interview in Playboy where he specifically called out South Korea by name for being a “so-called” U.S. ally who rose to the top of the pack on America’s back.

The Moon administration is also fully aware that this particular White House is obsessed with the cost-sharing issue and is focused like a laser-beam on forcing the South Koreans to pay a larger share for sustaining the U.S. troop presence—so much so that there were rumors last November of the Trump administration possibly reducing the number of U.S. troops by 4,000 in order to pressure Seoul to accept Washington’s position. While U.S. officials quickly squashed the reports as unsubstantiated grist for the rumor mill, it’s highly likely the thought crossed more than a few minds in the corridors of power. With Trump’s rejection last April of Moon's last offer and Small Measures Agreement talks at a standstill, one should not be surprised if South Korean officials responsible for relations with the U.S. remain jittery.

The last time a U.S. president sought to downsize the U.S. military presence in South Korea, the year was 1977 and Jimmy Carter was in the White House. The newly-inaugurated commander in chief had grand ideas of withdrawing U.S. forces from the Korean Peninsula in phases throughout his term to make it more politically palpable at home and to provide Seoul with more time to prepare. Carter’s initiative, as we now know, was strongly opposed and debated under the weight of the U.S. foreign policy apparatus. Were Trump to take a page out of the Carter playbook, he would run into a similar wall of congressional obstruction, extreme panic in the Pentagon, and a bevy of anonymous, senior national security officials telling the media about how such a withdrawal would kill the 70 year-old U.S.-South Korea alliance. As a shot against the bow, Congress included a provision in the 2020 National Defense Authorization Act preventing the U.S. troop presence in the South from falling below the current 28,500 unless Trump himself justified the decision to lawmakers on national security grounds.

President Moon has already been biting his nails for months over the cost-sharing talks. One can imagine his fingers turning into nubs after hearing about Washington’s force plans for Germany.