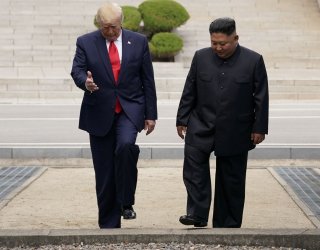 A peace treaty ending the Korean War is achievable by 2025, the 75th anniversary of the Korean War. However, North Korea’s decision to demolish the Joint Liaison Office on June 16, 2020, coupled with the vitriol from sister of Chairman Kim Jong-un and heir apparent Kim Yo-jong, will once again slow the process of reconciliation and embolden the critics of negotiations.

North Korea wants nuclear weapons as a deterrent to any aggressor seeking regime change. Our job has been to convince North Korea that regime change is not our objective. In addition, we must show Pyongyang that, with denuclearization, a normal relationship with the United States is possible, which would entail the removal of sanctions and access to international financial institutions and foreign direct investments. To date, despite the assurances provided to North Korea with the Agreed Framework in 1994, the Six Party Talks Joint Statement in September 2005, and the Singapore Summit Statement in June 2018, North Korea has walked away from these agreements and built more nuclear weapons.

What has been missing during all these years of negotiations and resultant agreements is “trust.” Their negotiators cite Libya as an example. Our job has been to convince North Korea that they are not Libya, that they will receive the security assurances they want, and that normalization of relations with the United States is their best security assurance. Furthermore, Pyongyang must realize that economic development assistance will benefit its people and enhance the leadership’s stature, and that progress with intra-Korean negotiations will lead to peace, prosperity, and reconciliation on the Korean Peninsula as well as its eventual unification.

To achieve these objectives, a new strategy that focuses on “actions-for-actions,” where benefits accrue to North Korea as they move forward with complete and verifiable denuclearization, is necessary. This process will take time, but as long as there is progress toward denuclearization, with commensurate deliverables to North Korea, the ultimate objectives are achievable.