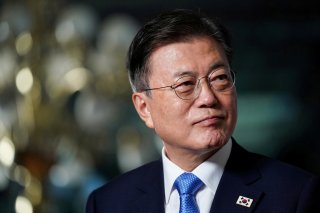 Two of the leading opposition contenders for the 2022 Korean presidential election attacked each other fiercely after their party, People Power, narrowed the primary down to the final four.

Long-time party leader and 2017 presidential candidate Hong Jun-pyo called former prosecutor and party newcomer Yun Seok-youl, a member of a “criminal community,” after Yun declared victory in the final elimination round. Yun responded that Hong should “wash his hair and mouth.”

Hong and Yun, along with five-term representative Yu Seung-min and former governor of Jeju province Won Hee-ryong, were all announced as the four finalists in the race for the nomination of the People Power Party. But national election law prevents the full tallies and even the order of the rankings from being released.

Nonetheless, Yun’s camp quickly issued a statement thanking his supporters for their “overwhelming victory.” Hong’s camp pushed back, claiming that Hong received “overwhelming support,” and an anonymous aide told the Dong-A Ilbo that the results were within the margin of error. The Dong-A Ilbo, citing widespread rumor and anonymous sources, reported that Yun placed first, followed by Hong, Yu, and Won, in respective order. Those results are in line with surveys of the public, which show Yun and Hong in a tight race, followed by Yu and Won considerably behind.

“I don’t attack people for anything but the facts. . . . I said what I said because it is an infringement of the rules to make false claims about the unconfirmed results of a primary,” Hong posted to Facebook.

Hong and Yun are both known for their sharp tongues and refusals to back down from making controversial statements. In his acceptance speech for the 2017 nomination, Hong called himself a “resolute strongman.” Yun made a name for himself investigating high-profile corruption of politicians and corporations, including Samsung and former conservative president Park Geun-hye. However, while serving as prosecutor general since 2019, his investigations into allies of President Moon Jae-in caused the Moon administration to push for his ouster.

Now the nomination battle enters its final month. Candidates will participate in a series of discussion days across the country before the ultimate nominee is announced on November 5. Party officials’ votes will be combined with a weighted sample of public opinion polls.

The outcome could result in a shift of policy on North Korea issues and the economy. All four candidates for the People Power Party support strengthening relations with the United States and slowing down the current Moon administration’s push for detente with North Korea. Hong and Yu have both called for the deployment of American tactical nuclear weapons in South Korea. Yun also said he would be open to the idea if security conditions demanded it. On the other side, Democratic Party nominee Lee Jae-myung said South Korea should take the lead in pushing for “peace”—including easing certain sanctions—with or without American approval.

After the victories of the People Power Party in the Seoul and Busan mayoral elections, optimism is with the PPP. Moon’s approval rating has dropped below 40 percent, and the PPP’s approval rating is at a five-year high, though still only 34 percent. (The party, which has reformed itself and changed its name multiple times, has struggled to recover from the Park scandal in 2016–17.) Since the beginning of 2021, a plurality of voters has consistently said they support a change from the current administration.

Yet when Koreans are polled on hypothetical matchups between real candidates, the Democratic nominee usually comes out ahead of the PPP challengers. The Korean Society Opinion Institute polling reported on October 11 shows Lee leading Yun by three points and leading Hong by two points.

The fact that most Koreans want change but a plurality prefers to keep the same party in the Blue House is not as much of a contradiction as it may seem. Lee Jae-myung’s victory over Lee Nak-yeon in the Democratic Party primary, which was made official on October 10, is a change of sorts. Lee Nak-yeon, who hails from South Jeolla province and was prime minister for Moon’s first three years in office, was the clear favorite of the Moon faction.

Lee Jae-myung, on the other hand, has fashioned a populist image and clashed with Moon hardliners. He supports implementing universal basic income nationwide. As governor of Gyeonggi, the most populous province in the country, which surrounds Seoul, he had a chance to experiment with it, implementing the largest coronavirus stimulus program in the country. During the course of the primary he attracted more support from independents and third-party voters than any other candidate, surveys showed.

While Lee might be expected to do better than a generic Democrat in a general election, Yun and Hong each carry baggage that could weigh them down. Yun has made a series of controversial remarks, saying he opposes any kind of regulation of the economy, including limits on hours employees can work or the safety of food available for human consumption, citing Milton Friedman’s ideas. His mother has been charged with allegedly defrauding the National Health Insurance Service of 2.3 billion won ($20 million), and he has been accused of abusing his power as a prosecutor to file criminal complaints against Democratic candidates for Assembly in 2020. Party leadership, however, came to support Yun and believes he has his own Teflon shield.

Hong, who was first elected to the Assembly in 1996, risks being viewed as a retread when the PPP, led by the youngest party chairman in history, is trying to revitalize its image. He would be the oldest president-elect since Kim Dae-jung was elected twenty-four years ago. He has his own reputation as a firebrand, branded as “Korea’s Trump.” But that can also be a source of strength for his appeal to young men who appreciate his brashness.