The Legacy of Japan’s Shinzo Abe 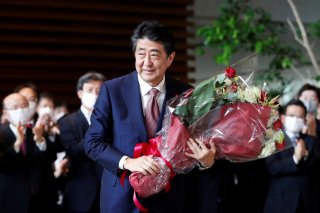 For close to a decade, the pre-eminent Western statesman has resided, not in Washington, not in London, Paris, or Berlin, but in Tokyo. Shinzo Abe, Japan’s longest-serving prime minister before announcing his resignation in August, stands not only as a statesman of vision but as a skillful diplomat who ordered Japan’s diplomacy and resources toward the realization of a Free and Open Indo-Pacific anchored in a stronger Japan-U.S. Alliance.

A decade before President Donald Trump spoke of his Indo-Pacific region vision in November 2017, Abe was advancing a vision of an “Arc of Freedom and Prosperity,” extending from Northeast Asia to Central Asia and the Middle East, governed by universal values—democracy, freedom, human rights, the rule of law and the market economy. In 2016, he expanded the geographical scope of his vision to include Africa and Asia, the United States and Australia, joined by the confluence of the Pacific and Indian Oceans and governed by “freedom, rule of law, and the market economy,” and “free from force or coercion.”

The Free and Open Indo Pacific became Japanese government policy with Abe playing a leading role in promoting the vision.

As a diplomat, Abe expanded Japan’s defense engagement with the region. In 2015, Japan, at the invitation of India, joined the India-U.S. Malabar exercise as a permanent member, and in 2019, Japan, for the first time, joined the Australia-U.S. Talisman Sabre exercise. A year earlier, Japan dispatched three Japan Maritime Self-Defense Force ships, including the helicopter carrier, Kaga, for an extended three-month deployment through the South China Sea and Indian Ocean that featured port calls and training exercises with the navies of Indonesia, Singapore, Sri Lanka and India.

At the same time, Abe worked to nourish Japan’s Strategic Partnerships with India, ASEAN as well as with individual ASEAN members, the Philippines, Malaysia, Thailand and Vietnam, all concerned about China’s increasingly assertive actions in the Indo-Pacific region.

The prime minister, in line with his government’s 2013 National Security Strategy, revised Japan’s Official Development Assistance Guidelines to provide for the strategic use of resources, allowing the transfer of defense equipment to strategic partners in the Indo-Pacific region. Japan also initiated maritime capacity building programs with the Philippines, Malaysia, Indonesia, and Vietnam to enhance their ability to resist increasing challenges to their sovereignty. And in 2016, Japan and ASEAN adopted the Vientiane Vision setting out a comprehensive plan for defense cooperation.

Under Abe’s leadership, the government moved to refocus Japan’s Official Development Assistance to advance the vision of a Free and Open Indo-Pacific region. In its budget submission for 2020, the Foreign Ministry earmarked 70 percent of its $7 billion ODA programs to the Indo-Pacific region to provide for high-quality infrastructure projects in Southeast Asia, the Middle East and Africa.

Abe also brought his vision of a Free and Open Indo-Pacific to Europe. In a keynote speech at the European Connectivity Forum, September 27, 2019, the prime minister argued that working together, “the EU and Japan can create sustainable, unbiased and rules-based connectivity from the Western Pacific to the West Balkans and Africa.” The Financial Times, in commenting on the EU-Japan partnership, noted “while the agreement does not specifically mention China by name, the overriding ideas and language used to promote the project were clearly crafted with Beijing’s Belt and Road Infrastructure building initiative in mind.”

At the same time, confronted by a nuclear-armed North Korea and an increasingly assertive China, Abe worked to enhance Japan’s defense capabilities and the Japan-U.S. Alliance

The Abe government, under the Mid-Term Defense Plan, committed to the purchase of 105 U.S. F-35 aircraft—sixty-five F-35 model A and forty F-35 Model B aircraft. The Defense Plan also calls for the refitting of Japan’s helicopter carriers to accommodate the F-35 B vertical take-off aircraft, including operational use by U.S. aircraft. Overall spending under the Mid-Term Defense Plan totaled a record 27.47 billion yen (approximately $243 billion), an increase of 2.2 trillion yen over the previous Defense Plan, at an annual increase of 1.1 percent under the Abe government.

Meanwhile, the prime minister in 2014 moved to reinterpret the constitution to allow for the limited exercise of collective self-defense, opening the door to greater security cooperation with the United States and adopted 2015 Guidelines for U.S.-Japan Defense Cooperation. The guidelines expanded the scope of functional defense cooperation with the United States as well as with third countries. And following the 2019 meeting of the U.S.-Japan Security Consultative meeting, the Joint Statement welcomed “the alignment of the strategic policy documents of both countries; namely the United States National Security Strategy and National Defense Strategy a Japan’s National Defense Program Guidelines.” The statement expressed a “shared concern that geopolitical competition and coercive attempts to undermine international rules, norms, and institutions present challenges to the Alliance and the shared vision of a Free and Open Indo-Pacific.”

To support a rules-based commercial order in the Indo-Pacific region, the prime minister stepped into the vacuum created by Trump’s decision to withdraw the United States for the Trans-Pacific Partnership and, through dedicated diplomacy, brought into being The Comprehensive and Progressive Agreement for Trans-Pacific Partnership. The Agreement established a rules-based, free trade zone of eleven countries, Japan, Malaysia, Singapore, Vietnam, Brunei, Australia, New Zealand, Chile, Peru, Mexico and Canada, a market with a population of approximately five hundred million people, with estimated GDP of $10 trillion.

In the end, Abe was a statesman of vision and a consummate diplomat in pursuit of his vision of Japan—as a proactive contributor to international stability and security, a more attractive alliance partner in a strengthened Japan-U.S. Alliance, and of the Indo-Pacific, “Free and Open,” governed by a rules-based order, embracing western values.