10 Reasons Why Trump Is Wrong to Support Turkey 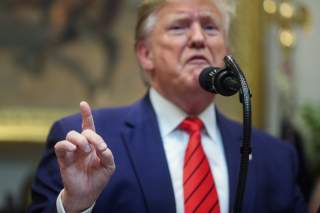 9) Were U.S. troops in Syria because Obama wanted to pivot to Iran?

The Hudson Institute’s Lee Smith argued—correctly—that President Barack Obama entered Syria initially in reaction to media pressure after the Islamic State began beheading American journalists and aid workers. The reason why the United States subsequently began supporting the YPG, however, was because of the group’s success resisting the Islamic State at Kobane. To argue that partnership with the YPG and SDF was a deliberate part of Obama administration “realignment” however is—absent any evidence to support such a position—simply a conspiracy theory.

10) Why did the U.S. government designate the PKK?

Over at National Review, Andy McCarthy—one of the country’s most incisive legal minds on questions relating to U.S. national security and terrorism—reminds that the State Department designates the PKK a terrorist group. This is was the crux of much of Turkey’s diplomatic opposition to U.S. efforts inside Syria. McCarthy is correct—although the U.S. government did have wiggle room depending on how closely linked it concluded the SDF was to the PKK. But the PKK’s designation also raises questions about the State Department’s stewardship of the list and its consideration of factors that have nothing to do with terrorism. The PKK undertook an insurgency and terror campaign beginning in 1984, but even at the height of the U.S.-Turkey special partnership the State Department did not list the PKK. This changed in 1997, as the Clinton administration sought to complete an arms sale to Ankara. The PKK remained listed long after it began peace talks with Turkey—and abided by its promises. The Syrian Democratic Council—the civilian wing of the SDF—recognized that the terror designation was a problem and applied for an OFAC waiver so they could lobby and argue their case in Washington, but the Treasury Department sat on their paperwork for more than four years, leaving them unable to effectively make their case.

In sum, Turkey is not a pro-Western country and it is not an ally. That its forces or those of its proxies have now been filmed summarily executing Kurds is no accident. Nor is Turkey the country of lavish feasts and fancy hotels laid out for supporters and visiting Congressional delegations. Erdoğan meant it when he, in Arabic, he hailed the “Mohamedian army” entering Syria. Turkey is, by any objective definition, a state sponsor of terror and Erdoğan remains a diehard opponent of the United States and the West.