9 Lessons from the Iraq War 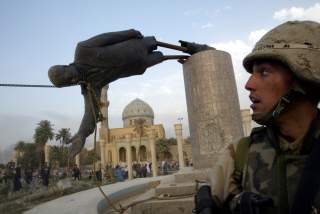 “Man’s real treasure is the treasure of his mistakes, piled up stone by stone through thousands of years,” according to Jose Ortega y Gasset, the great Spanish philosopher of the early twentieth century. For to remember the past in all its searing complexity is what separates us from the apes, Ortega goes on. By that logic, the Iraq War, which started seventeen years ago this month, should constitute among the crown jewels of knowledge and insight in American foreign policy circles.

What lessons do I take away from my support of the Iraq War?

Realize that things can always be worse. I reported from all over Iraq several times in the 1980s and had my passport confiscated for ten days by Iraqi authorities. I could not imagine a more frightening regime than Saddam Hussein’s. The country was nothing less than a large prison camp, bloodier and more repressive than Hafez al-Assad’s Syria. Emotionally, I had gotten too close to my story. Only when I reported from Iraq during the U. S. military occupation did I experience firsthand how anarchy—like the medieval Persian philosopher Abu Hamid al-Ghazali explained—is worse than tyranny, and how therefore the Iraq of the 2000s was even more terrifying than it had been under Saddam.

Following from that, don’t take order, no matter how repressive, for granted. Unless one has a comprehensive plan for implanting a new and better regime, don’t play God with the regime that already exists. As that unflinching interpreter of the human condition, Albert Camus, observed, the rebel is morally bound to have prepared a better system to replace the one he wants to overturn, or else his rebellion is itself morally tainted. Order must come before freedom because without any central authority there is no freedom for anyone.

Ground-level knowledge is superior to big picture analysis. We failed in Iraq because high policymakers did not know things that enterprising journalists knew about the place. I knew Iraq intimately in the 1980s but did not experience the worsening of sectarian divisions, along with the dramatic weakening of Iraqi society in the 1990s under the sanctions’ regime, which made Iraq especially vulnerable to Iranian subversion.

Granular knowledge should lead to humility about what can and cannot be accomplished in a place, and humility should lead to assuming the worst. First-hand observation in the field triumphs over illusion and formulaic reasoning from afar. It is only by assuming the very worst about a situation that a successful intervention becomes possible. After all, only the grimmest human landscapes require intervention in the first place. Indeed, to invade is to govern. And governance requires exhaustive advance planning.

Don’t take humility too far. A common mistake is to overcompensate for previous mistakes. Guilt over the debacle of World War I was the principal psychological ingredient that led the British ruling class to appease Nazi Germany—for fear of another senseless world war. It is always a matter of balance. Just as repeated calls for moral intervention are unsustainable in terms of winning public support, neo-isolationism is unsustainable in an increasingly claustrophobic and interconnected world, where crises regularly and easily migrate from one region of the earth to the other. The Coronavirus is merely one example. We are enmeshed in the world and there is no getting around it.

Short of total war, don’t overemphasize the role of the military. Iraq was a middle-sized war, not a total war. Middle-sized wars, fought with limited means, in which there is an army at the front and a population at the mall, are the kind that mass democracies handle poorly. Middle-sized wars especially require subtlety, with a pivotal, oversized role for diplomacy, intelligence operations, and civil affairs in liberated areas. Learning from Iraq, we should be wary of over-militarizing our conflict with China. Such a course of action could over time alienate liberal establishments in both the United States and Europe.

See beyond the next news cycle. Though the decision to invade Iraq was many months in the making, its catalyst—like that to approve enhanced interrogations—occurred in the immediate aftermath of 9/11, when for several weeks both the public and elite were united and practically baying for blood. Policymakers did not adequately consider that such unity and fervency could not last and that ideas arrived at in the throes of one public mood would be judged by the standards of a very different one.

Foreign policy is a hierarchy of needs, in which cold calculations of interest come before values. And if those interests are properly calculated, values should follow in their wake. Humanitarian interventions like Bosnia and Kosovo occurred after the Cold War was over but before 9/11 and the rise of the Chinese Navy. Such interludes are rare. Saddam was far more murderous than Serbia’s Slobodan Milosevic, but the national interest for removing him, once weapons of mass destruction were not found, proved unconvincing.

Be wary of subjecting foreign policy decisions to long-range historical thinking, since risks and costs must be measured in terms of what is practical at the moment. The people I know who supported the Iraq War truly wanted a more humane and liberal Middle East. And Saddam was not merely a dictator, but a blood-soaked totalitarian incomparable to any other regional tyrant. The goal seemed so worthy. It was actually grandiose.

Robert D. Kaplan is a managing director at Eurasia Group. He is the author of “The Good American: The Epic Life of Bob Gersony, the U. S. Government’s Greatest Humanitarian,” forthcoming in September.