The Abraham Accords and the Imposed Middle East Order 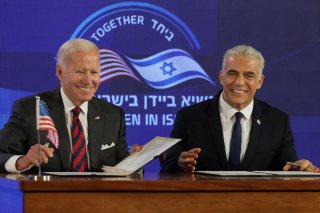 Israel’s military occupation of the Palestinian territories has become more intense, with Palestinians increasingly isolated as a deliberate result of the Abraham Accords. The illegal expansion of Israeli settlements in the West Bank has continued unabated; violence committed by Israeli settlers continues to rise; and Israel still engages in indiscriminate bombings in Gaza, often resulting in civilian casualties. This year, Human Rights Watch, B’Tselem, Amnesty International, and UN Special Rapporteur Michael Lynk all accused Israel of committing the crime of apartheid and have called for international action to combat Israel’s “system of oppression and domination.” The United States has denounced such accusations as “absurd.” More recently, the allegedly targeted killing of Palestinian-American journalist Shireen Abu Akleh by Israeli security forces and the lack of action taken by the United States demonstrated the sense of invincibility that Israel feels it has in Washington. The Abraham Accords have also helped facilitate sophisticated transnational campaigns of surveillance and repression via Israel’s provisioning of hacking technology, which reportedly played a central role in the normalization deals.

Behind these actions, it is ultimately the United States’ unwavering support that allows these governments to act with impunity at home and abroad.

A Counterproductive Framework for Washington

From Washington’s perspective, this order is in many ways the culmination of almost a generation of U.S. Middle East policy that has been rooted in two foundational pillars: staunch support for select Arab autocrats rooted in the “myth of authoritarian stability” and unwavering support for the state of Israel. Persisting throughout the Cold War, the global war on terror, and the period following the 2011 Arab uprisings, Israel and certain Arab autocrats have been continuously viewed as the actors best capable of preserving “stability” and advancing American interests in the Middle East. The Abraham Accords represent an effort by Washington to merge these two pillars more formally, an objective that has historically been unachievable due to various obstacles, particularly a solution to the Israel-Palestine conflict.

The accords have been embraced by both sides of the political aisle in Washington. Despite presenting himself as fundamentally different from Trump, Biden has pursued essentially the same policies as his predecessor vis-à-vis the Abraham Accords and the Middle East more generally. Biden has expressed his strong support for the accords while refusing to reverse any of his predecessor’s controversial policies, such as Trump’s proclamation of West Bank settlements as sovereign Israeli territory, formally recognizing Israeli sovereignty over the Golan Heights, or the recognition of Jerusalem as Israel’s capital. Furthermore, under the Biden administration, Congress has now formally codified the advancement of the Abraham Accords into law through the Israel Relations Normalization Act, which requires Washington to use its power and resources to expand and entrench the accords. American foreign policy in the Middle East now revolves around the Abraham Accords framework.

Through the Abraham Accords, many in Washington have come to envision a more formal coalition through which to advance U.S. interests as America seeks to draw down its direct presence in the Middle East. As Yasmine Farouk argues, “by encouraging regional partners to normalize relations, Washington hopes to redistribute its defense burden among a more integrated defense network of regional allies.” A more formal entity is thought to present the United States with a powerful instrument to advance its regional interests, especially amidst the return of great power competition, both in the Middle East and globally. The Abraham Accords framework appears to be the foundation for further American commitments to the Middle East. Recently, Israeli Defense Minister Benny Gantz confirmed that Israel is building a U.S.-sponsored regional air defense network called the Middle East Air Defense Alliance (MEAD). Not much is known about MEAD, but news of the alliance comes after reports of high-level cooperation among Israel, the UAE, Bahrain, and Egypt to create such a mechanism, and there have been efforts to bring Saudi Arabia. In Washington, bipartisan legislation was recently introduced in Congress calling for the U.S. Defense Department to present a strategy toward integrating such an air defense network in the Middle East that would, according to U.S. Rep. Jimmy Panetta (D-CA), “protect our partners in the region by building off the existing partnership of the Abraham Accords.”

An increased American commitment to the Middle East through the framework of the Abraham Accords is likely to fuel the widespread grievances that lead to instability in the region. These governments have no incentives to change their destabilizing behaviors so long as the world’s only superpower guarantees they can get away with it. Even worse, Washington continues to provide swaths of advanced weaponry to these actors, and it now appears to be contemplating increased security commitments to the region. This is all while neglecting the central role U.S. regional partners play in the destabilization of the Middle East, either through their own repressive and violent actions domestically or their interventionist foreign policies abroad. America’s partners continue to pursue policies directly at odds with the interests of the United States while fueling the grievances and tensions that ultimately lead to unrest.

The Middle East continues to become more exclusionary, repressive, and unstable. Any “peace” that requires the exclusion and intense repression of peoples—be it the Palestinian people or the Arab public—is a recipe for instability. America’s unwavering commitment to the Abraham Accords framework will not only lead to a more securitized and unstable Middle East, but also risks dragging Washington deeper into the region to protect these problematic partners.

Jon Hoffman is a Ph.D. candidate at George Mason University specializing in Middle East geopolitics and political Islam. Follow him on Twitter @Hoffman8Jon,