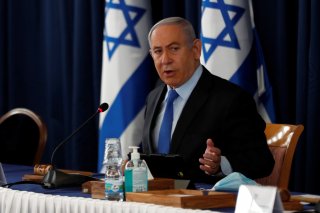 The Abraham Accords, drafted by Israel and the United Arab Emirates, and mediated by the United States, will establish diplomatic relations between the two foes and end decades of hostility. In a joint statement released by all three actors, Israel agreed to suspend its annexation plans, while opening reciprocal embassies with the UAE, as well as advancing economic ties, allowing tourism, and even investing in the development of a potential coronavirus vaccine.

The name of the peace deal—“The Abraham Accords”—holds a unique significance. Abraham, a holy figure to all three monotheistic religions, is often described as a man of peace. Living in a tent with a door at every direction, Abraham intended to welcome everyone into his house, even his staunchest enemies. By naming the peace deal under such a prominent figure, Israel and the UAE hope to portray their commitment to peace. But are Israel and the UAE as committed to peace as Abraham was? To answer that question, we must look into the history and actions of both nations.

The United Arab Emirates demonstrated its commitment to peace on multiple occasions. In its first bold step towards peace, The UAE started to cooperate with Israel against the rising aggression of Iran and its proxies, which has been undermining regional stability and threatening minorities all over the Middle East. In recent years, the UAE has also demonstrated its more inclusive attitude by declaring 2019 as the Year of Tolerance, during which it began the construction of a complex that comprises a Mosque, Church, and Synagogue side by side.

The UAE slowly warmed up to Israel in public by allowing Israeli athletes to compete in international contests held in the country, while displaying the Israeli flag and playing its national anthem after the victories of the Israeli delegations. The UAE also welcomed multiple Israeli ministers, including former Minister of Culture and Sports Miri Regev and former Minister of Communications Ayoob Kara. In the wake of the coronavirus pandemic, the UAE decided to give medical equipment to the Palestinians by sending two Etihad Airways aircraft to Ben Gurion Airport in Tel Aviv, one of which carried the airline’s livery. The Palestinian Authority’s refusal to accept the equipment, merely because it was sent through Israel, spoke volumes about the UAE’s pursuit to peace, which still went ahead despite the likely prospects of firm Palestinian rejection.

The Jewish State had already signed treaties with Arab nations in the past, making concessions a war-seeking state would never do.

In exchange for peace with Egypt, Prime Minister Menachem Begin agreed to return the Sinai Peninsula, a land thrice larger than Israel’s original size and rich with natural resources. To fortify peace with Jordan, Prime Minister Yitzhak Rabin agreed to formally hand them the control of the Temple Mount, the holiest site in Judaism, limiting Jews from accessing and praying there. And while attempting to make peace with the Palestinians, Rabin also signed the Oslo Accords: giving Palestinians their first-ever self-rule under the Palestinian Authority while effectively relinquishing control of Jewish holy cities such as Hebron, Nablus, and Bethlehem.

Following his predecessors’ lead, Prime Minister Benjamin Netanyahu agreed to halt his annexation plans. Betraying his electoral base, Netanyahu demonstrated that Israel’s old commitment to peace is alive and kicking. Yet, the Abraham Accords are fundamentally different than all other agreements, as the UAE has not received any land in exchange for peace. Instead, it received peace in exchange for peace.

Unlike previous agreements that resulted in cold relations between the governments and animosity between the people, the Abraham Accords likely have a true potential of a warm and sustainable peace. Netanyahu’s innovative approach of “peace through strength” was denounced by many traditionalist intellectuals. Yet, he showed them all wrong. For the first time since its independence, Israel is about to sign a peace deal merely for the sake of peace. Therefore, the Abraham Accords fulfill their namesake—signed by peace-seeking countries, in hope of achieving true peace, a prosperous future, and an unparalleled brotherhood between the children of Abraham.

Achiad Kalman is a former IDF spokesperson at the Arabic Media Desk, a former intern at Israel’s Mission to the United Nations, and a B.A Student at St. Lawrence University.