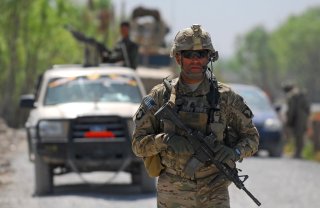 One year after the U.S. military withdrawal from Afghanistan, the Biden administration faces a complex counterterrorism challenge. The successful U.S. strike in July 2022 that killed Al Qaeda leader Ayman al-Zawahiri in Kabul was a blow to Al Qaeda. But with the Taliban’s continuing close relationship with Al Qaeda and the deterioration of Afghanistan into a terrorist sanctuary, the United States needs to rethink its counterterrorism strategy.

Afghanistan is the only country in the world today with a close, working relationship with Al Qaeda. According to one recent United Nations Security Council assessment, Al Qaeda’s leadership “plays an advisory role with the Taliban, and the groups remain close.” In addition, the location where Zawahiri was killed—a safe house apparently owned by an aide to Sirajuddin Haqqani, the Taliban’s acting minister of interior—highlights the intimacy between the Taliban and Al Qaeda.

Al Qaeda does not yet have the ability to plan and execute terrorist attacks in the U.S. homeland, according to the U.S. Defense Intelligence Agency. But there are several concerning developments that should alarm U.S. and other Western officials.

First, core Al Qaeda and its local affiliate, Al Qaeda in the Indian Subcontinent (AQIS), remain active in Afghanistan. AQIS has as many as 400 fighters, including a presence in southern and eastern Afghanistan. Following the U.S. strike against Zawahiri, Taliban leaders—who were furious at the United States for the attack—may allow Al Qaeda more room to maneuver. Even before the attack, U.S. Central Command assessed that the Taliban would likely loosen its restrictions on Al Qaeda and allow the group greater freedom of movement and the ability to train, travel, and rebuild its external operations capability.

Second, Afghanistan is home to numerous other terrorist groups, such as the Islamic State-Khorasan Province (ISIS-K). A U.S. Department of Defense report concluded that “ISIS-K remained the top terrorist threat in Afghanistan with approximately 2,000 members operating in the country.” The group is led by Sanaullah Ghafari (alias Shahab al-Muhajir) and has conducted hundreds of attacks in Afghanistan since the departure of U.S. from Afghanistan. The goal of ISIS-K leaders remains to use Afghanistan as a base for expanding its footprint in the region and creating a broader, pan-Islamic caliphate.

Third, the Taliban is unable to deliver basic goods and services in Afghanistan, a significant worry since failed states are often a necessary, though not a sufficient, condition for terrorism. Afghanistan’s economy is in shambles, thanks to Taliban incompetence and continuing international economic sanctions. The country’s gross domestic product is projected to decline by 34 percent by the end of 2022, compared to 2020, the last full year of the Ashraf Ghani government. The humanitarian situation is also dire, with approximately 24.4 million people, or 59 percent of the population, in desperate need of humanitarian assistance.

In sum, the terrorism landscape in Afghanistan is alarming because of the Taliban’s close relationship with Al Qaeda, the proliferation of terrorist and other non-state groups, and the collapse of governance in Afghanistan. In this environment, the United States has left itself with few options.

In contrast to virtually every other U.S. counterterrorism campaign since 9/11, the United States has no partner force on the ground in Afghanistan. The United States worked with the Counter Terrorism Service and other Iraqi forces in Iraq; local militias in Libya; the Somali government, African Union Mission in Somalia (AMISOM) forces, and clans in Somalia; and the Syrian Democratic Forces in Syria. In Afghanistan today, however, the Taliban is a U.S. enemy, not an ally.

Finally, the United States has no military bases in the region to fly aircraft for intelligence collection or strike missions. The United States withdrew from all bases in Afghanistan, such as Bagram Air Base and Kandahar International Airport, and does not have bases in Central Asia or South Asia. Instead, the United States has been forced to utilize locations such as Al Udeid Air Base in Qatar, which is approximately 2,500 miles from Kabul.

The first is to work with local forces inside and outside Afghanistan to rebuild the U.S.’s intelligence architecture against terrorist groups. The U.S. military and CIA have a long history of working with local Afghan forces—including Hazara, Tajik, Uzbek, and some Pashtun militias—to collect intelligence and conduct counterterrorism operations. Some U.S. activities were orchestrated as covert action programs under Title 50 of U.S. Code, which allows the United States to conduct political, economic, and military activities abroad that are not acknowledged publicly.

The main goal should not be to overthrow the Taliban, but to collect intelligence on terrorist networks operating in Afghanistan. Those U.S. partners—which could range from supporters of the National Resistance Front to the Afghanistan Freedom Front—can provide valuable information on terrorist leaders, training camps, and other activities, which the United States should supplement with intelligence collected from other sources. In addition, there is deep opposition to the Taliban among some Pashtun tribes and subtribes, such as Barakzais and Popalzais, that U.S. intelligence and military units could leverage.

The second component should be to negotiate basing access in the region, especially for intelligence, surveillance, and reconnaissance capabilities. The United States should jumpstart negotiations with countries in the region—such as Kyrgyzstan, Pakistan, Tajikistan, Uzbekistan, and possibly even India—to house manned and unmanned aircraft to conduct intelligence, surveillance, and reconnaissance over Afghan territory.

The Biden administration has started those discussions, but they will be difficult. Allowing the U.S. military or intelligence community to fly strike aircraft could be too politically risky for many of these governments. In addition, Russia has already voiced strong opposition to U.S. bases in Central Asia. But surveillance aircraft could be more politically acceptable for some countries.

A failure to improve the U.S.’s counterterrorism capabilities and posture—particularly by establishing relations with local partners in Afghanistan and negotiating additional bases—will put the United States and its partners at growing risk of a terrorist attack. U.S. intelligence agencies now assess that Al Qaeda and ISIS-K could develop external operations capabilities later in 2022 or 2023. This reality makes it important for the United States to move expeditiously—before the next attack.

Seth G. Jones is senior vice president, Harold Brown Chair, and director of the International Security Program at the Center for Strategic and International Studies (CSIS). He was a plans officer and adviser to the commanding general, U.S. Special Operations Forces, in Afghanistan, as well as the author of In the Graveyard of Empires: America’s War in Afghanistan (W.W. Norton).